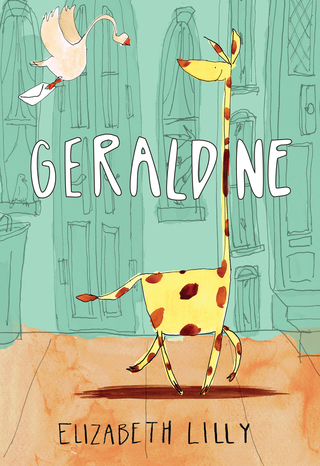 GERALDINE By Elizabeth Lilly (Roaring Brook Press, June 26, 2018)
Elizabeth Lilly didn’t want to be a starving artist so she went to college to be an architect. But when she became distracted by writing stories and doodling all over her floor plans, she transferred to art school. On June 26th, Roaring Brook Press will publish Elizabeth Lilly’s #firstpicturebook GERALDINE—a “funny, thoroughly accomplished debut" (Publisher's Weekly, starred review). Congrats Elizabeth! Looks like your “distraction” paid off!

Q. What inspired GERALDINE?
A. I had a long, thin scrap of paper in my studio in 2013. On a whim, I drew a goofy giraffe barely fitting on the paper, craning her neck to drink out of a tiny glass with a huge, long straw. I pinned her to my studio wall and forgot about her till I needed a main character for a story assignment—she became Geraldine.

Q. How did you pick the title of your book?
A. The original title was LONG, LEAN GERALDINE. At the time, the whole manuscript was in rhyme, so I loved the sound of the rhyming words. I later rewrote the text to be shorter, simpler and un-rhyming, so my editor suggested the simpler GERALDINE.

Q. Do you write by hand or on the computer?
A. For picture books, very much by hand—as an author-illustrator, drawing is a big part of the writing process. I like the looseness of being able to change the words to go with the pictures, or vice versa. I keep my pencil ready in my hand to erase or add words or pictures as needed. It’s usually a Pentel mechanical pencil, which I like because you don’t need to stop to sharpen, and you can buy replacement erasers in bulk.

Q. What is your favorite part of the book? And was that part in the first draft?
A. My favorite part of the book is when Geraldine meets Cassie, who she finds to be just as much an outsider as herself. That part was not in the first draft because Cassie never existed in the first draft. I invented her during the Big Rewrite. In the first draft, Geraldine figures out how to be happy in her new school through a long, complicated subplot where she ruined and then fixed a school play. It took up way too much time in the book and didn’t emotionally resonate in the end. In the rewrite, I figured out that a simpler, more realistic, and maybe scarier challenge for Geraldine in this situation was just to make one single true friend. And so, Cassie was born.

Q. How did you select the names for your characters?
A. I just thought Geraldine was a good, fancy name for a giraffe girl with a big, dramatic personality. Her full name is Geraldine Giraffe, and alliteration always adds a small smackerel of goofy goodness. Cassie is a nickname for Casandra; it’s never mentioned, but in my mind, Cassie is Latina, like I am, maybe in a school where there aren’t a lot of Latino kids. She goes by Cassie in an effort to blend in as much as possible.

Q. How did you decide between telling the story in first, second, or third person?
A. The first draft was in third person, but a writer friend later pointed out that first person narration can add warmth and personality. I changed it to first person for the Big Rewrite and I immediately felt Geraldine’s voice flow out naturally. My friend was right!

Q. How much of the story did you know when you began writing GERALDINE?
A. Almost none! It started with some silly sketches of a giraffe having trouble doing human things—standing taller than a diving board at a pool, laying over five yoga mats in a yoga class. I thought those were fun and interesting, and I was like cool! Done! A book full of funny giraffe drawings. Much later I figured out this character needed a fuller story with more emotional weight.

Q. Did you write the story first, then illustrate it? Or did the images appear before the words?
A. The images first—my stories often start as drawings in my sketchbook of animals or people that seem to be characters that are asking for a story. I don’t have time to write stories for every sketch, so the drawings that happen to turn out extra special and interesting (I think of them as “sparkly”), I develop further into little stories or bits of writing that may or may not go further. For Geraldine, the character popped out visually in my sketches as EXTREMELY sparkly—she and her crazy yoga-mat shenanigans begged for a story right away.

Q. Did GERALDINE receive any rejection letters? If so, how many (ballpark)?
A. I was really fortunate with GERALDINE—I queried mainly by email, asking for art directors, agents and editors to take a look at my work and give me short portfolio review meetings in person in New York. I was humbled and amazed to find the people I contacted were very receptive. 90% of them agreed to meet with me, I only got a few emails back saying, “we are not looking for anyone with your style right now, good luck!” I got a nibble on my first round of meetings that later led to signing my agency agreement.

Q. Describe your reaction when you received an offer on GERALDINE.
A. My biggest reaction was when I got my offer to be represented by my incredible agent, Elena Giovinazzo at Pippin Properties. Months before the offer, I very confidently gave her my GERALDINE dummy basically being like, here’s my amazing book! Where do I sign? Elena gently pointed out an agent-client agreement is best entered gradually, agreed to give me feedback on my book, and said we could work from there. I got an email from her with editorial notes—the manuscript was too long, a lot of key themes were emotionally off, and the completely rhyming text should have no rhymes. I had to throw out almost everything. But at the end of the email she encouraged me to revise and re-submit.

My blind confidence resurged. Great! I thought. She wants me to re-submit! What an invitation! So I thought and drew and sketched and thought for weeks, and finally sent her a newly drawn and written dummy. She sent back a polite email that said she was swamped with work and I should expect feedback within a month. The next day I got a new email from her that seemed more urgent, asking could we talk on the phone? She had something important to discuss. We finally got on the phone the next day and she told me my rewrite was one of the strongest rewrites she’d ever seen! It was nearly ready to sell as a picture book! Would I be her client? It was the best question I’d ever heard, and I was shocked and SO FREAKING HAPPY!! I called everyone I knew (very expensively, I was in Canada and paid roaming minutes) to tell them the news. I had a career!

Q. How long did GERALDINE take to be published—from the time you received an offer until it was printed?
A. Forever. I got my offer in January of 2015, it will be printed in June of 2018. Finally I’ll be able to point to something and say, look! THIS is the thing that made me pull 6 all-nighters in 2016! It’s real!

Q. Was there a part that you really loved but had to edit out? Or did you think of something later that you wanted to add?
A. Just visual stuff, really. I had some simple, graphic endpapers and title-page images that I loved in the first draft of the dummy, but in order to squish in extra narrative elements in the rewrite, I had to throw them out. I still love them, maybe I can find a way to use them if GERALDINE gets a sequel…

Q. Have you read GERALDINE to kids? If so, which part of the book gets the best reaction?
A. Yes, I have! When Geraldine pretends to be the Queen of England and calls the other kids “dahhhhling” it always gets a good laugh. A lot of the book is more serious and thoughtful though so I hear nothing and I start sweating, hoping it’s making some impact on them and they’re not thinking about macaroni and cheese or something.

Q. Did you create any book swag for GERALDINE? If so, what kind?
A. I’d love to make stickers—I think they’re a crowd-pleaser. I’m also a dabbling animator so I’m aiming to make a short book trailer.

Q. What is your #1 tip for picture-book writers?
A. What you say is more important than how you say it. Make sure you have something meaty to say when you write, and a good reason to say it. That reason is what will keep you from giving up during the 6th and 10th and 12th rewrite! Also, when you’re stuck on what to say, sometimes it can help to imagine you are writing a book for your own 8-year-old self. What book would have helped that kid? Or delighted them?

Q. What are you working on now?
A. I’m starting the final art for my second author-illustrator picture book to be released from Holiday House. It’s a prose poem I wrote years ago about the different foods my Colombian Abuela and West Virginian Grandma cooked for me growing up. In my spare time I’m putting huge amounts of pressure on myself to write/draw a new character-oriented story for my third book that is delightfully sparkly and brilliant. It’s going medium-well, on good days.