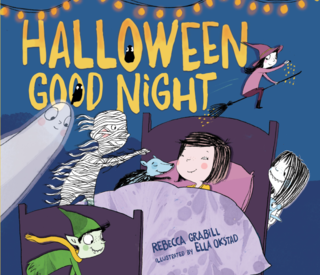 HALLOWEEN GOOD NIGHT by Rebecca Grabill and illustrated by Ella Okstad (Atheneum Books for Young Readers, 2017)
Rebecca Grabill is about to have her sixth child! But like all multi-tasking mamas, she made time for one more thing. Thank you Rebecca for fitting us into your busy schedule! Below is her #firstpicturebook Q&A on HALLOWEEN GOOD NIGHT—a “delightful bedtime riff on the OVER IN THE MEADOW nursery rhyme (Publishers Weekly, Starred Review) and “fun storytime read-aloud that’s just right for the youngest Halloween revelers.” (School Library Journal)

Q. What inspired HALLOWEEN GOOD NIGHT?
A. That’s a complicated question. Ok, not really that complicated, but I will say I never set out to write a Halloween book. During my MFA (Hamline University, 2011) I spent a month reading every Halloween book I could find, examining it, critiquing it. I found that there were a heap of books. And only a handful I absolutely loved. So I decided to try to write something I *did* love, hence the birth of HALLOWEEN GOOD NIGHT.

The second part of the answer involves being a mother and reading a certain picture book Every Single Day for months on end to my oldest child. Which book? A version of OVER IN THE MEADOW. Very cute, very repetitive, very stuck-in-my-brain-forever. It may have been my deep fatigue with OVER IN THE MEADOW that made it the natural inspiration for HALLOWEEN GOOD NIGHT. Because as I read to my son, I’d at times change (in my mind) the little animals to something more interesting than fishies and spiders.

Q. How did you pick the title of your book?
A. The title started off as something like OVER IN THE GRAVEYARD or YONDER IN THE GRAVEYARD. It was briefly GHOULS A LURKING (which I hated but had been worn down into saying, “Whatever, just title it what you want.”). I don’t quite remember how it became HALLOWEEN GOOD NIGHT. It may have been a suggestion from my agent or editor, or maybe I came up with it? But once the title arrived, it stayed.

Q. Do you write by hand or on the computer?
A. A combination. I will sometimes write the roughest rough draft of a picture book on blank paper with huge handwriting. To (supposedly) trick my brain into not focussing on being a perfectionist. Because I am a terrible perfectionist. I’m not sure how well this works, however. Most times I’ll take notes on paper (or a napkin or envelope or… you get the idea) and type up a draft on computer.

Q. What is your favorite part of the book? And was that part in the first draft?
A. I’ll be honest, I loved the rhyme of Six with Transfix, which was indeed in an early draft, but that line was edited out. I understand why, but I miss the word transfix all the same. Isn’t it such a delicious word?

Q. Why did you decide to tell the story in second person?
A. Because I was using the form of OVER IN THE MEADOW, and because I have no single protagonist, first person didn’t really work. I actually tried it in first because some readers didn’t like the use of second person. Ultimately I returned to the immediacy of second person direct address, with the narration in third.

Q. Why did you decide to write the story in rhyme? Did you write a version in prose?
A. I never tried it in prose mostly because a poem (in rhyme) was my model and inspiration. I much prefer prose—rhyme is beastly hard. Rhythm is brutal. Really it’s agonizingly difficult to write good rhyme, weeping and gnashing of teeth sort of agony. I would much rather write in prose, or rub salt on a paper cut or…

Q. How much of the story did you know when you began writing HALLOWEEN GOOD NIGHT?
A. I’d say a good portion of it. I knew, for one, that it needed to have an actual story. Most OVER IN THE MEADOW adaptations don’t have any semblance of story, they’re just counting books. But I very much wanted a beginning, middle, and end. I knew it would involved a Halloween party of some sort, and I knew I wanted a surprise ending. Those were my starting points and the rest grew over various drafts (of which there were many).

Q. Did HALLOWEEN GOOD NIGHT receive any rejection letters? If so, how many (ballpark)?
A. Hmmm. My first agent shopped it to a few publishers, but I don’t remember how many. Five, six maybe? Victoria of Wells Arms Literary (the awesomest agent ever) sent it out to a few editors, we received some feedback, I revised, and then she found an editor actively searching for a Halloween book and got it to her right away, and, well, the rest of the story is obvious!

Q. Describe your reaction when you received an offer on HALLOWEEN GOOD NIGHT.
A. I’m not sure how it works for other authors or books, but with an agent an offer can come in strange ways. For HALLOWEEN GOOD NIGHT I got an email saying something like, “Letting you know I’ll have an offer by tomorrow!” And the next day, which just happened to be Halloween, I snuck out of my kids’ homeschool co-op to take her call in the car. I basically floated around the rest of the day, but it was surreal because the rest of the world didn’t know (or much care) that I’d sold my first book, my kids included. I went quickly from “Hey kids, guess what” to “Stop it, don’t poke her, no I won’t buy you a milkshake.” I wanted to announce it everywhere, but I was terrified I’d jinx it and somehow make Simon & Schuster go out of business or something—because I have that kind of power. Ahem.

Q. What kind of input did you have in choosing an illustrator for the book?
A. Zip. Zilch. Nada. Actually, my amazingly brilliant editor did run a few suggested illustrators by me. Not so much for my approval, more to let me know what she had in mind. The illustrator chosen was not among them, however, so it was all a surprise!

Q. What jumped out at you when you saw the first sketches and jacket cover?
A. Well, the first cover illustration was an awesome silhouette, very artistic and cool. That wasn’t the final cover. I love the cover (actually I loved the first one too!), especially how sweet and cute it is. Not scary at all. Which is vital for a not-scary bedtime Halloween book!

Q. How long did HALLOWEEN GOOD NIGHT take to be published—from the time you received an offer until it was printed?
A. Written in fall 2010, offer in fall 2014, published in summer 2017. As I tell the children, “You do the math.”

Q. Was there a part that you really loved but had to edit out? Or did you think of something later that you wanted to add?
A. I went through So Many Versions of this manuscript between 2010 and 2014, I’m not sure I even remember what’s in it/not in it, you know? I do miss transfix, but I already mentioned that. ;-)

Q. When you do readings of HALLOWEEN GOOD NIGHT, which part of the book gets the best reaction?
A. I LOVE reading this book to the right age group of kiddos. I’ve discovered that very tiny kids, toddlers, aren’t that interested beyond the pictures and rhythm. But 3yr olds, 4, 5, 6, they eat it up. As I read I’ll draw attention to the “unfolding” mystery—“Where are the werewolves headed?” or “They’re at YOUR house!” and truly, they are enraptured, leaning forward, watching, just the tiniest bit anxious that “they” will soon be eaten by monsters. I love the giggles I get with the surprise ending. AND the bacon joke (yes, there’s a dumpster diving/bacon joke—I’m so mature). I’m always surprised by how many kids bust out laughing over the bacon! I mean, I thought it was funny, but didn’t really expect anyone else to find it funny!

Q. What is your #1 tip to those who want to write picture books?
A. Yowzers, how to limit it to one tip… Heed advice. If an agent or editor has an issue, LISTEN. If two out of three test readers don’t like something/are confused by something, LISTEN. Don’t be afraid to start over. Don’t be afraid to experiment. Don’t be afraid to scrap a manuscript entirely. And if an editor/agent offers a detailed critique, DO NOT JUST switch a few words around and call it “revised.” Revision means re-envisioning, not fixing a few spelling or syntax errors.

I guess that’s easy for me to say since I enjoy revision about a million times more than writing the first draft, but unless your book is a flash of genius (and most aren’t), revision (real revision) is going to make even the best start so much better.

But save everything—it will give you freedom to cut that “perfect line” which may well be perfect, but you may not know until it’s gone. (I use Scrivener and take snapshots before each revise.)

In short: writing is joy, but writing is also WORK. Hard work. And if it’s not, you’re doing it wrong. ;-)

Q. Do you have a favorite writing exercise or marketing tip that you can share?
A. Ugh. I know nothing about marketing and have NO idea if my efforts have made even a smidge of difference with HALLOWEEN GOOD NIGHT. But I can say, as for writing exercises, if one has a heap of kids and a lot going on, just sitting in the chair is enough exercise! I don’t believe in “warm ups”—if I tried to warm up for twenty minutes every time I wrote, I’d be exercising, not writing! I also don’t believe in inspiration. Who has time to wait for the muse? Sit, write, live life, repeat.

Q. What are you working on now?
A. I just sent a draft of a middle grade novel to my agent, which she’s sending on to editors. Come November, I’ll do NaNoWriMo, but for picture books! Someone online had a National Picture Book Idea Month, but moved it to January or something. I’m sticking with November, and am shooting for full drafts of picture books. Not thirty, but as many as I can manage. I did this last year and ended up with only one or two to send to my agent (the rest were blech—not things I’d share!). Maybe this year I’ll get three or four?

Thank you for this fun interview!!!

So much great information! Thanks for the insight into the writing and publication process, Rebecca. And thanks, Karlin, for asking such great questions. :)