LONG MAY SHE WAVE 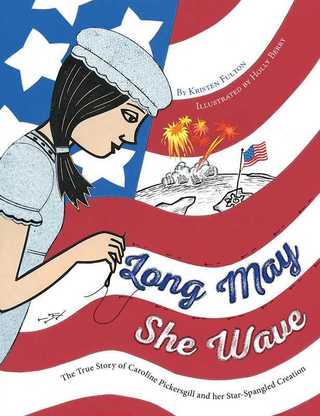 Long May She Wave: The True Story of Caroline Pickersgill and Her Star-Spangled Creation by Kristen Fulton and illustrated by Holly Berry (Margaret K. McElderry Books, May 2, 2017 )
Kristen Fulton began writing children's books in 2013 and a year later she had sold three manuscripts! Today she shares the story behind her #firstpicturebook LONG MAY SHE WAVE—“A strong look at women who up took up needle and thread to inspire a town, a man, and ultimately a nation” (Booklist).

Q. Was LONG MAY SHE WAVE the first picture-book manuscript you ever wrote? If not, what was the first picture book you wrote and what happened to it?
A. No, actually is was the third that I sold. Of course I had written a few that didn’t sell. My two that sold before Long May She Wave were with Chronicle and Simon and Schuster. Chronicle had a vision and kept me a close part of the publishing process. The “ideal” illustrator was booked out so we decided to wait for him. It was worth it in the end. The other story with Simon and Schuster (same as Long May She Wave) was moved to 2018 instead as it needed a little more fine editing work.

Q. What inspired LONG MAY SHE WAVE?
A. My husband and I travel about six months a year in our RV, aka Chalet Fulton. On one of our many travels we stopped in Washington DC and saw the Star Spangled Banner. We decided to head over to Baltimore and tour the Flag House (where the flag was made). Piece by piece the story was revealed and I knew that I wanted to sew this one together. So, we set up camp for two weeks and I went into serious research mode.

Q. How did you pick the title of your book?
A. This was an easy one since it is based on the Flag.

Q. What is your favorite part of the book? And was that part in the first draft?
A. My favorite part is in the final and has been there since draft one. It is where I took words from the "Star Spangled Banner" and wove it into the story so readers could see them used in context.

Q. What kind of resources did you use in your research for LONG MAY SHE WAVE?
A. I visited the home. Pulled property records and censuses. I visited the Smithsonian. Spoke to several historians. I visited Ft. McHenry. Got primary resources from daily papers about the British marching to Washington and then on to Boston. I also got a letter from Caroline Pickergil’s daughter.

Q. How did you decide on where to start and end this nonfiction story?
A. I knew that this was going to be about one small part of history, not a biography, but about an event. So it was easy. I decided to start it and end it with the event.

Q. Did LONG MAY SHE WAVE receive any rejection letters? If so, how many (ballpark)?
A. No, except from my agent :-) She wasn’t crazy about it but Justin Chanda from Simon and Schuster had just contacted her to see all of my work so she included it and voila!

Q. Describe your reaction when you received an offer on LONG MAY SHE WAVE.
A. Vindicated? I have heard over and over that I haven’t paid my dues. I am still fairly new to writing. I began my writing career in January 2013. Even the head of my regional SCBWI felt that people would not give me credit as a writer since I haven’t “paid my dues.” Selling a third story on my one-year anniversary validated this career choice for me. I work at least 40 hours a week writing, attend two to four conferences and retreats, and participate in about two classes per year.

Q. What kind of input did you have in choosing an illustrator for the book?
A. I had none on this book. Although once the illustrations were done, they did listen to my opinion about historically inaccurate items.

Q. What jumped out at you when you saw the first sketches and jacket cover?
A. OMG—That is my book!!! I think the best moment was being told it was available for preorder on Amazon. I was surrounded by friends and they got to tell me. I was happy, cried, and an emotional wreck all at once.

Q. How long did LONG MAY SHE WAVE take to be published—from the time you received an offer until it was printed?
A. I sold the book in January 2014. 3 years and 4 months.

Q. What is your #1 tip to those who want to write picture books?
A. Think like a kid. Ask yourself, “What will a kid find interesting?” NOT, WHAT DO YOU THINK THEY WILL FIND INTERESTING.

Q. Do you have a favorite writing exercise that you can share?
A. I created a compass that I fill out. It is available for download on my website at http://www.kristenfulton.org/uploads/1/8/4/4/18447485/website_compass.pdf.

Q. What are you working on now?
A. I am working on a few I CAN READ series books for Harper, a series for Charlesbridge, and an adult novel.