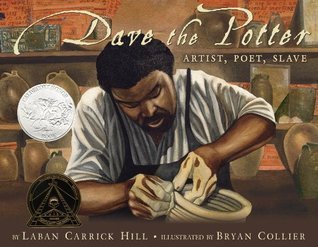 DAVE THE POTTER by Laban Carrick Hill and illustrated by Bryan Colliers (Little, Brown, 2010)
Laban Carrick Hill is the author of more than twenty-five books, including National Book Award Finalist HARLEM STOMP! and the "completely awesome" (Time) WHEN THE BEAT WAS BORN . Today he shares the story behind his first nonfiction picture book, DAVE THE POTTER .

Q. What inspired you to write the nonfiction picture book, DAVE THE POTTER?

A.I’m a gadfly and show up at all kinds of events and conferences where I wouldn’t normally belong. I’m curious about everything. In 2002 I went to a Middle Passage Conference back. Though most of the presentations were boring and very academic, there was one presentation about African influence in African American art. (I tell this in more detail in the back matter of my book.) At one point during the presentation, a slide went up with a pot that had a poem written on it’s side. I had never heard of this potter poet, and I found the poem powerful and moving. I wrote the name and the poem down without any intention of writing a picture book. I just found his story fascinating.

Q. What kind of resources did you use while researching DAVE THE POTTER?

A. When I went home, I started researching Dave online. I found almost nothing on him. There was one exhibition catalog and one or two academic articles, but no books. No one knew much about him. I ordered the catalog and in the back was a list of poems. The poems were skillful and thoughtful in a way that resonated through the centuries the way good poetry does. I saw the kinds of 19th century themes that are prevalent in Whitman and Dickinson as well as themes that were unique to him and his circumstances. It inspired me to want to start a conversation with Dave and his work so I began writing a poem, not a children’s poem, but just a poem. I brought it to my poetry writers’ group and we workshopped it. All the members of the group are published poets. In addition, I have a MFA in Poetry from Columbia University School of the Arts. Over the decades I’ve studied with three Nobel Prize Winning poets and seven Pulitzer Prize winning poets.

My favorite part of the book is the spread where Dave spread his arms out and hanging from the limbs of the tree behind him, like a bottle tree, is the history of African American culture. What makes this illustration so wonderful and why it works so well with the words is that Brian doesn’t just literally represent the images I describe in my words, which is about Dave curling up in a ball in the pot and being embraced. Rather, he takes the spirit of that embrace and opens it up to reveal the breadth and width of African American existence. The way image and words have a conversation on this spread is what the best of picture books do. There is no failure of imagination, which is the case in so many picture books, even good ones.

This was part of the early drafts of the poem, but not exactly as it appears in the book. I wrote around 30 or more drafts of this poem. It took many different permutations. At one point it was rhymed couplets because I couldn’t figure out how to turn this into a kids’ picture book. There are two similes that I put in the poem that made it clear to me that I was finally reaching my audience. They were “like a magician pulling a rabbit out of hat” and “as fast as a carnival’s wheel of fortune.” When I got to those similes I knew I had found the right voice for the piece.

Q. How did you decide where to start and end this nonfiction story?

This was certainly one of the biggest challenges for me. But this is the case for every book I write. I always start with big ideas and huge ambitions. The thought of trying to represent slavery and create a discussion about slavery—and the long history of terror, rape, slavery, and murder that America is built on—made for some very long drafts of the poem. It wasn’t until I decided to just let Dave’s actions as a potter be a kind of massive metonymy/synecdoche for the larger themes that the poem really began to come together. What he does and who he is—his on-the-ground life, his massive pots, his poems—told that larger message without me mediating it with my words. In fact, I think it would have diminished the book—as well as been patronizing—if I had tried to do something like that. I can’t speak for Dave. I—and anyone else for that matter—can barely interpret his life with the few, random clues that have been left behind.

Q. Did you receive any rejection letters when you submitted this story to publishers? If so, how many (ballpark)?

A. The book was rejected by 12 major publishers including Little Brown, its final home.

Q. Describe your reaction when you received an offer on DAVE THE POTTER.

A. Editors did not get interested in the book until Harlem Stomp! A Cultural History of the Harlem Renaissance was a 2004 National Book Award Finalist. It was while I was down in NYC for the awards ceremony when my agent started to receive revived. Then Scholastic, Hyperion, and Little Brown came back to my agent with concrete offers, which were significantly higher than either I or my agent had imagined before the recognition for Harlem Stomp! I even received an email from the publisher at Hyperion at the time who told me that my poem had made her cry.

I ended up choosing Little Brown, even though they had originally rejected the book, because of the way they promoted Harlem Stomp! and really put their weight behind it. I had had the opposite experience with both Scholastic and Hyperion in the past with books of mine that they published.

The best publishing houses that I have worked with over the years have been Little Brown and Roaring Brook, who published When the Beat Was Born: DJ Kool Herc and the Creation of Hip Hop. But you have to remember publishing isn’t like it was thirty years ago when a publisher would get behind you and stick with you. Now, every time I put a book on the market it’s like I’m beginning all over again for the first time.

Q. What kind of input did you have in choosing an illustrator for the book?

A. I was very involved in choosing the illustrator. My wife at the time had been in charge of choosing illustrators for Sports Illustrated magazine as well as other publications. She had also designed Harlem Stomp! and America Dreaming. So we had many discussions with the art director and editor. Bryan Collier was ours and Little Brown’s first choice right off, but it turned out he was booked. LB wanted to choose a top African American illustrator, but all of them had contracts for illustrating books several years in advance, and some were no longer illustrating books with African American themes and content. Then, in 2008, four years after LB purchased the book, Bryan Collier contacted LB that he was now free. One of his books dropped out, and he would like to illustrate Dave. As you can imagine, I was ecstatic. The work he did on Dave lifted that book from the mere mortal stratosphere to the immortal.

Q. What jumped out at you when you saw the finished book?

A. Bryan Colliers illustrations. A picture book is not a word book. The words in a picture book need to serve the illustrations, not the other way around, even though the illustrations would not exist if not the words had been written first. What I tried to do was provide artfully descriptive language that would be a springboard for the illustrator to do their thing. It was humbling for me to see how Bryan responded to my words in such an imaginative and original way. I feel like Bryan and I had a real conversation.

Q. How long did DAVE THE POTTER take to be published--from the time you received an offer until it was printed?

Q. If you could reprint the book today, is there anything you would change? (Was there a part that you really loved but had to edit out? Or did you think of something later that you wanted to add?)

A. No, I think the book speaks for itself. There have been times when I have received my copies of my published book in the past and I have sat down and completely rewritten the book for my own satisfaction. Dave the Potter was not one of those books.


Q. At readings of DAVE THE POTTER, which part of the book received the best reaction?

A. The gatefold. They way it functions is a lot of fun to read. I make it a big deal when I get to it.

A. Well, I hear from a lot of people who want to write picture books. They somehow think it is easier to write a picture book than a novel. I’m always reminded of Blaise Pascal’s famous quote, “Je n'ai fait celle-ci plus longue que parce que je n'ai pas eu le loisir de la faire plus courte.” Because you are publishing on 700-1000 words or less, you have to worry over these words more than anything else you could ever write. To do that, you need to follow some advice I received from the Pulitzer Prize Winning poet Ellen Bryan Voigt, “Well, you need to put your butt in the chair every morning and write. It’s a job and you need to show up for it every day.” I have known a number of writers who are much more talented than me, but did not follow that advice. They no long write.

To learn more about Laban's books, visit his website.
.
1 Comments

This is such a moving book! Thanks for sharing it here, Karlin!