DARIO AND THE WHALE 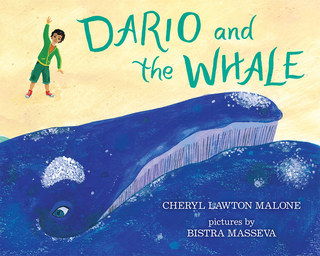 Q. Was your first published picture book, DARIO AND THE WHALE, also the first picture-book manuscript you wrote? If not, what was the first book you wrote and what happened to it?
A. DARIO was not the first – definitely not! The first picture book I wrote was a rhyming story about houses called A HOUSE IS . . . . I submitted it to an agent in the amazing 12x12 Picture Book Challenge, hosted by the amazing Julie Hedlund, and received a lovely rejection saying concept books were hard to sell.

Q. What event or person inspired DARIO AND THE WHALE?
A. DARIO was inspired by a true-life experience – I spent a month at the Norman Mailer Writer’s Colony in Provincetown, MA on retreat trying to finish a YA murder mystery. The wonderful people who run that program let me bring my dog, which is why he and I were walking on a empty beach one morning in April. Chief and I heard a whoosh. I stopped. Chief barked. A juvenile right whale raised its head out of the sea and looked right AT US, as if he was just as curious as we were. Those few seconds—when each of us realized the others were there—inspired me to write about a boy who meets a friend and a whale who meets a boy. I share the experience with readers in the author’s note at back of the book.

Q. How did you pick the title of your book?
A. Once the name of the boy came to me—Dario—the title followed.

Q. How did you select the names for your characters?
A. I needed the perfect boy’s name. A name with character. A name that would evoke the idea of a shy boy, an immigrant boy. During a morning of volunteer work at an elementary school in Boston, I met a real boy named Dario who was exactly how I imagined my Dario would be, and so I borrowed his name.

Q. How much of the story did you know when you began to write?
A. Only the ending. The connection that forms between Dario and the whale.

Q. Describe your reaction when you received an offer on DARIO AND THE WHALE.
A. Euphoric! Over the Moon. Beyond the beyond! DARIO is my debut picture book. I couldn’t believe someone loved Dario as much as I did.

Q. What kind of input did you have in choosing an illustrator for the book?
A. Zero! My editor and the art director at Albert Whitman chose the illustrator. They’re experts. They know the field for art, design, color, etc. They had an idea for the book and picked an illustrator who they thought could make it happen.

Q. What jumped out at you when you saw the first sketches and jacket cover?
A. How beautiful Dario was! And the whale! Oh my God, I loved the whale the minute I saw him.

Q. How long did DARIO AND THE WHALE take to be published--from the time you received an offer until it was printed?
A. December 2014 to March 2016. So sixteen months.

Q. Is there anything you would change in the book today if you could reprint it? (Was there a part that you really loved but had to edit out? Or did you think of something later that you wanted to add?)
A. I’m thrilled with DARIO the way it is. We changed a few things in the editorial process. Nothing I would add back in. Before I submitted DARIO to my agent, however, I revised it multiple times, maybe ten or more— including trying a nonfiction version. I have a very patient writer’s group!

Q. What are you working on now?
A. I’m always working on picture books—trying new ideas, revising old ones. But the manuscript I’m thinking about most these days is a middle grade novel in verse.

Q. What is your #1 tip to those who want to write picture books?
A. Write! Write in the morning. Write at night. Write while your kids are at the dentist. Write when your spouse goes to sleep. And when you’re not writing, read and think about picture books.

Thanks Karlin for the chance to talk about Dario!!!

That was me commenting!

Can't wait to read this one!