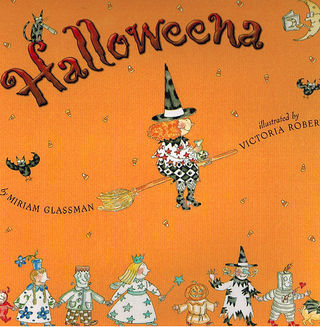 HALLOWEENA by Miriam Glassman and illustrated by Victoria Roberts
Miriam Glassman is the author/illustrator of CALL ME OKLAHOMA!, selected as one of the New York Public Library's "Best 100 Children's Books of 2013." She is also the author of a humorous middle-grade novel, BOX TOP DREAMS. But today we are chatting with her about her very first picture book, HALLOWEENA.


Q: Was your first published picture book, HALLOWEENA, also the first picture book manuscript you ever wrote? If not, what was the first book you wrote and what happened to it?
A. HALLOWEENA was the second picture book I ever wrote, and the second book I published. My first picture book was a wordless story about a girl having a great time with her finger paints. When I showed it to publishers, they liked it but told me that wordless books were on their way out, and I should come up with an accompanying text. For some reason, I never did. Instead, I focused on writing a humorous middle-grade novel that became my first published book, BOX TOP DREAMS.

Q: What event or person inspired HALLOWEENA?
A. My eldest daughter inspired this story when she was very young and said, “What if there was a queen who so mean, all she ever ate was burnt cupcakes?” At the same time, I was somewhat obsessed with the score from the Sondheim musical, Into the Woods, particularly the storyline of the witch and her attachment issues with her daughter, Rapunzel. Somehow, thoughts of Rapunzel came together with those of the burnt-cupcake eating queen. I turned her into a witch, and imagined her as the sister of the witch from Rapunzel. I wondered what would happen if that baby was left in the sister’s hands to raise. Though I didn’t consciously set out to write an adoption story, that’s what it turned out to be. Perhaps subconsciously, I was thinking about my two adopted nieces.

Q: How did you pick the title of your book?
A. HALLOWEENA was the original title, but the editor was afraid that it would limit the book to the Halloween shelf, despite the fact that it’s really a parent-child story. We tried very hard to come up with a different title, even crazy things like “A Broom of her Own,” which sounds like a Cinderella story to me. So in the end, we agreed that HALLOWEENA was the best title.

Q: What is your favorite part of the book? And was that part in the first draft?
A. My favorite part is when Hepzibah tries to be a good mother and literally makes more friends for HALLOWEENA from an “Instant Friend Mix.” The text was in the first draft, but the idea of the box mix was a brilliant element that the illustrator, Victoria Roberts, added to the story.

Q: How did you select the names for your characters?
A. Ever since reading Hawthorne’s The House of Seven Gables, I have loved the name, Hepzibah. So when it came to writing my story, I knew I’d found a name with just the right amount of witchiness that would also be fun to say aloud.

Q: How did you decide to tell the story in first or third person?
A. Because my story is based on a fairy tale, I felt it should have a fairy tale feel to it. So from the very first draft, it was in third person. Also, by not telling it all from Hepzibah’s point of view, it was much easier to show the mother-daughter struggle.

Q: How much of the story did you know when you began to write?
A. I knew the feeling I wanted more than I knew how I was going to express that feeling. I wanted to show how the daughter works to embrace both her witch and human identity, and the mixed feelings of her mother. I wanted to show how Hepzibah grows in her new role, and how her daughter guides her there. But the only specific thing I knew from the start was that I wanted a candy cornfield.

Q: Describe your reaction when you received an offer on this book.
A. I was gobsmacked when I received an offer on the book from Atheneum. You see, I had sent it to a different publisher and had been waiting a long time to hear back from them. Turned out, the manuscript had been handed to my editor as something she might like but at some point, it fell behind a filing cabinet. When my editor was packing up to move to Atheneum, she discovered the dusty text, and then good things happened!

Q: What kind of input did you have in choosing an illustrator for the book?
A. Unlike most writers, I was involved in discussions about possible illustrators. Having done some illustration myself, I had a pretty well-formed idea of how I wanted the story to look. I knew it had to be whimsical and a little quirky. Coincidentally, I had a single New Yorker cartoon stuck on my refrigerator, and it was by the wonderful Victoria Roberts. When my editor called to tell me that Victoria was going to illustrate HALLOWEENA, well, it felt both fantastic and a little spooky!

Q: How long did HALLOWEENA take to be published--from the time you received an offer until it was printed?
A. It took almost three years from contract to published book. It takes time to find the illustrator who is both a good match for the text and whose dance card is not so full that you have to wait eons till they are available.

Q: Is there anything you would change in the book today if you could reprint it? (Was there a part that you really loved but had to edit out? Or did you think of something later that you wanted to add?)
A. There isn’t much I would change about the book. But for today’s market, in which picture books are mostly geared toward very young children, I would probably have to cut the text down significantly.

Q: Can you share any funny or memorable parts of letters from kids about HALLOWEENA?
A. Most of the letters I get from kids are wonderful interpretations of the illustrations accompanied by very kind notes about being inspired to write stories. So that feels really good.

Q: When you did readings of HALLOWEENA, which part of the book gets the best reaction?
A. When I read Halloweena aloud, the kids especially love HALLOWEENA'S training broom and Hepzibah’s alliterative and rhythmic way of speaking, such as when she says, “I’ve raised rats, bats, and broccoli, but I’ve never raised a child.” It’s great when kids delight in the sounds of words, which is something I was very conscious of when I was writing the book. Picture books are meant to be read aloud, so writers should use language that they would love to hear themselves.

Q: What is your best tip to those who want to write picture books?
A. My #1 tip to those who want to write picture books is read a LOT of picture books. Go to the library and grab any picture book whose jacket art, title, or subject matter appeals to you. You will wind up schlepping away an embarrassingly heavy tote bag. No matter. Read the books and see what you like about them, or what you don’t. Do I get a #2 tip? If so, I would say, write the story that is yours to tell. Don’t try to redo something already out there. If it comes from your heart and soul, and delights you in some way, that will shine through even the roughest drafts. And trust me, there will be plenty of those. You need to love your characters and story in order to see them through the rough times and the rough drafts.

Thanks so much, Karlin, for inviting me to visit to your blog. HUGE congratulations and all best “witches” on your upcoming book!
To learn more about Miriam Glassman and her books, visit her website.
Be the first to comment
Loading…}