ODE TO AN ONION 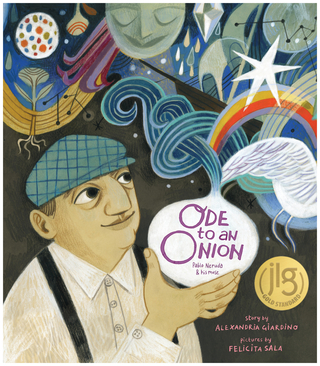 ODE TO AN ONION by Alexandria Giardino and illustrated by Felicita Sala (Cameron Kids, 2018)
A writing instructor in the Bay Area, Alexandria Giardino was translating a memoir when inspiration struck. But her #firstpicturebook manuscript was rejected, again and again. Just about to give up, Alexandra then received an offer on ODE TO AN ONION—“a sweet story about the creative process” (Kirkus Reviews) and reviewed last week by the New York Times as one of the “Picture Book Biographies to Dazzle a Fact-Loving Child”.

Q. Was ODE TO AN ONION the first picture book manuscript you ever wrote? If not, what was the first picture book you wrote and what happened to it?
A. ODE TO AN ONION is officially my second picture book manuscript, which I started working on in 2013. I had the seed of an idea for my very first picture book in 1999, and that book is still evolving! The story was originally about an elderly, blind pelican and a young pelican that takes the old pelican for one last flight over a bay. The story has morphed into one about two snow monkeys. I just cannot let go of the story’s heart, which is about how a younger animal thanks an older animal for all that it has learned. Maybe one day the story will be publishable!

Q. What inspired ODE TO AN ONION?
A. I was inspired to write ODE TO AN ONION by a memoir I translated, called MY LIFE WITH PABLO NERUDA, written by the poet’s wife, Matilde. In that book, Matilde described the whimsical garden of her childhood home. It was a place where celery and garlic grew amid rose bushes. I just knew it would be a perfect place for a children’s story.

Q. How did you pick the title of your book?
A. ODE TO AN ONION is based on Pablo Neruda’s poem, “oda a la cebolla.” We only changed the article “the” to “an”!

His poem is featured in the back matter, both in the original Spanish and in my own English-language translation. Throughout the story, including in the artwork, there are many nods to the poem, such as “their stalks do look like swords.”

Q. What is your favorite part of the book? And was that part in the first draft?
A. My favorite part of ODE TO AN ONION is when Pablo’s mind and heart explode with inspiration to write a poem for the humble onion. I wrote so many drafts of this story, but I always knew that the climax would be the moment of inspiration. Seeing Felicita Sala’s visual rendering of that scene made me so happy because she brought the moment to life in a whimsical and dramatic way.

Q. What kind of resources did you use in your research for this story?
A. ODE TO AN ONION is not precisely nonfiction because it is not a true story. Instead, it is inspired by true events. That said, it is heavily researched and documented, so I am confident that the spirit of the story honestly reflects the spirit of Pablo and Matilde’s life together, as well as his odes and their lively garden at their home in Santiago, Chile. To write the story, I drew on Matilde’s memoir, Pablo’s odes, and the time I spent living in Chile, where I visited their home multiple times.

Q. How did you decide on the timeframe of this nonfiction story?
A. I decided to focus on a single moment in the life of a poet, a moment when the writer is struggling and needs to find inspiration. Monica Brown had already written a lovely full biography of Pablo Neruda, so I wanted to offer readers a more poetic and metaphorical story about him.

Q. What information do you include in the back matter?
A. ODE TO AN ONION includes a brief biography of the poet and his wife, along with “oda a la cebolla” and my English-language translation of the poem.

We also included my favorite image of the couple, a photo that centers your attention on Matilde, who is playing guitar and singing. For me, this book is just as much about Matilde, an artist in her own right, because she inspired Pablo and so often cheered him up.

Q. Did ODE TO AN ONION receive any rejection letters? If so, how many (ballpark)?
A. ODE TO AN ONION was rejected many times! Querying can be such a depressing process. I sent the manuscript to about forty agents, and I also sent it to one publisher directly. That publisher was very close to buying it, but ultimately passed.

Q. Describe your reaction when you received an offer on ODE TO AN ONION.
A. I had received what I thought was my final rejection, and I was about to put the story away for good. I felt that maybe the book just wasn’t meant to be. Around that time, I had been working closely with Amy Novesky on editing the story, and much to my surprise, she pitched the book to Cameron Kids. They immediately made an offer. This all sounds like such a cliché publishing story. But this is how it really happened: just as I was about to give up, the book found the perfect publisher. Cameron Kids loved my story and has championed it all the way.

When they made an offer to me, I cried. Also, I saved the envelope that Amy sent to me with the final draft and offer. I will always cherish that envelope.

Q. What kind of input did you have in choosing an illustrator for the book?
A. Cameron Kids gave me a big say in selecting the illustrator. I sent them many ideas, and when they found Felicita Sala and recommended her for the project, I knew she was perfect. I love her style, which felt midcentury and European in its sensibility.

Q. What jumped out at you when you saw the first sketches and jacket cover?
A. I learned so much from watching Felicita’s process. I got to see the earliest color palettes and renderings of Pablo and Matilde. I also saw the first storyboards. Because I have a lot of primary-source material about Pablo and his life, I was able to share images with Felicita so that the book would be visually accurate. For example, she originally Matilde depicted her with brown hair. I told Felicita that Matilde had auburn hair, and now in the book, Matilde has the most beautiful red hair!

We had two possible jacket covers, and I loved both. We ultimately went with the one that features Pablo very prominently. The other cover art has been used as a poster and on other publicity materials.

I deeply appreciate how much Felicita co-created a book with me, by bringing her own voice and style to the project.

Q. How long did ODE TO AN ONION take to be published—from the time you received an offer until it was printed?
A. I signed my contract in late 2016, and the book was released in October 2018.

Q. Was there a part that you really loved but had to edit out? Or did you think of something later that you wanted to add?
A. No. In fact, in the editing process, the senior editor at Cameron Kids, Nina Gruener, made an edit that I loved! She suggested the line about the tomatoes and fennel “doing a tango.” (I had written that they were “fighting like siblings”.)

Q. When you read ODE TO AN ONION to kids, which part of the book gets the best reaction?
A. Kids always laugh at the line about the tomatoes and fennel doing a tango.

Q. Did you create any book swag for ODE TO AN ONION? If so, what kind?
A. We made posters, bookmarks, and post cards for bookstore and school events.

I also made coffee mugs with the cover art on them for myself and a few family members, and I made a special gift for myself: a canvas tote bag with cover artwork on it. I use the tote bag to carry the book and my special green pen to all my events. By the way, Pablo only wrote in green ink, so I only sign my book in green ink, too!

Q. What is your #1 tip for picture-book writers?
A. I cannot stress enough how important it is to have a trustworthy and smart critique group. I have been part of a writing group since 2013. We meet on the first Friday of the month. I also have three other writer friends who swap work with me. Their feedback is vital. You just have to have other readers show you what isn’t working and why.

Q. Do you have a favorite writing exercise or marketing tip that you can share?
A. In terms of marketing, I strongly suggest building community online, reaching out to writers whose work you admire. Share your work by supporting other peoples’ work. We are in this together. I really believe in that ethic.

Q. What are you working on now?
A. I have three picture books in the works. Two are inventive nonfiction, and one was inspired by a friend’s young son, who had a most unusual request for Santa.

Q. Was there a public launch for the book (reading/part at bookstore, library, etc.)?
A. This fall, we had an official launch at the best bookstore on the planet, Book Passage, in Corte Madera, California. Book Passage maintains a lively writing community and hosts hundreds of writing groups, readings, classes, and public events. I am so lucky to live near that bookstore and call the place my friend.

Since then I have visited five other wonderful, locally owned bookstores, and I will visit sixteen schools.

Photo highlights of all of these events are posted on my website.

If you have read ODE TO AN ONION, please consider writing a review:
Amazon
GoodReads