BARK AND TIM: A TRUE STORY OF FRIENDSHIP BASED ON THE PAINTINGS OF TIM BROWN 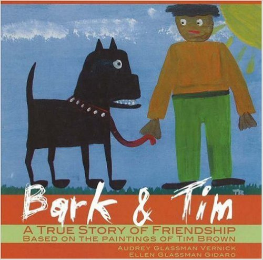 BARK AND TIM: A TRUE STORY OF FRIENDSHIP BASED ON THE PAINTINGS OF TIM BROWN by Audrey Glassman Vernick and Ellen Glassman Gidaro (The Overmountain Press, 2003)
Award-winning author Audrey Vernick writes fiction and nonfiction children's books like UNLIKE OTHER MONSTERS
and THE KID FROM DIAMOND STREET.
But today she looks back 15 years and reflects on her first picture book, BARK AND TIM—how it came to be and the 26 rejection letters that came with it.

Q. Was your first published picture book, BARK AND TIM, also the first picture book manuscript that you ever wrote? If not, what was the first book you wrote and what happened to it?
A. I took a writing-for-children class as an undergrad and a graduate level class, both at Emerson College, that yielded some not very memorable manuscripts. I am comforted by the knowledge that they don’t exist anywhere in this universe.


Q. What inspired you to write the nonfiction picture book, BARK AND TIM?
A. I came across a painting, “Feeding Bark,” on ebay of all places and I was smitten. I showed the picture to one of my sisters, a second-grade teacher, and she said something like “That belongs in a children’s book.” And so it went from there.

Q. Describe the process of using Tim Brown's paintings to tell a story.
A. The process was not as we envisioned it at the outset. We thought we’d do an in-person interview or a phone interview with Tim Brown, but everything was done through the mail. It turned out to be a very slow—and also thoughtful—way to proceed through questions and answers.

We saw some pictures that led us to specific questions (Did you have more than one dog? What made Bark the most special of those dogs? Did everyone in your family like Bark?) The shape of the story emerged as we gathered information. We asked him to create some new paintings to fill in holes and he very generously obliged.


Q. Your sister was your coauthor. How did that collaboration work?
A. Really well. It was before email/Skype, so we did most of our work in person. I live in New Jersey and she’s an hour and a half away in Pennsylvania. I remember sitting in her basement and we were so stuck on one point and I had been reading some craft books and one suggestion was instead of trying to come up with one solution, shoot for five. So we went into opposite corners of her basement and eeked out some language to get us throw a thorny transition. That proved to be a technique I’d return to.

It’s worth noting that my sister and I have nearly identical literary taste. 98 percent of the time, we are on the same page about the books we read. This is a very helpful quality in a co-writer.

Q. What resources did you use while researching Tim Brown?
A. We relied heavily on Tim himself. The ultimate primary source.

Q. What is your favorite part of the book? And was that part in the first draft?
A. I’m proud of the way we handled the death of Tim’s beloved dog, Bark. And I do believe it was part of the first draft (it was written over 15 years ago!)

Q. How did you decide where to start and end this nonfiction story?
A. A boy and his dog story—it was clear to us that it started with his desire for a dog—one we wholly related to. And it had to end not with the death of the dog, but in the way Bark is still thought of and loved and admired because of Tim’s life as an artist.

Q. Describe your reaction when you received an offer on BARK AND TIM.
A. Would you like to first know our reactions to the 26 rejections that came first? A few near misses in there. Our reaction was equal parts disbelief and relief.

Q. What jumped out at you when you saw the finished book?
A. There’s something about the jump from F&Gs to finished book that’s hard to explain. It has to do with endpapers and the hard cover—but has everything to do with realness of it. I always feel that way the first time I see a finished book.

Q. How long did BARK AND TIM take to be published--from the time you received an offer until it was printed?
A. I can’t remember when we started. But I would guess five years. It took a long time, in a pre-email world, to garner 26 rejections. I regret the time we let it be tied up in a required exclusive submission—especially in the case of the one person who NEVER responded. To an exclusive.

Q. If you could reprint the book today, is there anything you would change? (Was there a part that you really loved but had to edit out? Or did you think of something later that you wanted to add?)
A. I think I’d leave it just as it is. Which is something I didn’t think about until I came across this question, so thank you for that.

Q. Can you share any funny or memorable parts of letters from kids about BARK AND TIM?
A. The memorable responses are more from in-person readings. It was the same everywhere:
Child : I had a cat that died.
Child 2: I had a hermit crab that died.
Child 3: My parents had a dog before I was born. It died.
Child 4: Once I saw my cousins’ dog and I got to stay with them. That dog died.


Q. At readings of BARK AND TIM, which part of the book received the best reaction?
A. Nothing comes to mind (again—long time ago)! But at nearly every reading—it was uncanny!—there was an adult in the corner, crying. And that adult would approach me and tell me about her beloved dog. Who died.

Q. What is your #1 tip to those who want to write picture books?
A. Don’t get so stuck on publishing one particular book that you forget to write others. I’m happiest when I’m in various stages of the game on a number of different manuscripts.

To learn more about Audrey's award-winning books, visit her website.

Dog fan here, so this is a must read! Thanks for sharing, Karlin, and congrats, Audrey & Elen!!