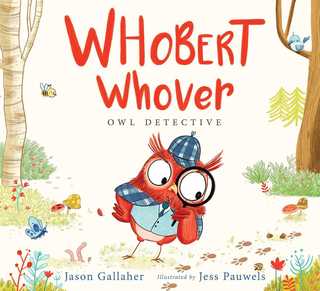 Q. Was WHOBERT WHOVER, OWL DETECTIVE the first picture book manuscript you ever wrote? If not, what was the first picture book you wrote and what happened to it?
A. WHOBERT actually was the very first manuscript I ever wrote. However, I just recently found a first draft, and how WHOBERT looks today is not even close to how the manuscript originally looked (and I will never ever ever ever EVER let anyone look at that first draft. Lord and Taylor, was it a doozy). I was so intimidated by picture books at the time, but I really wanted to try my hand at them because they can be so move-you-to-tears beautiful or laugh-til-your-ribs-hurt funny.

Q. What inspired WHOBERT WHOVER, OWL DETECTIVE ?
A. I typically write by titles, and one day while trying to get through a grad school paper on Shakespeare, the name just came to me. So I immediately put that paper aside and started thinking about who, who this owl detective was.

Q. How did you pick the title of your book?
A. I really don't know how any of the titles come into my head. Titles are always the seed for a story idea for me. When a title pops into the jumbled mess of unicorns and merpeople and Anjelica Huston movies that typically inhabit my gray matter, I don't know what the story is that accompanies that title. It usually has to simmer a bit before the story follows.

Q. What is your favorite part of the book? And was that part in the first draft?
A. My absolute favorite spread is when Whobert first discovers Perry the Possum lying awfully still, and pokes and pushes and pulls Perry to see if he's okay. That was in there from the beginning, but Jess Pauwels's illustrations are hysterical and really brought the moment to life! The first time I saw that spread I could not stop laughing!

Q. How did you select the names for your characters?
A. In WHOBERT, I knew right away that I wanted to play off of the alliterative name scheme that picture book writers are often told not to do because it has been done so much, and it tends to lend itself to a kind of innocence that some consider hokey. That's exactly the type of hokeyness that I wanted because this is a *fake* murder mystery, and I thought names like Freddie the Frog give a sense of playfulness to the plot as Whobert accuses more and more of his neighbors of dastardly deeds.

Q. How did you decide to tell the story in first or third person?
A. I thought third person served Whobert's story better because a narrator sort of gives Whobert a little credibility in his detective work. Whobert is a dunce detective, but he doesn't know it, and he really does want to do good in his community. I thought by having an omniscient narrator detailing his exploits, it would give this sort of subconscious recognition that at least somebody thinks Whobert's life is noteworthy even if he's not fully aware of his surroundings.

Q. How much of the story did you know when you began writing WHOBERT WHOVER, OWL DETECTIVE?
A. I knew that Whobert misinterpreted events by thinking normal animal behavior was a crime, and I knew how that would be revealed at the end. But when I sat down to write the story, I didn't originally know the characters Whobert would accuse of committing crimes in the forest. It was really fun to discover those characters and how they respond to Whobert's claims.

Q. Did WHOBERT WHOVER, OWL DETECTIVE receive any rejection letters? If so, how many (ballpark)?
A. WHOBERT did receive a few rejections, but I was really, really, really lucky in that I only went on one round of submissions. My awesome agent (Tricia Lawrence of Erin Murphy Literary Agency) subbed to five editors. One of those was Annie Nybo, who actually saw WHOBERT and critiqued it at an SCBWI conference. She gave me some fantastic notes, and told me that if I decided to revise the manuscript I should feel free to submit the manuscript to her. I revised per her suggestions, and here we are now!

Q. Describe your reaction when you received an offer on WHOBERT WHOVER, OWL DETECTIVE.
A. I. Could. Not. Stop. Dancing. Literally. I was in my bathrobe having just gotten out of the shower when Trish called to tell me the good news. I danced around my house in that robe for what felt like hours. I called my partner, I called my parents, I called my brother, I sent out vibes to Oprah in hopes that she'd pick up on them and name WHOBERT as an official book club selection, and the whole time I was dancing.

Q. What kind of input did you have in choosing an illustrator for the book?
A. I didn't have any input in selecting the illustrator for WHOBERT, and I'm so glad I didn't. Annie did such an amazing job of finding Jess Pauwels, and I could not be happier with the way our book looks. I was out at lunch with one of my closest friends (Bayne Gibby, who is also an author) when I got an email from Annie introducing me to Whobert, and I could not contain my excitement. While I was losing my head with joy, Bayne was present enough to snag a picture of the moment. I could not have a bigger smile. When I'm feeling the downs of the writer journey, I look at that picture to remind myself of how much fun writing for kids is, and that while there can be times that are frustrating, the good MAJORLY outweighs the bad.

Q. What jumped out at you when you saw the first sketches and jacket cover?
A. This is initially what went through my mind: "OH MY @%%#@ HE IS PERFECT LOOK AT WHOBERT CAN YOU BELIEVE THIS HOLY MOSES LORD AND TAYLOR AHAHAHAHAHAHAHAHAHAHAHAHAHA!"

After that, I could not stop looking at all the facial expressions Jess created. She does such an amazing job at conveying Whobert's concern, his suspicion directed at all of his neighbors, and all of said neighbors' annoyance at being confronted by this very pushy owl. The raised eyebrows, the squinted eyelids, the wide-eyed surprise are all so outrageous in the best way!

Q. How long did WHOBERT WHOVER, OWL DETECTIVE take to be published—from the time you received an offer until it was printed?
A. From offer to publication will be two years and four months. I think he was so worth the wait!

Q. What is your #1 tip to those who want to write picture books?
A. Get your work critiqued! All the time! I know it's scary to have others look at your work, but those suggestions you receive will make your work sing!

Q. Do you have a favorite writing exercise that you can share?
A. When you have a character in mind, find a list of questions typically asked in a job interview, and have that character answer them. You learn so much about your characters! A lot of what you write down won't make it into a manuscript, but you'll find little gems that are priceless and really help you get to the heart of your character's personality.

Q. What are you working on now?
I have a few picture book manuscripts on submission right now, as well as a middle grade fantasy-adventure that I really hope gets picked up because it's a world that I love! My current WIP is an #ownvoices YA manuscript about two gay teens getting to explore their relationship for the first time. It's been such an emotional process writing it, especially since my picture book writing tends to be humorous. Or at least I hope people find my PBs funny!

Thank you so much, Maria and Cindy! I hope you think Whobert is a hoot!

Jason, Whobert is adorable and I can't wait to read his story. Thank you Karlin for a great interview.

I'm excited for you! I'm excited for the illustrator! I'm thrilled for everybody who had a creative part in bringing all of us Whobert Whoever. I just can't wait to read it! :)

Congratulations, Jason! So excited to meet Whobert! Looks adorable! Wonderful interview ~ Thanks for the inspiration! Love your advice ~ "Get your work critiqued ... those suggestions you receive will make your work sing!" And I love writing from title ideas. Best wishes to you and Whobert!