ZEBRA ON THE GO 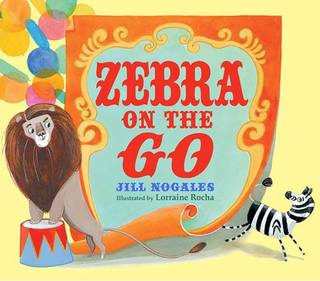 ZEBRA ON THE GO by Jill Nogales and illustrated by Lorraine Rocha (Peachtree Publishers, 2017)
Magazine writer Jill Nogales always rode the carousel's zebra when she was a child. But it wasn’t until she read about a circus animal escape that her zebra took off! Today she shares the story of her #firstpicturebook ZEBRA ON THE GO —“a beautiful tapestry of art, humor, and friendship” (School Library Journal) and “a solid read-aloud that is equally entertaining for both adults and children” (Kirkus Reviews, starred review)

Q. What inspired ZEBRA ON THE GO?
A. I read a brief article in the “Odds and Ends” section of the local newspaper about how a circus had come to town somewhere back east and one of the show animals had escaped during a performance causing a big ruckus in that town. That was it. No details. Which wasn’t at all fair because I wanted to know more! So I started imagining possible scenarios and that sparked the idea for ZEBRA ON THE GO.

Q. How did you pick the title of your book?
A. Honestly, I never gave the title much thought. It’s a phrase that is repeated throughout the story and it seemed like the right title from the very beginning.

Q. Do you write by hand or on the computer?
A. The computer is my preferred method of writing, but if I’m away from my desk and I get a really fabulous idea, I’ll write it by hand. Part of ZEBRA ON THE GO came to me in the middle of the night on a family camping trip. I didn’t want to wake up my kids, so I wrote it on a napkin with a crayon in the dark.

Q. What is your favorite part of the book? And was that part in the first draft? (Please send image of this page if you can.)
A. My favorite part of the book is where Zebra is hiding on the carousel pretending to be one of the horse figurines. It’s a fond childhood memory, I suppose. When I was young, my parents took me for rides on a carousel that had a zebra. My brother always chose one of the big fancy horses. But I rode on the zebra.

Q. Why did you decide to tell the story in third person?
A. First person didn’t seem right for this story because Zebra and Lion are focused on the chase and pretty much unaware of the chaotic ruckus they are causing as the story progresses. I wanted a broader perspective on the story events and third person let me do that.

Q. Why did you decide to write the story in rhyme? Did you write a version in prose?
A. ZEBRA ON THE GO is an action story. I felt that rhyme would make the story snap and keep the flow of energy going.

Q. How much of the story did you know when you began writing ZEBRA ON THE GO ?
A. When I began writing ZEBRA ON THE GO, I just had the first half in mind. Originally, the scene where Zebra is hiding on the carousel was the grand finale. But then a critique partner pointed out that Lion would not give up the chase so easily. Obviously, right? I kept writing and brought the story full-circle.

Q. Describe your reaction when you received an offer on ZEBRA ON THE GO.
A. Very excited! Dream come true!!

Q. How long did ZEBRA ON THE GO take to be published—from the time you received an offer until it was printed?
A. Almost 5 years

Q. Was there a part that you really loved but had to edit out? Or did you think of something later that you wanted to add?
A. Not one word was changed from the original manuscript -- for which I’m grateful because it could have messed up the rhyme and that would have been complicated to rewrite!

Q. What is your #1 tip to those who want to write picture books?
A. Embrace and enjoy the process. By “process,” I mean going to bookstores and libraries to analyze the newest picture books, joining a critique group and SCBWI, and of course actually writing. Luck sometimes plays a part, but writing a picture book is mostly a lot hard work. It’s tough to conjure one up overnight. It’s a process. So embrace and enjoy it!

Q. Do you have a favorite writing exercise or marketing tip that you can share?
A. Get to know the owners of nearby independent bookstores. These people know how to market books, they have connections, and most often they are happy to offer advice and guidance to debut authors.

Q. What are you working on now?
A. I’m still writing magazine stories as well as educational and religious materials. But I also have a few more picture book manuscripts in the works.

Thank you for this opportunity to share about my first picture book, Karlin, and best wishes to all of your readers!
Read More
1 Comments

This looks like such a fun tale! I've asked my library to acquire it ASAP. :)