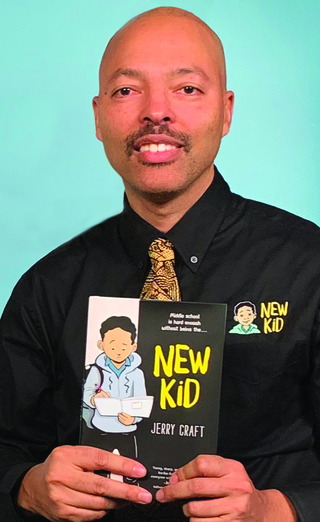 He is the creator of Mama's Boyz, a comic strip that was distributed by King Features Syndicate from 1995-2013, and won five African American Literary Awards. Jerry is a co-founder of the Schomburg's Annual Black Comic Book Festival. He was born in Harlem and grew up in nearby Washington Heights. He is a graduate of The Fieldston School and received his B.F.A. from the School of Visual Arts.

So what are Jerry’s 5 Favorites?:

Most of my drawing and writing is done in the studio in my home. But when it's nice out, I like to grab my laptop and sit in the gazebo that I put up in my backyard. Occasionally, I'll also go to the beach which is ten minutes from where I live.

As a kid, I wasn't a book reader, I mainly read Marvel Comics, so I really can't pull a book from my youth. But I think the graphic novels that inspired me most when developing New Kid were Smile by Raina Telgemeier, American Born Chinese by Gene Luen Yang, and Stitches by David Small.

The tip that changed the way I write is to "show it, don't tell it." For example, in New Kid, instead of saying that Jordan was nervous about meeting Drew for the first time, I had a scene where he was staring at Drew in class, and whenever he looked up, Jordan turned his head to avoid eye contact. Let the reader figure it out.

I almost always have a hat or shirt that has my most recent book on it. For New Kid I actually have caps, shirts and backpacks.

Wow, that's tough. Since New Kid came out in February, and even a few months before, my publisher (HarperCollins) has sent me to some really cool events all over the country. But I have to say that the one that is nearest and dearest to me is the one that I have done the longest which is the Hudson Children's Book Festival held on the first Saturday of May in Hudson, New York. I've also never missed the Chappaqua Children's Book Festival held every October. And I'm one of the co-founders of the Schomburg's Annual Black Comic Book Festival in Harlem in January.

As always, if you have read the author's work, consider writing a quick review using the links above.