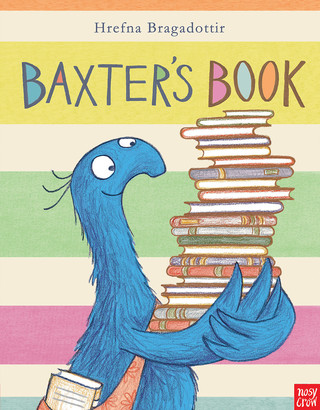 BAXTER'S BOOK by Hrefna Bragadottir (Nosy Crow, 2016)
Originally from Iceland, Hrefna Bragadottir has lived in the UK for the past 14 years and earned an M.A. in Children’s Book Illustration at Cambridge School of Arts. During her final year at Cambridge, she created a project that would turn into her #firstpicturebook, BAXTER'S BOOK—"the story of a peculiar blue birdlike creature who auditions to be in a book, but doesn’t conform to expectations. Simple words and comic pictures let us know that even the odd deserve attention" (The Sunday Times).

Q. What inspired BAXTER'S BOOK?
A. That's a very good question. I guess BAXTER'S BOOK was born out of my own insecurities as an aspiring writer/ illustrator. I was nearing the end of my masters degree and I still had no idea what to write about or what my 'voice' as an illustrator should be, yet alone how to get anything published! I remember a few of my tutors saying how important it is to write from the heart but I didn't really know what my heart had to say. I had been to a lecture about popular animals featured in picture books and I remember thinking 'What about the less conventional animals? Surely they deserve some attention, too! A few days later I did a doodle in my sketchbook of two unusual looking creatures having a conversation about how they would never make it into a book. And that's when the idea for BAXTER'S BOOK was born.

Q. How did you pick the title of your book?
A. When I first drew the character I decided to call him Nelson. I'm not sure why I picked that name, it just seemed to fit very nicely. The only problem with it was that the title didn't tell the reader what the book was about, and the publisher felt we needed to include the word 'book' in there. Nelson's Book didn’t sound quite right so I searched for lots of names beginning with B, and found Baxter!

Q. Do you write by hand or on the computer?
A. It's usually a bit of both. I start with a concept and make little doodles and notes on random pieces of paper. I tend to work much better on cheap paper that I can throw away as I find sketchbooks a bit intimidating, especially brand new ones! There's something about a pristine sketchbook that stops my creativity from flowing freely - I somehow become too concerned with getting it right first time. Once I've gathered lots of sketches and notes together, I then type anything about the character that comes to mind, and try not to worry too much about the content during the early stages of an idea.

Q. What is your favorite part of the book? And was that part in the first draft?
A. My favorite part of BAXTER'S BOOK is when he disappears behind the stage curtains and thinks to himself 'What if I'm not good enough to be in a book?' It pretty much sums up how I felt about embarking upon a new career at the time, but it's also something that children can relate to as they go through the process of discovering who they are. I guess that's what my tutors meant when they told me to write from the heart. It was always in the first draft but my editor very cleverly made it a double page spread to give that moment a bit more drama.

Q. How did you select the names for your characters?
A. I decided to name the other characters by their animal names Wolf, Lion, Bear and Rabbit, to keep them as generic popular picture book animals with lots of 'book acting' experience.

Q. Why did you decide to tell the story in first person?
A. I played around with telling it in third person, but it just didn’t feel as strong. I wanted Baxter to talk directly to the reader in the present moment to get a better sense of the journey he goes on. It keeps it short and sweet.

Q. How much of the story did you know when you began writing BAXTER'S BOOK?
A. That's an interesting question. I guess the idea was floating around in my head for a while and I had to brainstorm different scenarios before the ending got resolved. My housemate once told me it's so important to let ideas grow by nurturing them. She used to refer to it as putting them in a 'greenhouse' until they're strong enough to grow outside by themselves. I think so many great ideas get dismissed too early and it's such a shame. They need time and patience to flourish.

Q. Did you write the story first, then illustrate it? Or did the images appear before the words?
A. It was a mix of both. I drew Baxter once I had the concept idea for the book, but then the images evolved with the words, and vice versa.

Q. Did BAXTER'S BOOK receive any rejection letters? If so, how many (ballpark)?
A. Baxter's Book got picked up at our London graduation show, so I was fortunate enough to not have to go through that process.

Q. Describe your reaction when you received an offer on BAXTER'S BOOK.
A. I was absolutely over the moon, but also a bit overwhelmed as everything happened so quickly. I had several publishers interested in the book as a result of the show and an agent who wanted to represent me. It was very surreal to go from quite a lot of self doubt to suddenly having so much interest in my work.

Q. How long did BAXTER'S BOOK take to be published—from the time you received an offer until it was printed?
A. I received the offer in February 2014 and it got published in February 2016, so two years.

Q. Was there a part that you really loved but had to edit out? Or did you think of something later that you wanted to add?
A. Yes, I really loved the name Nelson, so it took a while to adjust to Baxter. But it's funny because I don’t even think about it now!

Q. What is your #1 tip to those who want to write picture books?
A. Patience and lots of perseverance. It's a very slow moving industry so if you get a book deal, don’t give up your day job until you have a few more projects on the go.

Q. Do you have a favorite writing exercise or marketing tip that you can share?
A. As I'm brainstorming story plots, I find it very helpful to consider how the characters are feeling, what they like or dislike and why? A lot of it will be unusable waffle, but it frees me up and stops me getting a writers block before the idea has had space to grow.

Q. What are you working on now?
A. I'm currently illustrating a text by another author, but I'm not sure how much I can say about it at this stage. It's being published next year…. I've also got an idea for another picture book, but it's still growing in the 'greenhouse' so isn't quite ready to face the world yet.