THE KRAKEN'S RULES FOR MAKING FRIENDS 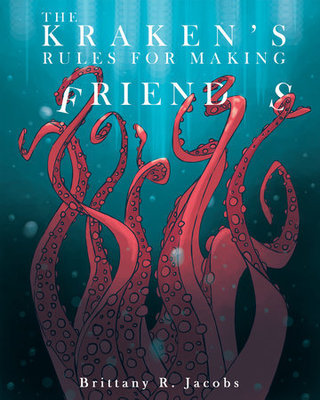 THE KRAKEN'S RULES FOR MAKING FRIENDS by Brittany R. Jacobs (POW!, 2016)
Brittany R. Jacobs writes and implements educational curriculum and is the illustrator of MIA LEE IS WHEELING THROUGH MIDDLE SCHOOL. But today, she is talking to us about writing and illustrating her first picture book THE KRAKEN'S RULES FOR MAKING FRIENDS—"a playfully illustrated, gratifying, and thoughtful look at what it takes to make friends" (thepicturebookreview.com).
Q. You have illustrated books before THE KRAKEN'S RULES FOR MAKING FRIENDS. How did you make the transition to writer/illustrator and how does it compare with being an illustrator of someone else's work?
A. Ironically enough, I started out as an author/illustrator, and was asked to do the illustrations for the Shang sisters' middle grade novel after I had already signed the contract and submitted the final artwork for the Kraken. The middle grade novel's production was so much faster than the Kraken and ended up in print before my book. So my transition was going from writing and illustrating to just illustrating. It was nice to have all of the editorial issued hammered out before I joined the team!

Q. Was THE KRAKEN'S RULES FOR MAKING FRIENDS the first picture book manuscript you ever wrote? If not, what was the first picture book you wrote and what happened to it?
A. Not even close! About 9 years ago I attended my first class on writing for children at the Loft Literary Center in Minneapolis, MN and subsequently wrote my first picture book manuscript (dummy actually because I did the illustrations too) entitled What's That Awful Smell?! Well, it turns out that the awful smell was that dummy! Of course I didn't know it then, but looking back it makes me cringe to see what I produced in the early stages of this career. I still have the manuscript, and all of the rejection letters that it accumulated, as well as the DOZENS of other manuscripts I have written/illustrated over the years. Before I got picked up by my agent I had accumulated a whopping 287 rejection letters with various dummies! I think one of the main reasons I stuck it out all these years is because I was naive enough to think that I was always around the corner from success!

Q. What inspired THE KRAKEN'S RULES FOR MAKING FRIENDS?
A. One cold February evening I received an email from Clelia Gore, asking me to join in on a call for a picture book dummy. Dozens of author/illustrators were contacted and we were given two weeks to create a picture book dummy with 3 final art spreads and a full manuscript about the Kraken. I immediately got to work, and - spoiler alert - I got the gig! I liked the idea of the Kraken trying to make friends, but inadvertently scaring everyone away because of his monster's stereotype and having another "monster" helping to bridge the gap.

Q. How did you pick the title of your book?
A. I didn't get to pick the title for this book. I had pushed for Here Comes The Kraken, but through the editorial process they came up with the current title. Now seeing the book from a bit of a distance (meaning I haven't worked on the kraken since January) I can see that they were right, and the title they chose is perfect!

Q. What is your favorite part of the book? And was that part in the first draft?
A. My favorite part is the very last spread/line, "Well, all but one." I love the idea that it only takes one person (or fish) to make a difference. It is one of the only things that remained from the original draft. Everything else (text and illustrations) went through round after round of edits.

Q. Why did you decide to tell the story in third person?
A. In the beginning I toyed around with telling the story from the Kraken's point of view, but I wanted to show why the fish don't like him. He's big and scary and has a terrible temper. Bringing the narration out to third person allowed for the reader to experience more of the characters.

Q. How much of the story did you know when you began writing THE KRAKEN'S RULES FOR MAKING FRIENDS?
A. I start out with pictures first, and then whatever the pictures don't convey I fill in the gaps with text. At the beginning I knew the start and the ending, but it took several drafts to figure out the 'rules' that drive the story.

Q. Did you write the story first, then illustrate it? Or did the images appear before the words?
A. Ha, got ahead of myself there! Well, like I said, I illustrate first and then go back and fill in the text. By "illustrate" I mean thumbnail on a small scale. In fact, if someone else looked at my initial sketches they would probably only see scribbles. These thumbnails are a point of reference for myself. Once the text is nailed down then I go back and flesh out the sketches to scale and then work on color.

Q. Did THE KRAKEN'S RULES FOR MAKING FRIENDS receive any rejection letters? If so, how many (ballpark)?
A. We had one heckuva time selling the Kraken, and it was because of the artwork. About 20 houses turned us down because they didn't love my illustration style. There was even a point where I considered selling the manuscript and letting someone else do the artwork. Thankfully Pow! saved the day and offered a contract for both text and illustrations, and we ended up with a lovely book.

Q. Describe your reaction when you received an offer on THE KRAKEN'S RULES FOR MAKING FRIENDS.
A. I cried. A lot! I was in the car and got a call from my agent, and I knew even before I answered that this was it. I kept myself together while on the phone with Clelia, but as soon as I hung up then the water works started! I had been trying to get published for 8 years and had heard, "Thanks, but no thanks" so many times that when I finally heard "Yes!" I just lost it.

Q. How long did THE KRAKEN'S RULES FOR MAKING FRIENDS take to be published—from the time you received an offer until it was printed?
A. I signed the contract in November of '15 and it hit shelves October '16, so a little less than one year. This is a very tight timeframe! Two weeks after the contract was signed 4 final art spreads were due, and the text and art all had to be turned in by early January.

Q. What is your #1 tip to those who want to write picture books?
A. Read, read READ! Get your hands on as many picture books as you can! You need to know what's out there, and what's selling in order to sell something yourself.

Q. Do you have a favorite writing exercise that you can share?
A. I LOVE poetry starters! They are simple, fast and wildly creative ways to keep the juices flowing.

Q. What are you working on now?
A. My agent and I are in the process of pitching a WILDly fun picture book, I have illustrations for another BEARy good picture book project out for review, and I just signed a contract to write a resource book for librarians on how to transform libraries into Adventure Learning Centers. Lots of fun projects!