THE BEAR AND THE PIANO

Tags: THE BEAR AND THE PIANO, David Litchfield, Clarion, 2016 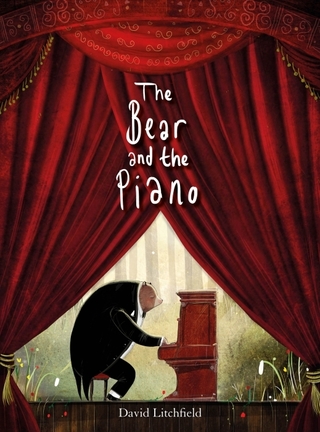 THE BEAR AND THE PIANO By David Litchfield (Clarion, 2016)
David Litchfield's illustrations have appeared in newspapers, magazines, and books. Starting in 2010, he did a drawing every day for a year and later hosted a Ted Talk about how that changed his life. Today he talks about how he created his first picture book THE BEAR AND THE PIANO—"one of those rare books that children can return to again and again through the years, each time finding new meaning appropriate to their varying ages and stages” (Kirkus Reviews).

Q. You had illustrated several book covers before THE BEAR AND THE PIANO. How did you make the transition to writer/illustrator?
A. Well actually, THE BEAR AND THE PIANO is my first ever book. I got the gig before any other commissions, which was strange as I had no experience of narrative illustration really. My editor Katie Cotton must have just seen the desire I had to create books and took a huge leap of faith in signing me up to do the book.

After I pitched the idea to Katie I drew the thumbnails and the rough version of the book as well as a few full colour spreads. This took me a couple of weeks working around other jobs in the evenings, etc. But thankfully, Katie was impressed enough by this to say yes and commission the book.

Since then, I have taken on a fair few projects for other authors. This is a very different process as you need to take on board the authors viewpoint for the world they have created.
Each way of working has their own enjoyable challenges and unique processes to follow.

Q. What inspired THE BEAR AND THE PIANO?
A. I think when you want to follow a certain dream you have to step out of your comfort zone. And also I think so many people are moving around and moving away these days that's it's sometimes important to remember your roots and where you come from. But obviously told in a very sweet, friendly way.

Q. How did you pick the title of your book?
A. I liked how it was a matter of factly style title. It describes what the main story points are and I think that's quite cool.

Q. What is your favorite part of the book? And was that part in the first draft?
A. I really like the giant theatre spread with the bear playing the grande piano in front of all of those people. This was one of the first images I sketched out and I could see it perfectly in my head. I'm really happy with how that spread turned out actually. From an illustration point of view I think it's a pretty good drawing (in my humble opinion). From a story point of view I think it's a good visual device of showing how far the bear has come and how different his life is compared to when he was playing on the tatty old piano in the forest.

Q. Why did you decide to tell the story in third person?
A. Ooh, I don't know actually. It just was a natural thing. I didn't really think about it at the time. But now that I am thinking, maybe it's because if I had have written it from the Bears perspective and have the bear narrate it would have broken the Magic a bit. After all, if the bear can talk and tell us the story, it's not to far to stretch our belief that the bear can play the piano. So maybe, sub consciously, that's why I wrote it in the third person.

Q. How much of the story did you know when you began writing THE BEAR AND THE PIANO?
A. All of it. actually, I sketched it out in my sketchbook before writing a word for it. Once I had the pictures mapped out it was quite easy to add the words. I think that's actually my favourite way of working.

Q. Did THE BEAR AND THE PIANO receive any rejection letters? If so, how many (ballpark)?
A. It didn't actually. It may sound like I'm showing off a bit, but my first ever pitch meeting with a publisher was with Katie at France's Lincoln which went great and she loved the idea and the book got signed up. So, yep, no rejections (feel slightly smug now).

Q. Describe your reaction when you received an offer on THE BEAR AND THE PIANO.
A. I remember I left France's Lincoln offices and went to Starbucks and had a sausage sandwich. I rang my wife and told her the good news and then emailed my agent. I then floated on a cloud of joy home from London to Bedford. It was a bloody brilliant day.

Q. How long did THE BEAR AND THE PIANO take to be published—from the time you received an offer until it was printed?
A. It was a fairly quick process. Pretty much 1 year exactly. I got the green light on the project from France's Lincoln in September 2014 and then it was published in September 2015.

Q. Is there anything you would change in the book today if you could reprint it? (Was there a part that you really loved but had to edit out? Or did you think of something later that you wanted to add?)
A. There was an extra spread which had the Bear running through the city streets just before he heads back to the forest. But part of the process of working with Katie was looking at what worked for the story and what might slow it down. This was a fantastic learning curve and even though I loved the look of the city spread I could see that it just wasn't needed at all. But to be honest I really don't think I would change anything within the book. I'm really rather fond of It :)

Q. Can you share any funny or memorable parts of letters from kids about THE BEAR AND THE PIANO?
A. I've had some great letters from kids who have read the book. I love getting letters. A couple of weeks ago I even got given a book drawn by a 7 year old girl called 'the bear & the Trumpet' which was inspired by my book. I'm even a character in the book which is amazing.
I still can't get over the fact that the book I drew in my cramped little spare room in our old flat is now being read by children all across the world. It's amazing really.

Q. When you do readings of THE BEAR AND THE PIANO, which part of the book gets the best reaction?
A. The big reveal at the end when the bear returns home is always nice. In fact I did a reading at a primary school last month and the teacher started crying at that point. It was a bit awkward. But also lovely and funny.

Q. What is your #1 tip to those who want to write picture books?
A. Being passionate about what you do, and having a strong portfolio is helpful (if you want to illustrate too).

But what I have learnt is that a good idea and a good concept can impress anyone. I think that publishers like to work closely with authors and illustrators in developing an idea. So the fact that The Bear & the Piano was just a very loose idea—literally just a paragraph synopsis and a few sketches—when I pitched it, was actually something that worked in its favour.

To learn more about how David created THE BEAR AND THE PIANO, visit his blog.