THE SUMMER NICK TAUGHT HIS CATS TO READ 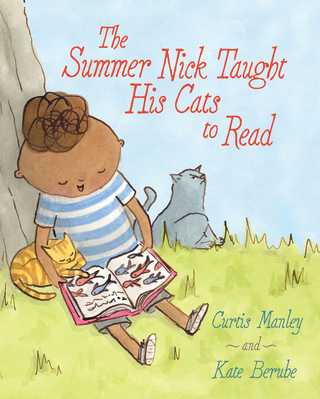 Q. What inspired THE SUMMER NICK TAUGHT HIS CATS TO READ?
A. When I started working on the story in early 2009, I was remembering when my daughter began reading middle-grade novels. She sank so deep into those books that she was in another world—and it was not the world in which her mother and I were asking her to get ready for dinner! So that’s what the first version of the story was about—a boy whose best friend (his cat) gets lost in books. Gradually the story changed so that the boy teaches the cat to read. And then two cats were being taught, but reading didn’t come equally easily to both...

Q. How did you pick the title of your book?
A. The earliest versions of the title were always similar to the final title. It seemed a good idea to use the title to make it clear what the book was about (at least on one level). It also seemed like a title that would make people think “What? Can cats really be taught to read?” Of course, some people might worry, wondering if their cats have been reading all along, unbeknownst to them…

Q. What is your favorite part of the book? And was that part in the first draft?
A. I really like many different parts of the book, but the spread with all the drawings is one favorite. Was that in the first draft? Nope! It first appeared in the draft that got the offer—but in fact previous drafts had hinted at something under the bed (but even I—the author—had missed those hints).

Q. How did you select the names for your characters?
A. I chose “Nick” because I thought that name would work well for any boy the illustrator might draw. For the cats, I didn’t want “cute” names; I wanted distinctive names that adults would recognize from some of the classic books referenced in the story. “Verne” seemed fitting, and “Stevenson” was actually a perfect match for a cat who’s a reluctant reader…

Q. Why did you decide to tell the story in third person?
A. The first four years of my working on it, the story was in first person. I felt that made it more immediate. But first person isn’t always the best choice for a read-aloud. My editor asked me to try it in third person; that allowed the humor to come out more, so we kept it that way.

Q. How much of the story did you know when you began writing THE SUMMER NICK TAUGHT HIS CATS TO READ?
A. I think I had a good idea of the whole story—but, as I mentioned above, the story changed so that isn’t the one you’ll read in the published book.

Q. Did THE SUMMER NICK TAUGHT HIS CATS TO READ receive any rejection letters? If so, how many (ballpark)?
A. Many of my manuscripts have received several rejections. Several have received many rejections. But for this book, my agent’s choice of the first editor to send it to was perfect: that editor liked it right away. Not that the editor immediately yelled, “Sold!”—there were extensive revisions before that happened.

Q. Describe your reaction when you received an offer on THE SUMMER NICK TAUGHT HIS CATS TO READ.
A. Relief! After three rounds of revisions, one right after another, I was just glad the story had sold so that we could be finished with all those rewrites. Famous last words! Immediately after the offer there were two more rounds of revisions—and two additional rounds several months later! It was some of the hardest writing I’ve ever had to do.

Q. What kind of input did you have in choosing an illustrator for the book?
A. It’s unusual for the writer to have much say in the matter. But I’m grateful I was shown the samples and sketches as the work progressed.

Q. What jumped out at you when you saw the first sketches and jacket cover?
A. My editor needed to be sure that any illustrator chosen had good cat-drawing abilities, so she asked the illustrator she had in mind—Kate Berube—for some samples. Kate’s sample cats had just the right dynamic and charm for the story—and behaved like the cats we ourselves have had over the years.

Q. How long did THE SUMMER NICK TAUGHT HIS CATS TO READ take to be published—from the time you received an offer until it was printed?
A. It took just a bit more than two years. That’s pretty common with picture books for which the author is not creating the illustrations.

Q. When you do readings of THE SUMMER NICK TAUGHT HIS CATS TO READ, which part of the book gets the best reaction?
A. Kids like to recite the words that are spelled out on the flash cards that Nick uses. They also love to meow and hiss along with the cats!

Q. What is your #1 tip to those who want to write picture books?
A. If you’re serious about writing for children, join SCBWI. But even more important than that is to find a critique group of like-minded children’s writers (which SCBWI can certainly help with) who can give you a wide range of feedback on your manuscripts and story ideas. A good writing group can help its members bootstrap themselves from being writers to being published authors. It’s happened for many of the folks in my group.

Q. Do you have a favorite writing exercise that you can share?
A. I’m not sure I’d call it an exercise, but (no matter where I might be) I try to always write down any story idea I have—because if I don’t, I’ll likely forget it. If I forget it, I can never work on it and turn it into something—and there’s no guarantee I’ll ever recall it again. On my computer I keep a file with all my ideas, and I look them over every so often. I never know when I’ll think of the perfect detail or situation to turn a specific idea into the core of a future book.

Q. What are you working on now?
A. I just sold my first nonfiction picture book manuscript, but I’ll likely be working closely with the editor for several months to get the text “just right”. And I try to have four or five new manuscripts that I’m working on—or at least thinking about—at any given time.

Thanks so much, Karlin, for inviting me to appear on your blog!