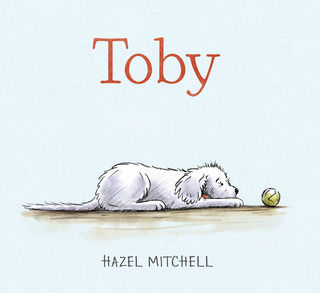 TOBY by Hazel Mitchell (Candlewick, 2016) TOBY. Copyright © 2016 by Hazel Mitchell. Reproduced by permission of the publisher, Candlewick Press, Somerville, MA.
Originally from England, where she attended art-college and served in the Royal Navy, Hazel Mitchell now lives and works in Maine. She has illustrated many books for children including Imani’s Moon, One Word Pearl, Animally, and Where Do Fairies Go When It Snows? But today, she is talking about her author-illustrator debut, TOBY. "This familiar story with a family cast not often seen in picture books will warm dog-loving hearts.—School Library Journal

Q. You illustrated several books before TOBY. How did you make the transition to writer/illustrator and how does it compare with being an illustrator of someone else's work?
A. That's a good question. I have always written, but I've always been an artist first, even at school. It's what I was best at. But throughout my life I've always tinkered with story ideas. Finishing them was the big problem! It's easy to start, right? I think we all have a mountain of unfinished projects in drawers or under the mattress. So, I went to art college, art became my career (I worked as a graphic designer until I came to America in 2000). When I began to finally think seriously about trying to get work in the children's trade book industry, it was natural that I'd showcase my artwork first and that's how I got my first books to illustrate. But I was still working on stories. It was a great learning curve illustrating first and I enjoy collaborating very much with authors. But I still wanted to write my own books! And I wanted an agent and I wanted one who would represent my writing too. So I figured I'd better start finishing my story ideas. I'd been rejected by agents in the past (part of the course), but when I started to write about Toby finishing the first draft/dummy happened in 4 weeks. And strangely enough, my agent, Ginger Knowlton of Curtis Brown Ltd., signed me 4 weeks after that! This is my first book as author and illustrator. It's different in several ways from being illustrator only. When you receive a manuscript to illustrate, the idea is all ready conceived, you are working with someone else's idea. When it's your story, you are working on both sides of the fence at once. When I'm illustrating someone else's book I am always conscious of their words, hoping they will like the finished product and that I will do them justice. When I was illustrating my own book I felt like I had a split personality in some ways. I am looking forward to working on more of my own stories, but I also want to work on other manuscripts too ... because it's a wonderment drawing things you would never have conceived yourself.

Q. What inspired TOBY?
A. Toby, my poodle! I adopted him from Houlton Humane Animal Shelter, Aroostook, Maine in fall 2013. I posted a lot about him on social media and his development as a very fearful dog. People really loved him. It was actually Harold Underdown who suggested I write a book about him. And the rest, as they say, is history.

Q. How did you pick the title of your book?
A. It was always 'TOBY'. My editor (Liz Bicknell) and art director (Ann Stott) at Candlewick threw some other ideas on the table, but 'TOBY' was the final choice.

Q. What is your favorite part of the book? And was that part in the first draft?
A. I have a lot of favorite parts, because although Toby is adopted in the book by a fictionalized character, much of what happens is from real stuff that happened with Toby. I think my fav scene is the part where the boy, who is Toby's new owner, comes downstairs when Toby's howling, gives him a toy rabbit and sleeps next to Toby to sooth him, (my husband did that the first few nights Toby was with us). And yes it was in the first draft (and we had about 5 drafts!).

Q. How did you select the names for your characters?
A. This is easy - I only have one named character! The boy and the Dad in the story are unnamed. Although Dad calls the boy 'Bud' affectionately. I don't know if that is his real name. My husband calls his son 'Bud' occasionally.

Q. How did you decide between telling the story in first person or third person?
A. Originally I wanted it to be almost wordless. But as I worked on the story with my editor and art director, we felt more words were needed. So it's mostly conversational in graphic panels, with some short lines in first person to lead the reader from one scene to another. It's good for the parent to have something to read aloud and not just to look at the pictures and also gives the child something to linger over.

Q. How much of the story did you know when you began writing TOBY?
A. Hmm. A fair bit. I knew that it was about my dog in a fictionalized setting. (Writing about me would have been boring ... and the child is someone the reader can identify with). But I didn't know the ending. Well I did, but I didn't know how I would get to it. And a LOT changed in revisions!

Q. Did you write the story first, then illustrate it? Or did the images appear before the words?
A. I started this process doing lots of scenes about Toby that I sketched and then linked together. There where very few words. As the story grew in revision more words were added, and taken away, and added. It was an interesting process and very different from how I imagined it worked in the beginning of my career... write a manuscript - draw the pictures. It's a BOOK!

Q. Did TOBY receive any rejection letters? If so, how many (ballpark)?
A. Easy again ... NONE. My agent signed me on the strength of Toby and Elizabeth Bicknell at Candlewick bought it. (But if you want to see my big pile of rejection letters from all my other projects, I can count them).

Q. Describe your reaction when you received an offer on TOBY.
A.*&^#%#^%^^!%^()))!)**#&^#^%^ SQUEEEEEEEEEEEEEEEEEEEEEEEEEEEEEEEEEE!!
But I also need to add to this that while the manuscript was being considered at Candlewick, the real Toby went missing! He was gone for eight days (and he had never even really been out of our garden!). There was huge search for him locally, people were holding their breath on social media and checking in to see if he had been found. At that time no one even knew the book was on submission! Luckily Toby found his way back ... if he hadn't I didn't know if I could have done the book. Talk about high drama ...

Q. How long did TOBY take to be published—from the time you received an offer until it was printed?
A. The offer was made Labor Day 2014 and publication day is Sept 13th 2016. So almost exactly 2 years!

Q. Is there anything you would change in the book today? (Was there a part that you really loved but had to edit out? Or did you think of something later that you wanted to add?)
A. That's hard. There are always things you want to change. Images you wish you could do over ... I don't think there is anything I want to add. We did edit out one scene though, where Toby licks the boy's hand when he is sleeping. Toby did that to me the first week he was with us. He wouldn't touch us when we were awake. But it wasn't moving the story forward in the book. Kill your darlings!

Q. What is your #1 tip for writing picture books?
A. Write what's in your heart.

Watch TOBY's book trailer.
To learn more about Hazel and all her books, visit her at her website.

A winner has been selected and the contest is now closed. Thanks for participating! To celebrate TOBY's publication, Hazel is giving away a copy of TOBY. Simply comment below to enter. One comment per person, US addresses only, please.

I've been waiting for this one! Congrats, Hazel! TOBY looks adorable :)

Thanks so much, Lori!

I love that Toby is a rescue pup, with unknown history. My Sparky (Jan 2005 - Mar 2016), and now, my Bunji (May 2016) both rescued me from our local pound. Each had their own baggage, as did I. I love the way the story goes gently, showing patience, love and understanding and the bonds formed as a result. We are all works in progress, and Hazel has illustrated that beautifully, in both her illustrations and words.

Dear Terisa and Bunji ... thank you so much ... and yes, we have to work with each animals own issues! Patience abounds on all sides. Hazel and Toby xx

Loving the blog tour, spreading the word about this wonderful book!

That must have been so scary to have Toby missing! So glad you got him back! Looking forward to reading this. I love the cover :)!

My rescue mutt, Becca is from TN and she was so submissive when we first got her. 10 years later, she is a dog sister to our only child and such an important member of the family.

A winner has been selected and the contest is now closed. Thanks for participating!