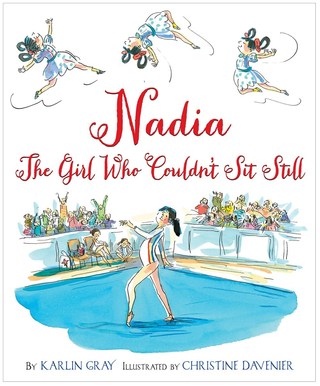 Thank you to all the writers who have participated in this blog. I love learning about how someone travels from a moment of inspiration to a finished piece of work! I hope this blog is useful to other picture-book writers and encourages them to write on!

Q. What inspired NADIA?
A. My writing instructor was reviewing some nonfiction picture books and I couldn't remember reading a nonfiction picture book when I was a kid. I thought back to my six-year-old self and wondered, who would I have wanted to see in a picture book? The first name that popped into my head was Nadia Comaneci. I loved gymnastics and would have clutched a book like that close to my heart.

Q. What kind of resources did you use while researching NADIA?
A. Everything I could find: Olympic coverage, interviews with Ms. Comaneci, newspaper and magazine articles, and books—Nadia Comaneci's two autobiographies along with Bela Karolyi's autobiography were essential! The official websites of Nadia Comaneci and Bart Conner, the International Gymnastics Hall of Fame, and the Olympic Studies Center were also key resources.
Some of these can be found on my Pinterest page along with some videos of Comaneci and my messy first page draft.

Q. How did you pick the title of your book?
A. At first, I wanted the word "hope" to be in the title because Nadia's name means "hope" and she was an Olympic-hopeful-turned-champion. But I didn't come up with anything that I liked. In reading Nadia Comaneci's autobiography Letters to a Young Gymnast (Basic Books), I learned that she was a rambunctious toddler who had tons of energy. She wrote, “If I wasn’t playing soccer or climbing trees, then I was doing cartwheels. The freedom of movement was intoxicating, and I could never stand still.” While I was writing my book, I also had a three-year old who loved to fling himself from couch to couch. (And honestly, he still does.) Constant movement was a theme on the page and in my own living room. The two collided and created NADIA: THE GIRL WHO COULDN'T SIT STILL.

Q. What is your favorite part of the book? And was that part in the first draft?
A. My favorite part of the text: "Soon, Nadia was flying from bar to bar, from floor to vault, and high above the beam." This wasn't in my first draft. My first draft: "Nadia practiced and practiced and practiced even more until she performed her routines perfectly." Bleh, boring! Around the second or third draft, I focused on "show don't tell" and brought in the image of flying. It was also a good way to cover the four areas of women's gymnastics in one sentence. At a school reading, the librarian asked what the kids liked about the book and one boy recited that very line. I almost cried.

For several reasons, my favorite illustration is Nadia flipping on the beam. First, I have a distinct childhood memory of staring up at the TV and watching in awe as Comaneci danced, flew, and flipped on a four-inch beam. Second, this illustration is based on a famous Olympic photo where the photographer shows several frames within one combination of moves. Finally, the illustration is such a great foil to the previous beam illustration where she falls off in her first competition. Thank you Christine Davenier!

Q. How did you select the time frame for NADIA?
A. For me, the heart of the story is how a "flaw" fueled the way to excellence. So I started the story when Nadia was a four-year-old bouncing off the walls and getting into trouble and ended it when she was 14 and made Olympic history. I love how illustrator Christine Davenier used the same idea for the first and last page but also showed Nadia's transformation.

Q. Did NADIA receive any rejection letters? If so, how many (ballpark)?
A. Oh yes, it was rejected by several publishers and agents. I remember one agent said that although she was passing on the book, she could see that I wrote nonfiction very well. That was such an encouraging rejection! I continued to receive rejection letters after my offer. Happily, I tossed those in the trash.

Q. Describe your reaction when you received an offer on NADIA.
A. One day I received an email with NADIA in the subject line. I assumed it was another rejection letter. Instead, it was an HMH editor saying she would do triple back flips if I'd accept her offer. I jumped up and down and called my husband and parents. Neither answered. I couldn't tell anyone until I told them so I kept texting my husband, "Good news, good news," until he responded. He came home, grilled steaks, and opened a bottle of champagne.

Q. What kind of input did you have in choosing an illustrator for the book?
A. My editor Kate O'Sullivan was kind enough to ask me for suggestions although I knew I didn't have a say in the matter. She was so excited when Christine Davenier accepted and I trusted her completely. I can't imagine anyone else illustrating NADIA.

Q. What jumped out at you when you saw the first sketches and jacket cover?
A. Christine Davenier's artwork reminded me of "swimming through an ocean of air"—words used by sportscaster Jim McKay when he described Comaneci at the '76 Olympics.

Q. How long did NADIA take to be published—from the time you received an offer until it was printed?
A. Three years. My editor told me in the offer letter that she wanted to publish it in time for the 2016 Summer Olympics.

Q. Is there anything you would change in the book today if you could reprint it? (Was there a part that you really loved but had to edit out? Or did you think of something later that you wanted to add?)
A. I love to cut text that doesn't move the story forward so I don't miss anything that was edited out. (For example, my first draft had a sentence or two describing Nadia's mother as a homemaker and her father as a mechanic. Those descriptions were not essential to the overall story so I took them out.) I do regret that I wasn't able to get an interview with Ms. Comaneci. I think having a Q&A in the back matter would have added another layer of meaning. I should have tried harder but I wanted to respect her privacy.

Q. Can you share any funny or memorable parts of letters from kids about NADIA?
A. After my first school visit, I received a package of letters from the kids. They were all so sweet and encouraging. One wrote, "This book was amazing. We think you should keep up the good work because we want to read more, thanks." I might wallpaper my office with it.

Q. When you do readings of NADIA, which part of the book gets the best reaction?
A. When Nadia receives the score of a 1.00, the kids get fired up: "What?! That's not fair!" It's the same reaction the crowd had that day in Montreal. The kids settle down once they learn it was really a 10.

Q. What is your #1 tip to those of us who want to write picture books?
A. I think all the doors in my head burst open when one of my writing instructors said: "Write your first draft fast and don't stop to correct anything. Just get it all out. It might terrible and that's ok because no one else will see it but you." Then go back, again and again, and revise. Characters, dialogue, plot points, and themes will emerge. And guess what—if you end up hating it, you toss it in a drawer. No big deal.

Q. What else are you working on?
A. I'm always working on nonfiction and fiction picture books. On my desk, there is a box of working manuscripts with stories about presidents, magicians, explorers, athletes, mermaids, monsters, scarecrows, cats, mice, and one sad moth. I hope they behave when I turn off the lights.

Come visit me this summer at these book events.

Congrats,Karlin, and very happy book birthday to NADIA!! So looking forward to reading it!