THE SOUND OF SILENCE 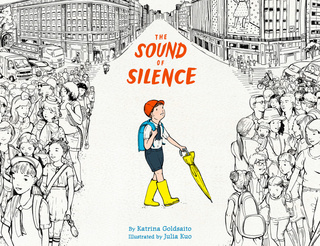 THE SOUND OF SILENCE by Katrina Goldsaito and illustrated by Julia Kuo (Little, Brown, 2016)
Katrina Goldsaito worked as TV journalist and producer in Tokyo and is currently writing a YA novel. But today she tells us how she created her first picture book, THE SOUND OF SILENCE—"An inviting tale that will stretch inquisitive and observant young minds—and may even lead children to a greater appreciation of that golden commodity, silence" (Kirkus Reviews).

Q. Was THE SOUND OF SILENCE the first picture book manuscript you ever wrote? If not, what was the first picture book you wrote and what happened to it?)
A. THE SOUND OF SILENCE was somewhere in a pile of ten manuscripts that my partner and I decided to write in ten days. Every night after my epic days as a TV Journalist in Tokyo for NHK-World, I’d come home and write a picture book. We’d sit on the floor and I’d write a page and hand it to him to illustrate. Every day for ten days. A very early (and nearly unrecognizable) draft came out during that creative sprint.

Q. What inspired THE SOUND OF SILENCE?
A. The story is one my father told us growing up—of a musician who was also my dad’s neighbor (and who I later found out was the famous contemporary composer Toru Takemitsu) told my father that his favorite sound was the sound of silence.

Q. How did you pick the title of your book?
A. It was such a long process! There were emails! And committees! And brainstorms! And I still am not sure about it—mostly because when you google it you get Simon and Garfunkel. (Who I love).

Q. What is your favorite part of the book? And was that part in the first draft?
A. That’s such a wonderful question, because I love the end, and your follow-up question is making me realize that the ending is the heart of the story. The heart was there in some form even in the earliest drafts. Rewriting was all about revealing the heart, all about making sure that every piece of the story is beating along with it—but it was there all along (just like the silence that little Yoshio finds!)

Also, I love Julia’s aerials in the spread with the family eating and Yoshio taking a bath, gorgeous. (And the bamboo grove. And the end. And EVERYTHING. Juliaaaaaa!!!!)

Q. How did you select the names for your characters?
A. Yoshio is my dad’s name, and your question is making me realize that no one else has names in the book!!

Q. Why did you decide to tell the story in third person?
A. Hmm, I never thought about telling it in anything but third. (Just as the novel I’m working on can’t seem to be in anything but first). I think it’s about how it appears in my imagination—the voice is clear to me from the beginning.

Q. How much of the story did you know when you began writing THE SOUND OF SILENCE?
A. Originally the story had a few focuses—one of which was that the boy was always late to school (That got completely jettisoned, thank goodness), the other was that he was connecting with different traditional artisans, which was focused into the one character of the koto player. Bethany Strout was the genius behind making her a woman—one of my favorite changes that came with art.

Q. Did THE SOUND OF SILENCE receive any rejection letters? If so, how many (ballpark)?
A. It didn’t. Though I did work with Alvina Ling at Little, Brown for almost a year before it went to acquisitions. I learned everything in that year, it was such an incredible gift, that mentorship.

Q. Describe your reaction when you received an offer on THE SOUND OF SILENCE.
A. Tears. :)

Q. What kind of input did you have in choosing an illustrator for the book?
A. A lot! I was very lucky that this was such a collaborative process and the editorial team was so respectful and interested in my thoughts on illustrators. We had such a similar vision for the book, and we all knew that Julia was and is the perfect artist to create Yoshio’s illustrated world.

Q. What jumped out at you when you saw the first sketches and jacket cover?
A. Those last pages. Ohhh, I love them so much. In those last pages when he finds silence I feel like Julia and I are so perfectly in sync. I still get a little teary when I read them.

Q. How long did THE SOUND OF SILENCE take to be published—from the time you received an offer until it was printed?
A. 5 years! 6 if you count the year before it sold. I loved that it took so long. I loved working on other projects and knowing it was in the wings waiting, and telling people about it and preparing for it to show up in the world. I wouldn’t have sped it up at all.

Q. Is there anything you would change in the book today if you could reprint it? (Was there a part that you really loved but had to edit out? Or did you think of something later that you wanted to add?)
A. Not a single thing.

Q. Do you have a favorite writing exercise that you can share?
A. That ten books in ten days exercise was amazing. Just committing to creating no matter what happened: no matter if we were tired or bored or feeling insecure, that we would make no matter what.

Q. What are you working on now?
A. I'm performing at the Luggage Store Gallery in San Francisco (Om I'm Home) where I'm pouring tea for visitors in my own version of a Japanese tea ceremony. We continue to make WeDokiDoki. A new picture book is with my editor, my first YA novel, Otemba is nearly ready for submission; and I am always lovingly dipping into a memoir project called The Last Speaker of a Secret Language.