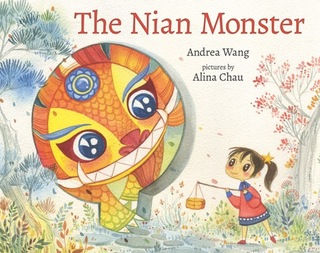 THE NIAN MONSTER by Andrea Wang and illustrated by Alina Chau (Albert Whitman, 2016)
A former environmental consultant, Andrea Wang has written several nonfiction books but when she came across an old folktale, the idea for her #firstpicturebook was born. Today she shares the story behind THE NIAN MONSTER—a "fun-filled holiday adventure" (Foreword Reviews) that "thrills but doesn’t threaten" (Publishers Weekly, starred review).

Q. What inspired THE NIAN MONSTER?
A. I came across the old folktale about the Nian monster and was intrigued because I’d never heard it when I was a child. I like stories about monsters and I especially like trickster tales, so I thought I’d try to write a retelling in a contemporary setting.

Q. How did you pick the title of your book?
A. I’d initially titled it The Return of the Nian Monster, but since very few people were familiar with the original folktale, it didn’t feel quite right. Shortening it to just The Nian Monster seemed like a good way to introduce readers to him.

Q. What is your favorite part of the book? And was that part in the first draft?
A. [Spoiler Alert!] My favorite part is when the Nian monster’s jaws get stuck together with sticky rice cake. It wasn’t in the first draft or the second, but when I finally hit upon using traditional Chinese New Year foods to defeat Nian, that scene appeared right away.

Q. How did you select the names for your characters?
A. The Nian monster was already named, so that was a given. I chose Xingling’s name based on what it means – “born with a clever nature.”

Q. Why did you decide to tell the story in third person?
A. I think using third person retained the sort of timeless, folktale quality of the story.

Q. How much of the story did you know when you began writing THE NIAN MONSTER?
A. I stayed close to the structure of the original folktale, where the monster is defeated by a person who figures out his three weaknesses. I knew I wanted the protagonist to be a smart and brave girl, and that the tricks used on Nian in the folktale wouldn’t work on him anymore. Everything else I figured out through many revisions.

Q. Describe your reaction when you received an offer on THE NIAN MONSTER.
A. I couldn’t quite believe what was happening. To be honest, I had forgotten that I had submitted the manuscript to Albert Whitman because it had been so long (nearly 18 months). And to suddenly be plucked out of the slush pile felt unreal.

Q. What kind of input did you have in choosing an illustrator for the book?
A. My editor, Kristin Zelazko, was very kind about receiving my suggestions for illustrators and passing them along to the art director. They didn’t end up choosing anyone I had suggested, but I really could not be happier that they selected Alina Chau. I didn’t think that as a debut author I would be so lucky as to have someone of her caliber illustrate my book.

Q. What jumped out at you when you saw the first sketches and jacket cover?
A. I was blown away by the colors and the culturally-accurate details. Alina made the story come alive!

Q. How long did THE NIAN MONSTER take to be published—from the time you received an offer until it was printed?
A. I received the offer in February 2015 and the book was released on December 1, 2016, so it was just a couple months shy of two years from start to finish. It sounds like a long time, but the months just flew by!

Q. Is there anything you would change in the book today if you could reprint it? (Was there a part that you really loved but had to edit out? Or did you think of something later that you wanted to add?)
A. I didn’t have to edit much of the original manuscript that I submitted, which was great. All my “darlings” stayed in the story. There’s one line, though, that I think I’d change now that I’ve read it out loud so many times: “Nian’s wide, wicked jaws were stuck fast.” I keep stumbling over the “stuck fast” part. I think I’d either leave out the word “fast” or replace it with “together.”

Q. Can you share any funny or memorable parts of letters from kids about THE NIAN MONSTER?
A. I haven’t received any letters from kids yet, but at one storytime event, a girl said she thought Nian was cute and cuddly. But after I read the part about Nian eating entire villages, she announced that he was mean and she didn’t like him anymore! (I wouldn’t like having a monster threaten to eat me, either.) Another child told me that she would defeat the monster with chocolate cake, which sounds like a great idea to me. Especially if it’s a flourless chocolate cake – those things are deadly! :)

Q. When you do readings of THE NIAN MONSTER, which part of the book gets the best reaction?
A. I do an interactive storytime which was created by Kirsten Cappy of Curious City DPW (www.curiouscitydpw.com). I have a giant Nian monster mask and the kids can come up and “feed” him the food items mentioned in the book. There are fireworks at the end of the story and each child gets a paper bag to fill with air and pop. They all love making noise and helping me send away the Nian monster!

Q. What is your #1 tip to those who want to write picture books?
A. Persist! Keep reading, studying, writing, revising, and submitting.

Q. Do you have a favorite writing exercise that you can share?
A. One of my new favorite exercises is by Jean Reidy, a friend and agency-mate. She has “10 Power Premise Questions” on her blog here (http://jeanreidy.com/2013/09/does-your-picture-book-premise-have-power/) that help you figure out if your picture book idea has what it takes to sell. I find it to be a handy, quick, but not necessarily painless way to sort through my ideas and decide which one to work on next. It’s especially helpful if you participate in Storystorm (formerly known as Picture Book Idea Month) and don’t know which idea to work on first!

Q. What are you working on now?
A. I’m working on a middle grade coming-of-age novel about a young Chinese girl who moves from Boston’s Chinatown to rural Ohio. I tend to keep my WIPs close to my chest, so that’s all I’m ready to say about it now.

Thanks so much for interviewing me and I hope to see you and your readers around online!
Read More
2 Comments

Thank you so much for hosting me on your blog, Karlin!

LOVE The Nian Monster!!! Thanks for the great interview, Karlin :)!!