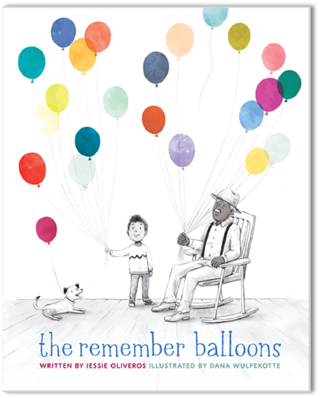 THE REMEMBER BALLOONS By Jessie Oliveros and illustrated by Dana Wulfekotte (Simon & Schuster, 2018)

Jessie Oliveros had a four-day-old baby when she received the news that her #firstpicturebook would be published. It’s been 2 1/2 years since then and today she talks to us about THE REMEMBER BALLOONS—“A moving and meaningful way to talk about a situation many families will face" (Kirkus Reviews, starred review).

Q. What inspired THE REMEMBER BALLOONS?
A. I was inspired to write THE REMEMBER BALLOONS after visiting my grandfather a few years ago. He suffers from Alzheimer's, and as my kids and I were sitting with him, I thought I'd write a picture book about a grandfather like mine. At first it was a straight-forward story about a boy and his grandfather with Alzheimer's, but then it morphed into a metaphorical story with memory balloons. I'd been recording my grandparents' histories on a voice recorder. Perhaps that had something to do with the turn my manuscript took--the voice recorder made the memories a solid, tangible thing I could put in my pocket.

Q. How did you pick the title of your book?
A. Honestly, it was a bit of a working title, something to save my file under. I was surprised (and pleased) that the publisher liked the title enough to stick with it!

Q. Do you write by hand or on the computer?
A. It depends on the manuscript. I recently finished a picture book that I drafted entirely by hand. However, I drafted THE REMEMBER BALLOONS on the computer. I suppose it depends on how quickly the ideas are flowing. Writing by hand suits slow, percolating ideas.

Q. What is your favorite part of the book? And was that part in the first draft?
A. I love this three frame scene of James chasing after Grandpa's balloons. Dana is an animator as well as an illustrator, and you can really see that in this spread. There is so much movement! It really suits the text.

Q. What made you decide to tell the story in first person?
A. That is a question I've never asked myself! Most of my picture book manuscripts are in third. I suppose the only answer is that is how the story came to me.

Q. How much of the story did you know when you began writing THE REMEMBER BALLOONS?
A. I didn't actually *know* any of the story. But once the idea of memory balloons came to me, it all kind of flowed freely from there. I had a beginning, middle, and end in the afternoon. I can't say that about all my manuscripts. The ending is usually the most difficult part for me.

Q. Describe your reaction when you received an offer on THE REMEMBER BALLOONS.
A. Well, I was tired and sleep-deprived because I had a four-day-old baby! Maybe I would have had a more exuberant response at a less crazy time. It was pretty surreal, though--knowing I would now be a published author. I smiled, showed my mother-in-law the email. Then I probably took a nap. Lol.

Q. What kind of input did you have in choosing an illustrator for the book?
A. My publisher chose the illustrator (more specifically the art director for THE REMEMBER BALLOONS chose the illustrator) and I couldn't have been happier! Dana's art is so exquisite and joyful and sorrowful and whimsical all at once. She really brings the story to a whole other level with her illustrations.

Q. What jumped out at you when you saw the first sketches and jacket cover?
A. When I wrote THE REMEMBER BALLOONS, I had envisioned people very similar to Dana's people...sweet and sketchy and dreamy. So when I saw her sketches for the first time, they felt somewhat familiar. Yet, they were also filled with happy surprises. There were so many elements of the illustrations I could have never even conceived of myself.

Q. How long did THE REMEMBER BALLOONS take to be published—from the time you received an offer until it was printed?
A. Remember that four day old baby? My book just released, and she is 2 1/2 now!

Q. Was there a part that you really loved but had to edit out? Or did you think of something later that you wanted to add?
A. If you've read the book, you will know that a very special part of the story is the silver balloon. The "contents" of the balloon were different in the original. I remember telling my agent. "Don't make me change the silver balloon!" And he didn't. But the first thing my acquiring editor said to me was, "We need to change the silver balloon." The changes were definitely for the better (emphasis 1,000 times on the word definitely), but it was hard at the time.

Q. When you read THE REMEMBER BALLOONS to kids, which part of the book gets the best reaction?
A. The kids always like the images of the memories in the balloons. A particular favorite illustration is the spread of all of Grandpa's memory balloons.

Q. Did you create any book swag for THE REMEMBER BALLOONS? If so, what kind?
A. I created some bookmarks. I haven't created much yet, but I plan to make some more bookmarks in the future. I might even make some stickers. But swag can get expensive, so I have to make sure it's being used effectively.

Q. What is your #1 tip for picture-book writers?
A. Read. Read. Read. Go to the library and read all the books. Put all the new releases on hold. There is a certain structure and art of picture books that you will only get if you immerse yourself in the genre.

Q. Do you have a favorite writing exercise or marketing tip that you can share?
A. One thing that has been really helpful for me in promoting my book is my debut group. We band together, support each other through the ups and downs of a debut year, form lasting friendships, read each others' books, and talk about each others' books. If you are a debut author, find a debut group! If they are full, create another. (My debut group is called Epic 18, and there are so many fabulous books among these incredible authors and illustrators.)

Q. What are you working on now?
A. I am working on a picture book that is in the same emotional vein as THE REMEMBER BALLOONS. I also have a couple middle grade novels I am revising.

If you have read THE REMEMBER BALLOONS, please consider writing a review:
Amazon
GoodReads