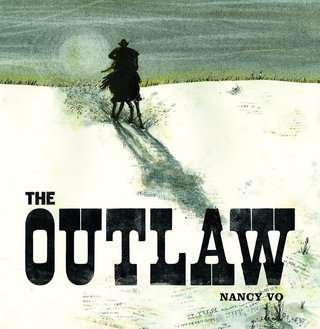 THE OUTLAW By Nancy Vo (Groundwood Books, 2018)
Inspired by a book, a movie, and an SCBWI conference, illustrator Nancy Vo created her #firstpicturebook. “Stunning" (School Library Journal) and "bewitching" (New York Times), THE OUTLAW is “a picture-book Western that upends many of the genre's gunslinging shootout-and revenge-narrative tropes" (Horn Book). Today she tells us all about writing her debut picture book.

Q. What inspired THE OUTLAW?
A. The Outlaw was a confluence of inspirations. I had finished reading the darkly funny SISTERS BROTHERS by Patrick DeWitt, watched the Coen Brothers' version of True Grit, and attended a SCBWI conference in Western Washington where Mac Barnett gave an inspiring talk to recall things we liked as children and Sophie Blackall had us drawing shadows. I made a drawing when I returned home (see picture). I had a drawing but no story.

Q. Do you write by hand or on the computer?
A. I started writing the manuscript on Post-It notes. Then moved onto computer so that I could track changes.

Q. What is your favorite part of the book? And was that part in the first draft?
A. The initial image of the shadow over the train tracks is still my favourite.

Q. How did you select the names for your characters?
A. The characters are not named because naming does not add anything to this story. It would change the tone completely.

Q. What made you decide to tell the story in third person?
A. THE OUTLAW is narrated by a crow.

Q. How much of the story did you know when you began writing THE OUTLAW?
A. As mentioned earlier, The Outlaw began as an image without a story. I had a loosely constructed narrative in my head as I worked through the Post-Its, but a lot of lines were thrown out until the story was as lean as it needed to be.

Q. Did THE OUTLAW receive any rejection letters? If so, how many (ballpark)?
A.  Hmm... no there were no rejection letters exactly. I sent first to Groundwood Books because they are part of Anansi Press, publisher of the SISTERS BROTHERS. When I did not hear back after three months, I went ahead and submitted to American agents/publishers. Then in the fourth month, I received an email from Sheila Barry asking if the project was still available. It was and I informed everyone else that THE OUTLAW was no longer available.

Q. Describe your reaction when you received an offer on THE OUTLAW.
A.

Q. How long did THE OUTLAW take to be published—from the time you received an offer until it was printed?
A. Oh, I have to look that up. Wait... Contract signed in summer 2015, book released in spring 2018 - nearly three years.

Q. Was there a part that you really loved but had to edit out? Or did you think of something later that you wanted to add?
A. There was a scene that I didn't exactly love but I was still at a stage where I thought an explanation was needed for why the Outlaw went away. However, after feedback from my trusty critique group, I took out the scene with his mother.

Q. Have you read THE OUTLAW to  kids? If so, which part of the book gets the best reaction?
A. Yes, I have read the book aloud to kids. I think one comment that caught me off guard was, "The Outlaw is chubbier after he stops breaking the law." And another student saying, "Probably because he is not running away so much." It was so hard to keep a straight face for that.

Q. What is your #1 tip for picture-book writers?
A. Same as for writers. Read. A lot.

Q. Do you have a favorite writing exercise or marketing tip that you can share?
A. Lisa Cinar taught a picture book class where she showed us 10 images and we had 5 minutes to come up with a line that would begin a story. It was a really effective way to use an hour to brainstorm story ideas. You are less inhibited this way, and sometimes get good surprises.

Q. What are you working on now?
A. I just finished meeting a deadline for the second picture book for Groundwood, The Ranger.

If you have read THE OUTLAW, please consider writing a review:
Amazon
GoodReads