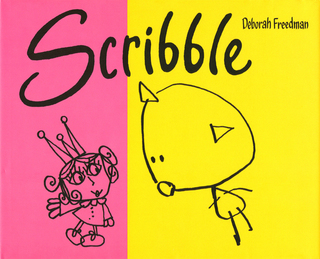 SCRIBBLE by Deborah Freedman (Knopf Books for Young Readers, 2007)
A former architect, award-winning author and illustrator Deborah Freedman looks back to 2007 and talks about how she constructed her first picture book SCRIBBLE—"a clever gem of a book" (Publishers Weekly).

Q. Was SCRIBBLE the first picture book manuscript that you ever wrote? If not, what was the first picture book you wrote and what happened to it?
A. Oh my goodness no, SCRIBBLE is not the first picture book I ever wrote! I’d been messing around with picture book ideas for years before SCRIBBLE. My first books were tiny, personal little things that I made for my daughters when they were babies; eventually I started taking myself more seriously and made books with titles like THE PRINCESS SISTERS, and HERE COMES THE MARCHING BAND. I think of them now as ‘practice books’, an absolutely necessary part of my writing education, but tucked away in a dead-dummy drawer, where they belong.

Q. What inspired SCRIBBLE?
A. My daughters would have spent their entire childhoods drawing at the kitchen table, if I’d let them. They would draw one elaborate scene after another, and say, “write this down, Mommy. This is a picture of… the kitties are dancing around a maypole and then they will have cake,“and I’d dutifully write whatever along the bottom of the picture. I adore kids’ drawings, and one of my favorite things about them is that there is almost always a story behind them. Ask a child about even the scratchiest scribble, and chances are, there’s an imaginative narrative that goes with it. So all of that gave me the idea to tell a story about two sisters who like to draw, and the story behind their drawings.

Q. How did you pick the title of your book?
A. I really don’t remember… the title was there from the very beginning.

Q. What is your favorite part of the book? And was that part in the first draft?
A. My favorite part is probably when the two drawings, Scribble and Aurora, fall in love — an essential part of the book which was not there until the final draft. Which just goes to show —sometimes the best ideas arrive during revisions!

Q. How did you select the names for your characters?
A. The sisters were named after my daughters, Emma and Lucie, although looking back, that was probably not a very good idea! Because the story isn’t true, and I still feel bad when people assume that it is. The real Emma and Lucie were mostly very kind to each other when they were little, but that would not have made a very interesting story. The Princess’s name, Aurora, comes from Sleeping Beauty.

Q. Why did you decide to tell the story in third person?
A. The story is, in part, a slanted take on Sleeping Beauty, so I wanted it to have a fairy tale voice.

Q. How much of the story did you know when you began writing SCRIBBLE?
A. I knew that it would be about a child who imagines her drawing coming to life, who runs away with her drawing.

Q. Did you write the story first, then illustrate it? Or did the images appear before the words?
A. I tend to “write with words and pictures” together. If I'm not doodling in a sketchbook or making thumbnail sketches while I’m writing, I at least have images in my head. It’s hard for me to separate the two.

Q. When you submitted SCRIBBLE to publishers, did it receive any rejection letters? If so, how many (ballpark)?
A. SCRIBBLE received three rejection letters, for three different versions of the story. After each “pass”, I went back and started all over again. Two years of revisions definitely made the story much stronger, and I’m truly indebted to the two editors who took the time to give me honest feedback.

Q. Describe your reaction when you received an offer on SCRIBBLE.
A. Thrilled… and a little flabbergasted! After working on the book for so long, I could hardly believe it would one day be “finished” and that an editor was actually calling me.

Q. How long did SCRIBBLE take to be published—from the time you received an offer until it was printed?
A. SCRIBBLE was released about two years after the initial offer — one year after I turned in the final art.

Q. Is there anything you would change in the book today if you could reprint it? (Was there a part that you really loved but had to edit out? Or did you think of something later that you wanted to add?)
A. Well… I would redo the art. My skills have improved in the last ten years! But I’m still proud of the story as it is.

Q. When you do readings of SCRIBBLE, which part of the book gets the best reaction?
A. No question, the spread where Scribble gives Aurora a kiss! I never know if kids will say “awwww….” or “eeeeewwwww!” Either way, it’s always a funny moment.

Q. Can you share any funny or memorable parts of letters from kids about SCRIBBLE?
A. I love getting children’s drawings, their versions of Scribble and Aurora. But here’s the best ever letter I received, after a SCRIBBLE school visit: I loved the presentation with Deborah Freedman and the book of SCRIBBLE. The presentation was so AWSOME. I want to read the book SCRIBBLE for every second of my life!

Q. What is your #1 tip to those who want to write picture books?
A. READ READ READ, and then read some more. With intention.

Q. What are you working on now?
A. My 7th picture book. I feel so lucky to be saying that.

Thanks, Karlin, for asking me to revisit SCRIBBLE!

To learn more about Deborah's works including her upcoming book SHY, visit her at her website or @deborahfreedman.