A MORNING WITH GRANDPA 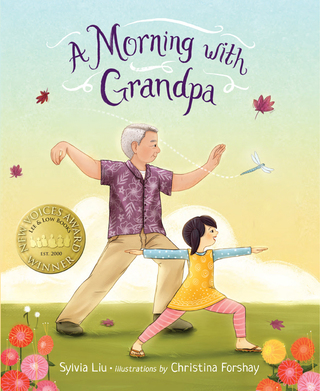 A MORNING WITH GRANDPA by Sylvia Liu and illustrated by Christina Forshay (Lee & Low, 2016)
Environmental lawyer turned children’s author and illustrator, Sylvia Liu was lucky to do what she loved, protecting the oceans and the environment at the U.S. Department of Justice and the nonprofit group Oceana. Her good fortune continued when she won Lee & Low's 2013 New Voices Award. Today she shares the story behind all the work that went into the winning manuscript and her debut picture book, A MORNING WITH GRANDPA, illustrated by Christina Forshay.

Q. Was your first published picture book, A MORNING WITH GRANDPA, also the first picture-book manuscript you wrote? If not, what was the first book you wrote and what happened to it?

A. No, it wasn’t. The first picture book manuscript I wrote was with my husband on our honeymoon in 1997! It was about a puffer fish finding his special ability after meeting other underwater creatures. I wrote my first solo manuscript about six years ago, about a rubber duck lost at sea. I made a dummy of it and it’s in a drawer now, but may one day find a home somewhere.

Q. What event or person inspired A MORNING WITH GRANDPA?

A. My father and his relationship with my two daughters inspired the story. He has practiced tai chi for over 30 years, and he also does another practice called qi gong. Qi gong uses breathing techniques and body postures to move “qi” (the Chinese word for life force) around the body for healing and health. I was on a family vacation watching him do qi gong, when the story came to me, mostly in dialogue.

Q. How did you pick the title of your book? Was A MORNING WITH GONG GONG a consideration?

A. Yes! A MORNING WITH GONG GONG was my original title. The folks at Lee & Low Books suggested something less difficult to pronounce than “Gong Gong” to appeal to the widest audience possible. We went through a lot of different suggestions and finally landed on A MORNING WITH GRANDPA.

Q. What is your favorite part of the book? And was that part in your first draft?

A. Good question! It might be these two lines:

“He was a warm summer breeze blowing through the trees. Mei Mei was a frisky fall wind tumbling among the leaves.”

My first draft, before it went through many critiques, did not include these lines. The story was told completely in dialogue, with the action left to the illustrations. The draft I submitted to Lee & Low did include the almost identical lines:

“Gong Gong was a warm summer breeze wafting through the trees. Mei Mei was a frisky fall wind flying with the leaves.”


Q. How did you select the names for your characters?

A. Gong Gong means “Grandfather” in Mandarin Chinese, and Mei Mei means “little sister.” I grew up spelling it as “May May” (I was the May May of the family), but that was our family’s ad hoc transliteration. My critique partner, Teresa Robeson, who is originally from Hong Kong, commented on my unorthodox spelling in an early draft.

Q. Why did you decide to tell the story in third person?

A. I didn’t consciously make a choice; it came out that way.

Q. How much of the story did you know when you began writing A MORNING WITH GRANDPA?

A. Not much. The writing was very organic. The characters appeared first, in dialogue.

After the story was accepted, my editor, Jessica Echeverria, and I spent many months going back and forth with even more drafts, so the story continued to improve and change. I believe we were up our eleventh draft when we were done. For example, many of the specific poses in the story were changed during the editing process.

The final story is very different from my first drafts, but the heart of it remains the same—the loving and funny relationship between Gong Gong and Mei Mei.

Q. Did you submit A MORNING WITH GRANDPA to any other publishers before entering it in the New Voices Award contest? If so, did you receive any rejection letters?

A. No. As soon as I wrote it, I realized it was something I could submit to the New Voices Award contest. I had known about the award for over a decade. After I started writing picture books, I kept the award in the back of my mind each year, but it wasn’t until I wrote A MORNING WITH GRANDPA that I felt I had a story that was suitable for the contest.

Q. Describe your reaction when you learned that A MORNING WITH GRANDPA won the New Voices Award.

A. When I heard my editor introduce herself on the phone (a few days before Christmas 2013), my first thought was, “Oh, I must be a finalist,” because it wasn’t even in the realm of possibility that I could be the winner. Then my reactions were: SHOCK, THRILL, SQUEEEE (in my mind), and after I hung up, I danced around the house.

I wanted to share the news with my critique group, but I was under strict instructions not to share it beyond my immediate family until it was officially announced in mid-January 2014. That was a hard three weeks!

Q. What kind of input did you have in choosing an illustrator for the book?

A. I didn’t have any input, but I couldn’t be happier when I found out Lee & Low had chosen Christina Forshay. I didn’t know her work at the time, but after I saw an image of a pirate girl facing a giant octopus in her portfolio, I knew we were kindred spirits.

Q. What jumped out at you when you saw the first sketches and jacket cover?

A. How absolutely adorable Mei Mei was, and how Christina perfectly conveyed both Mei Mei’s and Gong Gong’s personalities. The colors and overall look of the illustrations were perfect.

Q. How long did A MORNING WITH GRANDPA take to be published--from the time you received an offer until it was printed?

Q. Is there anything you would change in the book? (Was there a part that you really loved but had to edit out? Or did you think of something later that you wanted to add?)

A. Nothing major. My editor and I spent a lot of time wordsmithing every sentence to make each one sparkle. We swapped out a few different yoga and tai chi poses, but I wasn’t married to them. I am really happy with the end result.

A. I have several picture manuscripts in revision stage, others in the drafting/development stage, a young MG novel in revision stage, and an older MG novel that is about one-third written. I have a picture book dummy out on submission to agents now.

I also continue to update my portfolio, developing and completing new illustrations. (My portfolio can be found at www.enjoyingplanetearth.com).

*What I mean is never quit learning, trying, reading a LOT both in and out of your genre, and writing a LOT. Get constructive feedback. Join a critique group. Join the SCBWI. Find your kid lit community (may I recommend www.kidlit411.com?).
Be sure to visit the rest of the blog tour for
A MORNING WITH GRANDPA.

Visit her portfolio at www.enjoyingplanetearth.com, her blog at www.sylvialiuland.com, and the kid lit resource site, www.kidlit411.com—named by Writers Digest as one of the 101 Best Websites for Writers.

Thank you, Karlin for the interview!

Thanks for sharing, Karlin & congrats, Sylvia!!

Great interview! I love learning from colleagues who love picture books as much as I do. Thanks!

I love this blog tour, Sylvia. At each stop I learn something new about you.

Somehow, my comments never posted on this interview! So proud of Sylvia for all of her hard work- her book is fantastic! Great interview, Karlin, thanks!