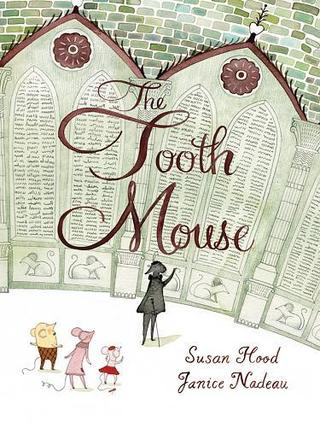 THE TOOTH MOUSE by Susan Hood and illustrated by Janice Nadeau (Kids Can Press, 2012)
Former book and magazine editor Susan Hood has written hundreds of children’s books. Her new picture book ADA'S VIOLIN is "a virtuoso piece of nonfiction, gloriously told and illustrated" (*School Library Journal). Today she looks back and discusses how she created her first picture book, THE TOOTH MOUSE.

Q. What inspired THE TOOTH MOUSE?
A. I interviewed a little Parisian girl for a column I wrote called “Kids Like You” in Nick Jr. Family Magazine. Since she was six, I asked her what happens when you lose a tooth in France. Much to my surprise, she said, “I give it to the Tooth Mouse, of course!” I had never heard of such a thing! It turns out that many, many countries around the world (Argentina, Algeria, Croatia, the Dominican Republic, Greece, Mexico, Russia, South African, Spain, and on and on) have a Tooth Mouse instead of a Tooth Fairy. Who knew?

Q. How did you pick the title of your book?
A. I was going to call it Sophie: The Story of the Tooth Mouse, but after discussions with my editor we decided to get straight to the point.

Q. How did you select the names for your characters?
A. I named the main character Sophie after the little French girl who told me about The Tooth Mouse.

Q. Why did you decide to tell the story in third person?
A. Because I was modeling it on traditional fables.

Q. How much of the story did you know when you began writing THE TOOTH MOUSE?
A. I knew the ending, but had no idea how to get there.

Q. Did THE TOOTH MOUSE receive any rejection letters? If so, how many (ballpark)?
A. Yes. My first version had the same main character and the same ending, but it was a completely different story. A more modern story. My editor thought it had possibilities, but it was rejected in Acquisitions. I was so disappointed, I stuck it in a drawer for years.

Now I know why it was rejected; I hadn’t yet learned how picture books work. With beginning readers, the art mirrors or repeats the text pretty closely. Those visual clues help a young reader begin to decode the words. But with a picture book, the art and text can be very different, each contributing half of the story. For example, (SEE CAT SPREAD ABOVE) here’s a scene in the published book where the young mice are attempting the first challenge in their quest to become the next Tooth Mouse. They must prove they are brave by obtaining the whisker of a cat.

Initially, I had written all of this out. You know, “two mice tiptoed up to a sleeping cat….” Then in an AHA! moment, I realized I didn’t have to. The art would tell the story. Kids love this spread, because they can follow the illustrations and tell what happened in their own words.

Q. Describe your reaction when you received an offer on THE TOOTH MOUSE.
A. Elation! And it was all thanks to my editor who believed in the idea and in me. She contacted me years after that first rejection and asked if I wanted to dust the book off and try again. She suggested I think of the origins of the Tooth Mouse; that’s what gave me the idea to tell the story as a fable. I changed the plot, but not the character or the ending. This time it worked and was accepted! Needless to say, I dedicated the book to that editor!

Q. What kind of input did you have in choosing an illustrator for the book?
A. My editor suggested Janice Nadeau, who is from Canada. She had won Canada’s equivalent of the Caldecott Medal—the Governor General’s Award for Illustration—three times. As you can imagine, I didn’t hesitate a nanosecond before saying YES, PLEASE! She did the book in watercolor and I just love all the tiny details and the beautiful water marks on the art.

Q. What jumped out at you when you saw the first sketches and jacket cover?
A. Some of the sketches were a little indecipherable. But of course, Janice didn’t want to paint all those little mice until she got the layout right.

Q. How long did THE TOOTH MOUSE take to be published--from the time you received an offer until it was printed?
A. It took three years from offer to publication, but—get this!—maybe seven years from first draft to finished book. It took me about a year to write the first version and then after it was rejected I put it away in a drawer for about two years. When my editor contacted me again, I completely revised the book for another year. Then it took three years to do the art and get it into bookstores!

Q. Is there anything you would change in the book today if you could reprint it? (Was there a part that you really loved but had to edit out? Or did you think of something later that you wanted to add?)
A. We learned something from librarians. There’s a chart on the final endpapers that shows tooth traditions in other countries. It was originally on the right side. But librarians told us it got covered up when the library sleeve was attached so we moved it to the left side in the second printing.

Q. Can you share any funny or memorable parts of letters from kids about THE TOOTH MOUSE?
A. Thank you very much for coming to our classroom. You are a great Author!! You would be a brilliant Chapter book writer.... Yours truly, Will" I liked Will’s vote of confidence in this letter because I’ve never written a chapter book before! (Here’s hoping he was right: my first middle grade novel called LIFEBOAT 12 comes out in Fall 2017.) P.S. Can you write a story about the tooth pig?Apparently, in Greece there is a Tooth Pig (in addition to a Tooth Mouse) so this kid was ready for a sequel!

Q. When you do readings of THE TOOTH MOUSE, which part of the book gets the best reaction?
A. The ending. People gasp with surprise and then say, “Of course!”

Q. What are you working on now?
A. I’m excited to say I have four picture books coming out in 2016! LEAPS AND BOUNCE, ADA'S VIOLIN, MISSION: BACK TO SCHOOL, and THE FIX-IT MAN.

Q. What is your #1 tip to those of us who want to write picture books?
A. Others have said to join SCBWI, participate in a critique group, and never give up, all of which I second. I would add this: read lots of picture books (and I mean hundreds, thousands)! Read both the classics and the brand-new award-winners to see how they have evolved over the years. A good place to start with new books is the Best Books of the Year list from Bank Street. An interesting exercise is to type out the text of a favorite picture book and then compare it to the finished book. It will help you see how the text works hand in hand with the art to create something new. Two heads really are better than one!

To learn more about Susan and all her books, visit her website.

I read this awhile back & really enjoyed it. And the illustrations are phenomenal!