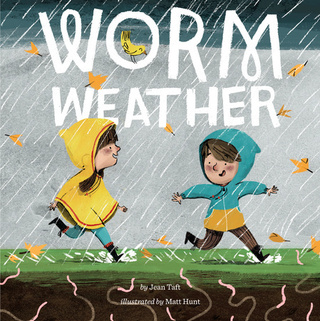 WORM WEATHER by Jean Taft and illustrated by Matt Hunt (Penguin, 2015)
Today we are chatting with Jean Taft about her first picture book WORM WEATHER—"part of a Common Core series that highlights such concepts as weather, animals and friendship – but there’s nothing stiff about the sweet story that encourages readers to look for changes in the weather, imagine life as a worm, and revel in the simple pleasures of rainy days and rainbows” (The Virginian Pilot)

Q. Is WORM WEATHER the first picture book manuscript you ever wrote? If not, what was your first manuscript and what became of it?
A. Hi Karlin! Thank you so much for inviting me to My First Picture Book Q&A. WORM WEATHER just came out in October 2015 and these past few months have been very exciting! I am so happy to be invited here. WORM WEATHER was the first piece I wrote that I thought could actually become a book. It was also the first story I had ever written in rhyme and now most of my work is in rhyme. I first presented WORM WEATHER to a group of peers at the NESCBWI Spring Conference in 2011, but it wasn’t until 2014 that WORM WEATHER found a home with Penguin Young Readers. (And yes, it had been rejected by several editors and agents prior to publication!)

Q.What event or person inspired WORM WEATHER?
A. I dedicated the book to my mom because she really did take my sister and me on walks in all kinds of weather! We always loved that rainy weather when the worms crawl out on the sidewalks. You know, worm weather! Of course, my sister and I also liked snowy weather, but that’s a different story!

Q.How did you pick the title of your book? Were there other titles that you considered?
A. It was always WORM WEATHER. Thankfully the publisher also liked the title.

Q.What is your favorite sentence or scene in WORM WEATHER? Was it in the first draft?
A. That’s like asking a parent which kid is your favorite kid! How can I choose only one among wiggling worms, splashing in puddles, thunder, lightning, mud, a belly flop, pizza, a rainbow, and the playground?

Q.How did you decide to tell the story in third person?
A. I never considered telling the story any other way.

Q.WORM WEATHER is in rhyme. Is this how you first wrote it? Did you write a version of the story in prose?
A. This story was always in rhyme. One day when I was walking my dog in the rain and the worms were out on the sidewalk, it hit me: drip-drop-skip-and-hop. And WORM WEATHER the rhyming story was born! This was my first story in rhyme, and now I love writing in rhyme. I enjoy the challenge of telling the story and moving the story along with rhyming words. However, this is an interesting question as I just took a story that I originally wrote in prose and rewrote it in rhyme and now it is much more fun to read!

Q.How much of the story did you know when you began to write?
A. I knew I wanted to write a story about walking in the rain when the worms crawl out on the sidewalk. I did not know at the beginning that there would be mud and pizza along with the rain and the worms!

Q.Did you map out the pages with a dummy? Or did you leave it up to the editor and illustrator?
A. When I do school visits and we talk about book lingo, I always tell the students that the book dummy is one of my favorite things! I make a book dummy out of index cards for all my stories and work on the pagination from that. Sometimes I don’t fully understand how a story is (or isn’t) flowing until I make a book dummy. When I submitted WORM WEATHER, the editor asked that the story be paged out.

Q.Describe your reaction when you received an offer on WORM WEATHER.
A. Over the top excited! Completely in shock! Can I tell you the whole story? I participated in a writer’s round table at the NY SCBWI conference in 2014 and had decided to bring WORM WEATHER at the last minute. The editor at the table, Bonnie Bader, requested my manuscript which was so exciting! But it wasn’t until the next day when I met her again that it became even more real. She told me she had been looking for me and wanted to be sure I would send my manuscript to her. She gave me her contact information again and I could barely even think! In fact, I was so in shock I didn’t even give her my business card! It was completely overwhelming. And then, as I was at the conference, I had to sit through a number of key notes! I was so distracted I can’t even remember who they were. I just wanted to jump up and be happy! Instead I drew doodles all over my notebook. I will never forget that joy! Then, months later the offer and the contract finally arrived! And it was joy all over again!

Q.What kind of input did you have in choosing an illustrator for the book?
A. I had no input and I didn’t even blink an eye as I thought that was normal. I had no idea how the story was going to look in pictures until I received the sketches. I loved the sketches! I have written another weather story (snow) and I would love to have it illustrated by Matt Hunt. I really want to see those two kids in their snow suits! I want to say a great big thank you to Matt! Matt’s illustrations truly bring WORM WEATHER to life. Hi Matt!

Q.What jumped out at you when you saw the first sketches and jacket cover?
A. Well, with the cover it was love at first sight! The sketches I had seen were all in black and white. But the cover was finished! And in color! I made so many copies of that cover, sent it out to friends and family, got bookmarks, hung it in my office. I loved the sketches, but once I saw the cover I knew I was going to love the book.

Q.How long did WORM WEATHER take to be published—from the time you got an offer until it was printed?
A. Forever! I met the editor in February 2014 and sent her the story right away. I didn’t hear back until May! Then the contract arrived in June with a publication date set for 18 months later, October 2015.

Q.What are you working on now?
A. So many things! I feel lost if I don’t have a pile of stories to work on! I love school visits and I have been revising my school presentations. I currently am working on two picture book series. One stars a koala, the other stars a goat. Both are in rhyme and so much fun to write. I also have any early chapter book series in the works. As my editor just left Penguin and I am without an agent, I have been researching and querying agents. Always writing! And reading! I forgot to mention reading!
I just wanted to add one more thing. Everyone has tips for writers and here is mine. Your first book only comes out once! Your first book is very special. You will never have your debut book come out again! Live it up! Enjoy it! Make a big deal out of it! If you don’t, no one else will either. When WORM WEATHER was coming out I planned both a children’s book signing party at my local book store and a cocktail party at a restaurant. I wanted both the kids-cupcake-party AND the champagne-party! Surround yourself with people who love you and are happy for your success. If you don’t have any people in the book business to invite, don’t fret! Invite those who are important to you. I did and I enjoyed every minute of that day! You will, too!
To learn more about Jean, visit her website.
1 Comments

This looks like such a cute book! Every time I walk my dog, Becca after it rains, I perform many worm rescues by placing as many as possible that get stranded on the path, back in the grass or dirt. Congrats on this book, Jean & thanks for sharing, Karlin :)!