WISHING FOR A DRAGON 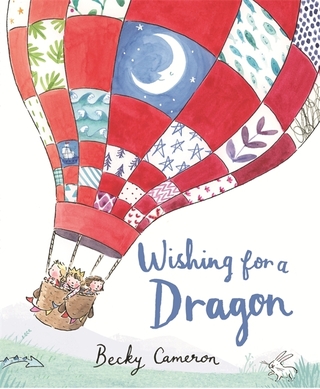 WISHING FOR A DRAGON By Becky Cameron (Hodder, 2018)
Becky Cameron is a graduate of the Cambridge School of Art and the illustrator of PADDINGTON & THE CHRISTMAS VISITOR. And recently her #firstpicturebook as an author/illustrator was published. Inspired by Becky’s childhood memories of playing with her sisters, WISHING FOR A DRAGON is “a delightful whimsical debut . . . with just the sort of lovely little artistic touches we love to see in picture books” (ReadItDaddy).

Q. You worked as an illustrator before WISHING FOR A DRAGON. How did you make the transition to writer/illustrator and how does it compare with being an illustrator of someone else's work?
A. I knew for a long time that I wanted to illustrate and write my own books for children, it just took me a while to figure out how! It was after some research that I decided the best way to get into children's books was to go back to university so I saved up and completed a Masters in Children's Book Illustration at Cambridge School of Art. I learnt a lot in that year and a half about the structure and pacing of books but also about the industry.

I loved the creative freedom of writing my own narratives on the course and was over the moon that my first deal out of university was for one of my own books (Wishing for Dragon). From there it all just fell into place! I've illustrated other people's texts since and I think it's just a very different experience, I like the process and freedom of writing my own books but equally it can be a joy to help bring someone else's words to life. I think probably I'm still transitioning from illustrator to author-illustrator but I'm doing a lot more writing these days and an evening course on writing for children so hopefully there will be more to come.

Q. Was WISHING FOR A DRAGON the first picture book manuscript you ever wrote? If not, what was the first picture book you wrote and what happened to it?
A. It was actually the third or fourth I'd written, and the least finished when my publisher picked it up. It was very rough around the edges and the illustrations very much informed the text (it was wordless to begin with- gasp!) My editor Emma helped me to restructure it and add more depth.

Q. What inspired WISHING FOR A DRAGON?
A. The imagination of me and my sisters when we were children and the endless games we played together.

Q. How did you pick the title of your book?
A. I can't count how many titles we went through for this book! Originally it was called "We're off on an Adventure" (quite a mouthful). Then for a long time we referred to it as 'adventure story' and then 'dragon book' and finally, after toying with lots of variations, my editor and I settled on WISHING FOR A DRAGON. I think it was the right choice to have the dragon in the title because he is such a central character.

Q. What is your favorite part of the book? And was that part in the first draft?
A. I think my favourite part is when they finally meet Ella's dragon. I wanted it to be clear as soon as you saw him that he wasn't a scary dragon and I think (I hope!) that comes across in the text and the image.

Q. How did you select the names for your characters?
A. I probably used an online baby name website. I just went for names that I thought sounded nice together!

Q. Why did you decide to tell the story in first person?
A. That is a very good question. I'd like to say it was done consciously but the truth is that was just how the story came out when I wrote it. I think because one of the children has this secret wish (to see a dragon) I wanted it to be from her perspective. I think because it was influenced by my childhood memories I probably felt like in a way I was the little girl telling the story and I was right in the action.

Q. How much of the story did you know when you began writing WISHING FOR A DRAGON?
A. Not very much! It was rewritten so many times I don't think much from the first draft has remained in the final book!

Q. Did you write the story first, then illustrate it? Or did the images appear before the words?
A. I made the pictures first and when my publisher picked it up it was at a very early stage and wordless which I think is quite unusual. To make the text work we had to restructure and look at the text separately before redrawing the rough artwork to fit the pacing of the text.

Nowadays the text comes to me more at the beginning of the idea process and then the pictures and text sort of develop together as one which I think is probably a better way to do it!

Q. Did WISHING FOR A DRAGON receive any rejection letters? If so, how many (ballpark)?
A. It didn't because it wasn't submitted as such. I was lucky to meet lots of publishers and agents at my graduation show and had meetings with some of them where I showed them my portfolio and dummy books. A few showed interest in Wishing for a Dragon but were perhaps a bit apprehensive as it was so unfinished. I was very grateful to Emma Layfield at Hodder for putting her trust in me.

Q. Describe your reaction when you received an offer on WISHING FOR A DRAGON.
A. I did a little dance around the room before composing myself and setting to work on finding an agent! I had no idea what I was doing with contracts so thankfully the publisher was happy to wait for me to find an agent before I signed on the dotted line!

Q. How long did WISHING FOR A DRAGON take to be published—from the time you received an offer until it was printed?
A. Two years. I'm still getting used to how slow this industry is!

Q. Was there a part that you really loved but had to edit out? Or did you think of something later that you wanted to add?
A. I've squeezed all of my favourite things into this book and I don't think I've had to leave anything out.... oh, other than the text originally started with 'We're off on an adventure...' which was then repeated throughout the text which I quite liked!

Q. Did you create any book swag for WISHING FOR A DRAGON? If so, what kind?
A. No book swag but now I'm thinking maybe I should do! Plushy hot air balloons anybody?!

Q. What is your #1 tip to those who want to write picture books?
A. Don't give up! Your first, second and third ideas might all be rubbish and get rejections but keep working at it until you hit gold.

Q. Do you have a favorite writing exercise or marketing tip that you can share?
A. Keep making things for yourself. Write for yourself and draw (if that's your thing) for yourself. You never know what new ideas will spring from the little things you're making for pleasure. Even when I have a deadline looming I try to write down new ideas or sketch characters that pop into my head. They might not turn into anything or they might just be your next big story idea.

Q. What are you working on now?
A. I'm working with Hodder again on an illustration brief for an exciting book project and I've just submitted a new picture book text to publishers. I've been working on it for some time, fingers crossed it finds a publishing home because I really love it!