There Goes the Ghost! 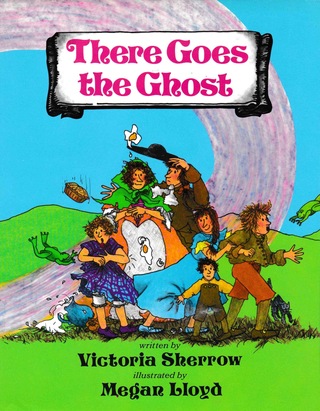 THERE GOES THE GHOST by Victoria Sherrow and illustrated by Megan Lloyd (Harper and Row, 1985)
My first Q&A blog entry starts with Victoria Sherrow—author of over 80 books for teens and children. She teaches at The Institute of Children’s Literature and at Write Yourself Free where I was fortunate enough to be her student. Some of her picture books include CHIPMUNK AT HOLLOW TREE LANE and WILMA RUDOLPH: AN ON MY OWN BIOGRAPHY. But today we are talking about her very first picture book: THERE GOES THE GHOST.

Q: Was your first published picture book, THERE GOES THE GHOST, the first picture book manuscript you ever wrote? If not, what was the first book you wrote and what happened to it?
A: THERE GOES THE GHOST! wasn't my first PB manuscript. I'd written several others before that one was accepted. I'm not sure which was the very first, but a couple I do recall are PETER'S PURPLE TREES and LEFT-BEHIND LISA. The first one never did go anywhere, but LEFT-BEHIND LISA was published as a short story.

Q: What event or person inspired THERE GOES THE GHOST?
A: The idea for THERE GOES THE GHOST emerged while I was researching ideas for holiday stories. I had set a goal of writing and submitting at least one new story each month, including stories with holiday themes. While I was looking at old folklore books to learn more about Halloween customs, I came across some material about a mischievous and tenacious ghost called a boggart and started thinking . . . What if a family ended up in a house with a boggart? What kinds of tricks might the boggart play on them? How would they try to get rid of it? This led me right into a plot.

Q: How did you pick the title of your book?
A: The title came about as I thought about lines in the story and the main events. It also sounded catchy.

Q: What is your favorite part of the book? And was that part in the first draft?
A: I like the rhyming parts that show what the naughty ghost did—annoying things but not dangerous. I also like the twist at the end. All of the ghost's activities were in the first draft and so was the idea for the twist ending, but I reworded things as I revised.

Q: How did you select the names for your characters?
A: I chose characters' names to suit the type of story (an original folk tale) and also because of their 'sound' and the way they fit into the rhythm of my story. The parents are not named but the four children are Fanny, Hetty, Georgie and Will.

Q: How did you decide to tell the story in first or third person?
A: Since this is an original folk tale, I used third person with an omniscient/storyteller viewpoint, which is typical of folk tales.

Q: How much of the story did you know when you began to write?
A: When I first began writing the story, I had a good idea about the main events--that a family would move into a house that was haunted by a mischievous ghost and try unsuccessfully to get rid of it. To write the middle scenes, I did research to find out how people in past centuries tried to get rid of ghosts. I also knew that at the end, the family would give up and move to a new house--and the ghost would end up there, too. Since this was an old-fashioned story, I figured the ghost could ride on the family's "moving wagon" in a butter churn.

Q: Describe your reaction when you received an offer on this book.
A: When the editor at Harper called me to offer me a contract, I was beyond ecstatic. I recall doing a happy dance, jumping up and down, and then calling people I knew would share my excitement.

Q: What kind of input did you have in choosing an illustrator for the book?
A: The editor told me what illustrator they were considering and sent me some books with her work. I thought she was a great choice. I'm not sure what would have happened if I said I didn't want that particular illustrator. I've been happy with the illustrators chosen for all of my PBs.

Q: What jumped out at you when you saw the first sketches and jacket cover?
A: I loved the first illustration samples I saw and felt really lucky that they had decided to do the book in full color. In those days, sample illustrations came in the mail; now we get them via emails and files. I was also pleased with the jacket cover and overall look of the book.

Q: How long did THERE GOES THE GHOST take to be published--from the time you received an offer until it was printed?
A: It took about 2 1/2 years between the time Harper accepted the book until it was published.

Q: Is there anything you would change in the book today if you could reprint it? (Was there a part that you really loved but had to edit out? Or did you think of something later that you wanted to add?)
A: One thing I would change is the illustration on the last page. I'd make the background figures a bit larger so kids don't have to look so hard to see that it is that same family coming toward the house where the ghost in the butter churn just landed.

Q: Can you share any funny or memorable parts of letters from kids about THERE GOES THE GHOST?
A: Kids say they like the rhyming words and the way the ghost says "Ooo-OO-ooh!" in different parts of the book. They also said they liked the funny things the ghost did, as well as the ending, including the part where everyone in the family says, "Off we go!" and then a voice in the butter churn says, "Off we go-o-o!".

Q: When you did readings of THERE GOES THE GHOST, which part of the book gets the best reaction?
A: The reaction in live readings echoes what kids have written in letters. They tend to chime in when I read the parts where the ghost says "Ooo-OO-ooh!" in his "strange, squeaky voice." Kids laugh at the pranks but also sympathize with the family. At the end, kids laugh (but in a rueful way) and they say things like "Uh, oh!" as the family ends up once again with the ghost.

Q: What is your best tip to those who want to write picture books?
A: I have several tips: Read, read, read and write, write, write. Study good books to learn about PB format, structure, and different styles of writing. Write about things that interest and excite you so you can bring that enthusiasm and "heart" to your manuscript, along with your own special voice.