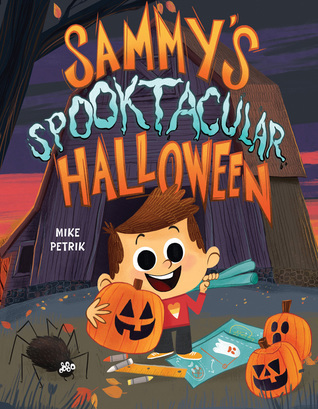 SAMMY’S SPOOKTACULAR HALLOWEEN By Mike Petrik (Two Lions, 2018)
Animator and illustrator Mike Petrik loves Halloween! As a kid, he decorated his house in August. Now, as a grown-up, he’s celebrating this summer with the publication of his #firstpicturebook SAMMY’S SPOOKTACULAR HALLOWEEN—a “lavishly illustrated, laugh-out-loud picture book about a boy who loves Halloween so much that he tries to celebrate it year-round.” (Booklist)

Q. You worked as an illustrator before SAMMY’S SPOOKTACULAR HALLOWEEN.   How did you make the transition to writer/illustrator and how does it compare with being an illustrator of someone else's work?
A. Storytelling was always something I loved to do, but I was never really confident in my ability to write for children's publishing.  I put together a dummy of SAMMY’S SPOOKTACULAR HALLOWEEN to send along with query letters when I was looking for agent representation.  When I found Teresa at Bookmark Literary, she loved the idea so much that we did several rounds of revisions and sent it out, which ended up selling! When I'm illustrating for my own stories, I always kind of know what to expect from myself.  If I'm working on illustrating a story or poem for Highlights for Children, for example, I may have the opportunity to draw something I never would have otherwise, which is always a fun challenge!

Q. What inspired SAMMY’S SPOOKTACULAR HALLOWEEN?
A. Well, it's sort of autobiographical.  My Mom likes to tell the story of the day she came home from work and my brother and I had dragged out and hung all of the Halloween decorations in early August.  I just love the whole Halloween season, and now that I have a family of my own, it's exciting to see my own children get excited about it too.  This past October for my daughters birthday, we did a whole haunted basement walk through for the kids, and my middle son Sammy had a blast jumping out and scaring the older kids!  Guess its in the blood.

Q. How did you pick the title of your book?
A. The title was something we muddled with forever.  Nothing sounded right, and the list grew and grew.  I was even at a point of listing words and combining them together, just as a way to hopefully land on the winner.  In the end, I knew I wanted the words Sammy in there and Halloween in there.  I'm 99% sure it was the awesome folks over at Two Lions who suggested the final title.

Q. Do you write by hand or on the computer?
A. A little of both.  A lot of writing happened alongside drawing in the sketchbook.  Once I had some solid ideas there, I would type it out.

Q. What is your favorite part of the book? And was that part in the first draft?
A. What turned out to be my favorite spread was the one of the haunted house fully operational and showcasing all the cool spooky stuff they had built.  I drew this one last because it was the scariest to me and I was worried that I wouldn't get the image that I had in my head onto the paper.  This particular spread wasn't included in the first draft, but I'm glad it's in there now!

Q. How did you select the names for your characters?
A. Molly, Sammy, and Luke are the names of my three kids!

Q. How did you decide between telling the story in first, second, or third person?
A. Using a narrator to tell the story of Sammy was something I had from the very first dummy.  I wanted a tone of a traditional holiday story, with a narrator taking us through the events, then we get a closer look as we move into the dialogue.

Q. How much of the story did you know when you began writing SAMMY’S SPOOKTACULAR HALLOWEEN?
A. The story structure from the very first dummy to the final is essentially the same.  I knew the story I wanted to tell, and through all of the revisions, the heart of the story remained the same.

Q. Did you write the story first, then illustrate it? Or did the images appear before the words?
A. Writing and illustrating happened along side each other, which was great to keep it fresh for myself as I moved along.  Doodling in the sketchbook would reveal new things that I never would have discovered if I was just writing, and vice versa.

Q. Did SAMMY’S SPOOKTACULAR HALLOWEEN receive any rejection letters? If so, how many (ballpark)?
A. Oh boy, yes.  If I had to put a number on it, probably around 30?

Q. Describe your reaction when you received an offer on SAMMY’S SPOOKTACULAR HALLOWEEN.
A. I couldn't really believe it!  There were a couple of "hey, we are interested in this, but maybe in year or two we can fit it in..." types of responses.  Which, even though they were rejections, it felt nice to get a positive response to the book.  So, when the offer came in, I told myself not to get excited until I actually had my name on a legal contract.

Q. How long did SAMMY’S SPOOKTACULAR HALLOWEEN take to be published—from the time you received an offer until it was printed?
A. It was about a year and a half from when I signed the contract to when I delivered final files.

Q. Was there a part that you really loved but had to edit out? Or did you think of something later that you wanted to add?
A. There was one scene from a very early draft of Sammy writing a love letter to monsters on Valentines Day.  It didn't really fit, so unfortunately had to go.

Q. Did you create any book swag for SAMMY’S SPOOKTACULAR HALLOWEEN? If so, what kind?
A. Nothing yet since we are so early in promoting, but I have some plans!  A trick or treat bag with some Sammy art on it to give away, along with bookmarks that double as trading cards of the characters.  The big one though is I will have a Sammy plush figure to give away as a prize on release day!

Q. What is your #1 tip to those who want to write picture books?
A. Don't stop.  No matter what.  If you really want it, be the one who is up late working on a dummy while every else has thrown in the towel.

Q. Do you have a favorite writing exercise or marketing tip that you can share?
A. I am biased since I am an illustrator, but I don't think I would be able to write without sketching ideas along side the writing.  Maybe this is something to try if you are having a creative block?

Q. What are you working on now?
A. I actually just turned in rough illustrations on a new story for the August 2018 issue of Highlights for Children.  All farm animal themed!

If you have read SAMMY’S SPOOKTACULAR HALLOWEEN, please consider writing a review:
Amazon a>
GoodReads a>
Read More
Be the first to comment
Loading…}