JOURNEY: BASED ON THE TRUE STORY OF OR7, THE MOST FAMOUS WOLF IN THE WEST.

Tags: JOURNEY: BASED ON THE TRUE STORY OF OR7, THE MOST FAMOUS WOLF IN THE WEST, Emma Bland Smith, Robin James, Little Bigfoot, an imprint of Sasquatch Books, October 2016 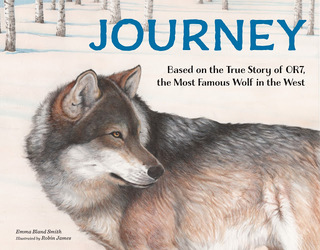 Q. Was JOURNEY the first picture book manuscript that you ever wrote? If not, what was the first picture book you wrote and what happened to it?)
A. No, JOURNEY was probably my seventh or eighth manuscript. I began writing about eight years ago, so I had amassed a small portfolio by the time I signed with my agent (Essie White of Storm Literary) in 2015. My first manuscript is a book about pie, accompanied by recipes. It’s unorthodox, but I’m still fiddling with it, and I have hope! In the meantime, we’re submitting my more traditional picture book manuscripts.

Q. What inspired JOURNEY?
A. I kept reading about this rogue wolf who was getting a lot of attention for traveling a vast distance, from northern Oregon to Northern California. People were worried about his safety (would he get shot?) and wondered if he would ever find a mate. There was the drama, right there, and then, when I read that a child had picked his name in a naming contest, I thought maybe that was the hook I needed to turn the story into a children’s book.

Q. How did you pick the title of your book?
A. JOURNEY is the name that a child (actually two children in different states) submitted in a naming contest sponsored by a conservation organization, Oregon Wild. (The full name of the book is JOURNEY: Based on the True Story of OR7, the Most Famous Wolf in the West.) I love the name because it evokes the wolf’s adventurous spirit.

Q. What kind of resources did you use while researching JOURNEY?
A. Well, mostly the internet. I read all the news articles I could about the wolf OR7. I read a few nonfiction books about wolves. And I contacted several officials with different governmental and conservation organizations. I emailed them a lot toward the end of the editing process, to make sure we got all the facts right. Although some of the events in the story have been fictionalized, much of it is factual, and that was a bit of pressure for me (I don’t usually write nonfiction). We also included a timeline and other nonfiction material in the back matter.

Q. How did you decide where to start and end this nonfiction story?
A. It made sense to start the story with the wolf leaving his family and heading out on his own. As far as the ending, that was a little trickier. In my first version (which I just looked back at), the ending was very vague and open, sort of flowery and poetic--not what editors are really looking for! There wasn’t a very satisfying conclusion because we didn’t really know what was going to happen with Journey. Luckily for me, sometime after that first draft, it came out in the news that he had met a mate and they’d had pups. That made for a much more exciting ending!

Q. What is your favorite part of the book? And was that part in the first draft?
A. I have to say that I’m not sure I have an answer to this one! I’m very fond of just about everything. I think I’m most partial to the sections with the wolf, because of how hard it was to get inside his head without veering into anthropomorphism. (Avoiding anthropomorphizing was something my wonderful editor, Christy Cox, felt strongly about, and she was right.)

Q. Did JOURNEY receive any rejection letters? If so, how many (ballpark)?
A. My agent sent the book to a small selection of regional publishers, and I believe it was rejected—nicely, which I loved!—by two of them. Sasquatch contacted my agent very shortly after she submitted it and expressed interest. So I didn’t receive many rejections for this manuscript, but I want to state that I have received many dozens, maybe even hundreds, of rejections, in total, for all my of manuscripts, over the six or so years I’ve been submitting! And I still am. With Journey, it was a case of the right story getting to the right publisher at the right time. I’m very grateful.

Q. Describe your reaction when you received an offer on JOURNEY.
A. I spoke on the phone to the publisher, Gary Luke, at the very beginning of the negotiation process, before he even made an offer. (My agent set up the call.) At the end of our conversation, in which he discussed some potential edits, he said, “Well, I’m looking forward to publishing your book.” I hung up, then put my head down on my kitchen counter and cried. After countless rejections for other books, over the years, the relief and gratification was just immense.

Q. What kind of input did you have in choosing an illustrator for the book?
A. I did not have any input. In fact, that first time that I spoke to the publisher, he told me he already had an illustrator in mind. That was fine with me. It was my first book and I was in no situation to be demanding! Also, as it turned out, the illustrator, Robin James, was amazing and I couldn’t have chosen someone better suited if I’d had the chance.

Q. What jumped out at you when you saw the first sketches and jacket cover?
A. I couldn’t believe how beautiful the cover was! The wolf’s fur was so soft, I wanted to reach out and touch it. As for the inside art, I loved it all, especially the gorgeous landscapes. Robin did a really stunning spread of Crater Lake, and another of Mount Lassen. One thing that surprised me was the spot art. This is a new term for me, but apparently spot art refers (at least in this case) to small illustrations, often of a single object, that appear in a blank space in the spread. Robin included spot art of pancakes (for a diner setting), a wolf stuffie (adorable!), and a pile of thumb tacks (in the little girl’s bedroom, where she tracks the wolf’s progress on a bulletin board), among other things. Something about them--some cozy, solitary quality--just tugged at my heart, and I like what they add to the tone of the book.

Q. How long did JOURNEY take to be published—from the time you received an offer until it was printed?
A. The process was unusually fast, I believe: about 18 months. Initially it was going to be longer—it was first slated for spring 2017, before the publisher bumped it up to fall 2016. The reason is that this is a time-sensitive subject. We wanted to get the book out there as soon as possible, while Journey himself is still with us and on people’s minds. The whole team—including editor Christy Cox, illustrator Robin James, production editor Emma Reh, and publicist Nicole Banholzer—worked so hard.

Q. Is there anything you would change in the book today if you could reprint it? (Was there a part that you really loved but had to edit out? Or did you think of something later that you wanted to add?)
A. I would have liked to include more of the history of wolves in America in the story, but due to length and style concerns, we had to cut most of that out. It was a little heavy and didn’t fit with the tone and voice; we didn’t want very young readers to get bored. We did include it in the back matter, though.

Q. What is your #1 tip to those who want to write picture books?
A. Join a critique group! I’m in one in-person group, and correspond by email with another. Both are amazing and indispensable. You might think your manuscript is perfect to start with, but after getting it critiqued and revising it, it will be even more perfect! (My process is always something like this: I write something. I think it’s great. I send it to my critique partners. They tell me everything that’s wrong with it and how to fix it. I lick my wounds for a few hours or days. Then I take their advice and revise it. Repeat several times.) If you can’t find a critique group, take an online course and make some friends that way who might become critique partners with you. Join SCBWI, go to conferences, and read everything on Kidlit411. It’s very hard to succeed on your own without a community of people to share information and advice with.

As a nature girl and general fan of canines, I cannot wait to read Journey!! Looking forward to its release!

Two member of my immediate family are so taken with wolves. I look forward to sharing your book with them, but I'm keeping my copy!

Wolves are a favorite of mine...I think they've often gotten a bad rap. I can't wait to read this story, Emma...and the illustrations look just amazing!

I cannot wait to read your book. I love nature books in general but wolves especially. The artwork looks amazing too.

Thanks for the kind comments, everyone!