THERE WAS AN OLD DRAGON WHO SWALLOWED A KNIGHT 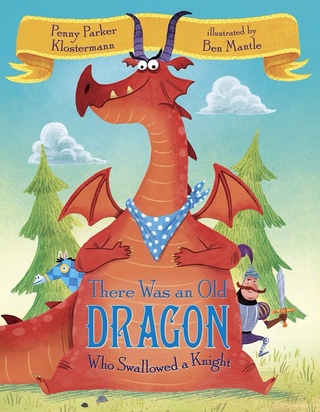 Q. Was THERE WAS AN OLD DRAGON WHO SWALLOWED A KNIGHT the first picture book manuscript that you ever wrote? If not, what was the first picture book you wrote and what happened to it?
A. It was not the first. If I checked my files correctly, it was the twelfth. The first one I wrote was titled THE IMAGINATION SITUATION. It is still sitting. I've revisited it a few times to see if I could find my way to revisions, but so far it's a no-go.

Q. What inspired THERE WAS AN OLD DRAGON WHO SWALLOWED A KNIGHT?
A few things.
A. First, I knew I wanted to do a retelling of THERE WAS AN OLD LADY WHO SWALLOWED A FLY. In fact, I just counted my ideas for a retelling in my list of PIBOIDMO (Picture Book Idea Month) ideas over the years and I have twenty-one different main characters that I thought might work for this book and none of the ideas say "dragon." But I still kind of count this as a PIBOIDMO idea, as the spark was there.
Second, for about two years I took pictures of clouds that took on familiar shapes. One evening I photographed one that looked just like a dragon and I thought what a great main character a dragon would make if I could just find a story for him.
Finally, one day I was determined to find a main character for my retelling and I visited Tara Lazar's list of 500+ Things Kids Like. There was dragon again. I started writing and the the rest is history.

Q. How did you pick the title of your book?
A. Once I had the first thing the dragon would swallow, it made sense for that to be my title.

Q. What is your favorite part of the book? And was that part in the first draft?
A. Probably the annoying steed galloping around at a terrible speed. In my first draft I had a horse that galloped and trotted around, of course. A member of my critique group suggested the steed since it fits with knights and castles. I was embarrassed that I'd missed that wonderful detail. Yay for critique groups!

Q. Why did you decide to tell the story in third person?
A. That was an easy decision because I mirrored the original.

Q. How much of the story did you know when you began writing THERE WAS AN OLD DRAGON WHO SWALLOWED A KNIGHT?
A. Only about fifty percent. My first draft was 274 words. The final text is 481 words.

Q. Did THERE WAS AN OLD DRAGON WHO SWALLOWED A KNIGHT receive any rejection letters? Yes. If so, how many (ballpark)?
A. Ten, counting submissions to both agents and editors.

Q. Describe your reaction when you received an offer on THERE WAS AN OLD DRAGON WHO SWALLOWED A KNIGHT.
A. Total excitement. And disbelief! Really this reaction was when my agent, Tricia Lawrence, let me know there was strong interest. But, my editor, Maria Modugno, wanted revisions. I think that's pretty typical for a first-time author. I imagine she wanted to see if I had it in me. Plus, my story was in rhyme so revisions can be tricky. After I came through, we got an official offer.

Q. What kind of input did you have in choosing an illustrator for the book?
A. Maria did ask if we had suggestions and we gave a few. Really, I didn't expect to be asked so I didn't have a strong feel. Then when Maria said her first choice was Ben Mantle and Tricia and I saw his work we were delighted.

Q. What jumped out at you when you saw the first sketches and jacket cover?
A. I loved how he captured the dragon's personality. And the color palette is perfection. Ben Mantle nailed the whole thing and added so much to the story.

Q. How long did THERE WAS AN OLD DRAGON WHO SWALLOWED A KNIGHT take to be published—from the time you received an offer until it was printed?
A. Just under two years.

Q. Is there anything you would change in the book today if you could reprint it? (Was there a part that you really loved but had to edit out? Or did you think of something later that you wanted to add?)
A. I wouldn't change a thing. I felt very lucky to have an editor who attended to every detail and was determined to make the book the best it could be.

Q. Can you share any funny or memorable parts of letters from kids about THERE WAS AN OLD DRAGON WHO SWALLOWED A KNIGHT?
A. The most memorable thing so far is a drawing of my dragon that was given to me by a 3rd grade girl. She drew it during my presentation at her school. I loved that she loved my dragon enough to draw him. And she did a fabulous job.

Q. When you do readings of THERE WAS AN OLD DRAGON WHO SWALLOWED A KNIGHT, which part of the book gets the best reaction?
A. Kids love the spread where the dragon is completely bloated and roars, "Okay . . . enough! I've had enough— More than enough of this swallowing stuff." The dragon is so fat that it's hard not to laugh. And, of course, the BURRRRRP! spread is a favorite, too.

Q. What is your #1 tip on writing picture books?
A. Join SCBWI. There are a lot of resources out there, but SCBWI led me to most of them. Sorry, I can't just stop with one :-) Remember that even though revision is hard, that's usually where the magic happens.
Read! Read! Read!
To learn more about Penny Parker Klostermann and her books, visit her website
Read More
2 Comments

Thanks so much for having me on your blog today, Karlin. It was fun answering your questions and thinking about my debut experience.

Hooray for Penny & her dragon :)!! It's such a rollicking read aloud!! thanks for sharing,Karlin!!