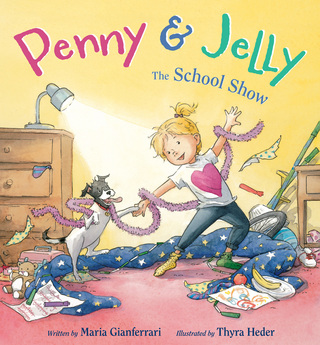 PENNY & JELLY: THE SCHOOL SHOW! By Maria Gianferrari and illustrated by Thyra Heder (Houghton Mifflin Harcourt, 2015)
Maria Gianferrari writes both fiction and nonfiction picture books from her sunny, book-lined study in northern Virginia, with dog, Becca as her muse. Maria has several books forthcoming, including a second to PENNY AND JELLY: The School Show, illustrated by Thyra Heder. Today she tells us how her first picture book was created.

Q. Was PENNY AND JELLY the first picture-book manuscript you ever wrote? If not, what was the first picture book that you wrote and what happened to it?
A. No, I believe my first was TERRIFIC TONGUES, which began as a poem. It’s a concept book about cool animal tongues which still retains some of its original poetic elements. It was acquired by Boyds Mills Press. They’re currently seeking an illustrator.

Q. What event or person inspired PENNY AND JELLY?
A. PENNY & JELLY was literally inspired when my daughter, Anya, who was around 5 at the time, began playing a harmonica, and our dog, Becca, joined in song. It was so funny, and adorable and sweet that I decided I must write about it. It was also very much inspired by Anya and Becca’s relationship: Anya’s an only child, and Becca is like her dog sister/playmate.

Q. How did you pick the title of your book?
A. The original title of the book was PENELOPE, UNTALENTED. However, because I received a two-book deal, we needed a title that could carry to the second book, so Penny & Jelly was born!

Q. What is your favorite part of PENNY AND JELLY? And was that part in the first draft?
A. I love the “Best Friend” ending. The story originally ended with the lines, “They were not in tune./But their duet had harmony.” Though I loved the feeling and humor in the lines, I knew it wasn’t quite finished yet. It took awhile, and then I finally had that “a-ha” moment, and the pieces came together in the ending.

I also love the cross-outs, my friend and critique partner Lisa Robinson’s idea. They’re the perfect accompaniment to Penny’s lists.

Q. How did you select the names for your characters?
A. Jelly was always Jelly—I just loved the sound of it. It’s funny-sounding, and it also felt like the kind of name a young kid might select for a dog. As I mentioned above, Penny was originally, Penelope. I liked the classic nature of the name, and again, it has some inherent humor. I love the rhythm of Penny & Jelly, and how they’re reminiscent of peanut butter and jelly, both in tone and in the idea that they’re complementary.

Q. Why did you decide to tell the story in third person?
A. I’m not really sure. I guess I wanted an overarching narrative voice, and it felt like it worked. It began in third person, and I didn’t veer from that during revision.

Q. How much of the story did you know when you began to write PENNY AND JELLY?
A. I knew that it was going to be a story about a bond between a girl and her canine BFF, but it took some time to come up with the talent show plot. After I figured that out, I wanted it be untraditional in terms of the talents, to be a story of creativity and resilience.

Q. Did PENNY AND JELLY receive any rejection letters? If so, how many (ballpark)?
A. Yes! I checked my records and it received eight rejections before it was acquired by the lovely and amazing, Cynthia Platt.

Q. Describe your reaction when you received an offer on this book.
A. Complete and total elation! I did a dance around the living room with Anya. Becca looked at us like we were crazy. A one book deal would have been fantastic on its own, but to have gotten a two-book debut deal was totally surreal.

Q. What kind of input did you have in choosing an illustrator for PENNY AND JELLY?
A. Cynthia was kind enough to show me some of Thyra’s early dog sketches and sketches of Penny, and I was in love! I could tell she was a dog lover like me. Her sketches had so much personality. I knew Cynthia had found just the right illustrator.

Q. What jumped out at you when you saw the first sketches and jacket cover?
A. I LOVED them! I was in total awe of the way that Thyra portrayed both Penny & Jelly with such tender humor and feeling, and how she added layers of visual playfulness to the text. There are so many cute details. I especially love Penny’s mismatched socks.

Q. How long did PENNY AND JELLY take to be published—from the time you received an offer until it was printed?
A. Cynthia is incredibly smart and extremely organized; Thyra delivered the art quickly, despite the fact that she was also busy with her debut, Fraidy Zoo. The offer came in February 2013, and it was released in July 2015, which is amazingly fast.

Q. Is there anything you would change in the book today if you could reprint it? (Was there a part that you really loved but had to edit out? Or did you think of something later that you wanted to add?)
A. No! I love it just the way it is!

Q. When you do readings of PENNY AND JELLY which part of the book gets the best reaction?
A. There are a few sections where people chuckle: the VOILÀ page (where Jelly is dressed up—who hasn’t done that with their dogs?). I think the magician part also gets a few laughs. The ending usually elicits more of an “Awww!” which is really nice.

Q. What is your #1 tip to those who want to write picture books?
A. Don’t give up! Even though picture books are short, they’re not easy to write. They often undergo multiple revisions and entirely change shape. It takes time to improve your craft. Keep reading; keep writing and join a critique group for feedback.

Thanks for having me here, Karlin! Congrats on your own debut, NADIA!

CONTEST CLOSED Win a copy of PENNY & JELLY: THE SCHOOL SHOW! (U.S. Residents only.) Leave a comment to enter. The winner will be announced on Monday, May 2. Read More
14 Comments

I love hearing the nuts and bolts of the process! Thanks, and congrats! It looks adorable.

Thank you so much for hosting me and featuring Penny & Jelly today, Karlin!!

Looking forward to celebrating your release of Nadia :)!

Congratulations on your new book! It sounds like a fun story. Love hearing the ins and outs of your publishing experience.

I always love hearing about the process authors/illustrators go through in creating their stories. So looking forward to this one!

Thanks again for having me, Karlin, and thank you to Emma, Susan, Rita and Pamela for commenting :)

This book sounds adorable, and I also love the rythmn of the names Penny and Jelly. It's always nice to hear what goes in to writing a book. Thanks for sharing.

Congratulations on your book. It looks like a fun story to read. Thanks for sharing your journey getting Penny & Jelly published.

Thanks for sharing your process --- truly appreciated. And, what an adorable book!

And thank you for your kind words too, Judy & Lynne Marie :)

Congratulations, can't wait to read it! Thanks for sharing behind the scene details on your process and your journey to publication.

Congrats Bnvoights--you are the winner of PENNY & JELLY! Contact me through my contact page for details! Thanks to everyone for their comments and interest!

I just love Penny & Jelly and am looking forward to the next one! Loved learning more about Maria and this fun book!
And I love the names...especially Penny. *wink*!