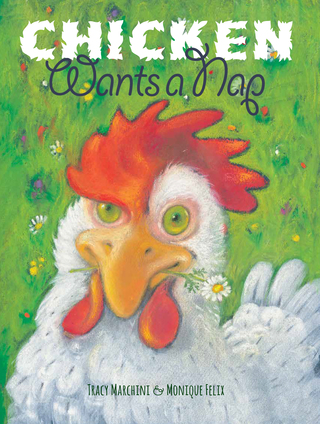 CHICKEN WANTS A NAP By Tracy Marchini and illustrated by Monique Felix (Creative Editions, August 2017)
Even though Tracy Marchini is a literary agent and YA and middle-grade author, she didn't play it cool when she got an offer on her debut picture book. Today she tells us how she created and celebrated her #firstpicturebook CHICKEN WANTS A NAP—coming August 15! (See Goodreads giveaway link below to win a copy!)

Q. What inspired CHICKEN WANTS A NAP?
A. At the time, I was a full time grad student who was working part time, and one of my assignments was to write about a character’s best or worst day. I was so exhausted and a nap sounded like the best thing in the world to me – so I wrote about a Chicken who also would love a nap, but was constantly interrupted.

Q. How did you pick the title of your book?
A. The title and the first line are the same, and they just kind of popped into my head as I was thinking about the assignment.

Q. Do you write by hand or on the computer?
A. I like to do both. If I’m stuck on something, I’ll write it out by hand. I always feel like I am a little more creative when I’m writing by hand first. There’s something about the feel of pen on paper, and it also gives me the opportunity to do a quick line edit as I enter it into the computer.

Q. How did you select the names for your characters?
A. Chicken is a chicken, and there was something about the naturally sparse text that seemed to fit with the simple name.

Q. Why did you decide to tell the story in first/third person?
A. Because the story deals with naps, it always felt natural in third. I think first person would have been too close, and would have changed the tone considerably.

Q. How much of the story did you know when you began writing CHICKEN WANTS A NAP?
A. I knew that I was tired, but the rest came to me as a wrote! I did know that I loved the structure of Remy Charlip’s Fortunately, so that was definitely something I was going for. Something about the original assignment (best or worst day) must have sparked that memory – and I think a lot of the humor comes from the back and forth of being successful… until the reader turns the page and Chicken is once more thwarted.

Q. Did CHICKEN WANTS A NAP receive any rejection letters? If so, how many (ballpark)?
A. So, this is completely unusual, but I only sent CHICKEN to one publisher that I had worked with in the past and knew would be a good fit. But most authors aren’t going to sell a book without at least one rejection for that manuscript, and I certainly have rejections from previous picture books.

Q. Describe your reaction when you received an offer on CHICKEN WANTS A NAP.
A. There was a lot of dancing, some annoying singing (“I sold a boooooook!”) and I think even a little bit of the running man. I was not chill about it – at all!

Q. What kind of input did you have in choosing an illustrator for the book?
A. No input, which is common. Luckily, I love Monique’s art in general and also what she did with CHICKEN WANTS A NAP in particular!

Q. What jumped out at you when you saw the first sketches and jacket cover?
A. “That’s one good lookin’ Chicken!”

Q. How long did CHICKEN WANTS A NAP take to be published—from the time you received an offer until it was printed?
A. About three months shy of two years from offer to publication.

Q. Was there a part that you really loved but had to edit out? Or did you think of something later that you wanted to add?
A. The text is only about 165 words, but my editor and I went back and forth on just the right wording for quite a bit. It wasn’t so much editing out something that I loved, but figuring out how to tighten the text so that it was even better!

Q. What is your #1 tip to those who want to write picture books?
A. Write and read as many of them as you can until picture book structure becomes an innate part of your craft. (Tip #2 would be to jot down a couple of picture ideas and then ask yourself with each idea, “How can I take this idea and flip it into something new/clever/funny/etc.?”)

Q. Do you have a favorite writing exercise or marketing tip that you can share?
A. If you’re stuck, change your scenery. Take a walk, go to your library, or make something with your hands (knit, sew, color – something!) Let your subconscious do some work on the problem and come back to the manuscript fresh.

Q. What are you working on now?
A. Right now I have a couple of picture book ideas that I’m revising and one that I’m drafting. There aren’t any chickens in these manuscripts… yet. (There is a duck though!)

Tracy, I love your inspiration for this book. I can totally relate! Thank you for sharing this interview, Karlin!