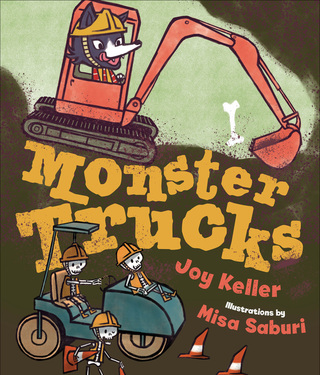 MONSTER TRUCKS by Joy Keller and illustrated by Miss Saburi (Henry Holt, August 2017)
On Joy Keller's website, she writes that her weirdest experience was "getting chased down the street by an angry pig." Sounds like a great picture book! Until that happens, read the story behind her #firstpicturebook MONSTER TRUCKS (available August 29!):

Q. Was MONSTER TRUCKS the first picture book manuscript you ever wrote? If not, what was the first picture book you wrote and what happened to it?
A. I’ve written lots of picture books over the years, and MONSTER TRUCKS wasn’t my first. My very first was about a cooking dragon. It stunk, and my critique group wasn’t afraid to let me know (in much gentler terms, of course). It was the first of many learning opportunities on my writing journey! I think I still have the original manuscript hand-written in a notebook.

Q. How did you pick the title of your book?
A. In this case, the title came first. It was the easiest part.

Q. What is your favorite part of the book? And was that part in the first draft?
A. I don’t know if I can pick a favorite. It was too much fun writing about each monster! And all the monsters in the book were in the first outline I wrote except for the mummies. They came later because, as my agent at the time said, the story just needed some mummies.

Q. How did you decide between telling the story in first or third person?
A. The whole book is basically a list poem, so this wasn’t an issue for me to even consider.

Q. How much of the story did you know when you began writing MONSTER TRUCKS?
A. All of it! I had the idea, but the big challenge was making that idea into a fun, playful rhyme. There were nights where my brain wouldn’t shut off as I lay in bed wondering, “What rhymes with debris?” or “Why couldn’t Minotaur have one more syllable?”

Q. Did MONSTER TRUCKS receive any rejection letters? If so, how many (ballpark)?
A. Of course! I would say at least twenty, maybe more.

Q. Describe your reaction when you received an offer on MONSTER TRUCKS.
A. I won’t lie. There was a lot of jumping up and down and cheering.

Q. What kind of input did you have in choosing an illustrator for the book?
A. None at all, which is why I was absolutely thrilled when I saw Misa Saburi’s adorable illustrations. She can make anything (even monsters!) look cute.

Q. What jumped out at you when you saw the first sketches and jacket cover?
A. Everything—I love Misa’s style. Let’s just say that the picture of the witch driving the street sweeper made me the happiest author in the world!

Q. How long did MONSTER TRUCKS take to be published—from the time you received an offer until it was printed?
A. It took almost three years. Publishing is a slow process, but the end result is totally worth it.

Q. What is your #1 tip to those who want to write picture books?
A. Write. A LOT. I think of my picture book manuscripts as baby sea turtles. They aren’t all going to make it—that’s the sad reality of the business—but I can always have more manuscripts that might work the next time around. So stay busy!

Now I know I’m breaking the rules here, but I’d say my #1 ½ tip is to join a critique group. You need writing friends to help solve those pesky manuscript problems that you just can’t solve yourself. (Then you’ll also have a group to help you celebrate when your book gets published!)

Q. What are you working on now?
A. I tend to work on multiple things at one time. I have a nearly wordless book for which I’m creating a dummy, a comic-book style science book, and another fun rhyming story.
Q. Where can people find you? (Website, Twitter, Facebook, etc.)
A. My website is joykellerauthor.com, and you can find me on Twitter @jrkeller80.
Read More
Be the first to comment
Loading…}