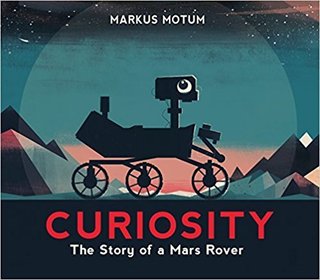 Curiosity by Markus Motum (Walker Books, 2018)
While doing research for his #firstpicturebook, Markus Motum visited the NASA’s Twitter account for the Mars Rover which was written in first person. Markus knew that element would help the reader connect with the robot’s story so he followed the rover’s lead in CURIOSITY —“a fascinating page turner” (New York Journal of Books) and an “engaging children’s book debut” (Publishers Weekly, starred review).

Q. What inspired CURIOSITY?
A. The true story of Curiosity—a rover the size of a 1 tonne car, successfully making its way to Mars, attempting a never before done landing—to me was stranger, or rather, more wonderful then fiction. On the one hand it was a great scientific based story, but on the other I just saw this amazing story with a rover people seemed to care about on a personal level.

Q. How did you pick the title of your book?
A. The name of the rover was such a perfect fit for the title of the book. The book shows where your curiosity can take you. Clara Ma won a NASA competition to name the rover, and part of her submitted essay for the competition is used to close out the book itself.

Q. Do you write by hand or on the computer?
A. I'll start by hand, as ideas or sentences come to me I'll want to get them down immediately, for me there's no more instant method than pen to paper. Notes or paragraphs will be jotted all around my sketchbooks. As the project progresses and I need something resembling a coherent story, I need the computer to help!

Q. What is your favorite part of the book? And was that part in the first draft?
A. I always liked the last few spreads, which take place after the rover has finished telling us about her journey. The story beats haven't changed since my original idea. I also had to change the colour of the Martian sky for one spread, as the colours I had chosen didn't match up to the time of day it would have been when Curiosity landed on local Martian time! I really liked the new colours and how it turned out.

Q. What kind of resources did you use in your research for this story?
A. I used a number of books, including the Haynes Owner's Workshop manual which featured previous rovers like Spirit and Opportunity, as well as Curiosity. NASA is great at putting out content whether it be written or videos, so I had a great library of resources from things they just make public. Finally to make sure the book held up to factual and scientific scrutiny, Walker brought on a Mars expert, Stuart Atkinson, who brought some great insight to the project and was great at making sure the text (and pictures!) were kept accurate.

Q. Why did you decide to tell the story in first person?
A. In the very early days, when I was still approaching how I might tackle the book and story, I visited the rovers official Twitter account, and saw that the rover tweets in the 1st person. “My launch was a total success!” or “I’m making final preparations for my landing...wish me luck.” It created an immediate connection for audiences with this rover. It anthropomorphized the rover beautifully, and I knew having the rover talk directly to the readers could help in getting them engaged. I didn't want this to be a dry science lesson. By the end I wanted readers to really care about this rover and its amazing journey, and hopefully having it in the 1st person helped achieve this.

Q. Did you write the story first, then illustrate it? Or did the images appear before the words?
A. The story was only very loosely planned out before the images I wanted in there started popping into my head, from there they would appear in tandem.

Q. Did CURIOSITY receive any rejection letters? If so, how many (ballpark)?
A. I made a list of dream publishers I would love to be published by, and was going to work my way down the list, sending my only copy of the book to each in turn. That was the plan, but Walker Books, at the top of the list, asked me to come have a meeting with them. Needless to say I was rather caught off guard!

Q. Describe your reaction when you received an offer on CURIOSITY.
A. I tried to remain as calm as possible — I didn't want to risk counting my chickens before they had hatched. Needless to say my parents reaction more then made up for my seemingly calm one!

Q. How long did CURIOSITY take to be published—from the time you received an offer until it was printed?
A. It took a little over year, which was spent making many iterations and changes to the one I had originally pitched to Walker. Some of this was narrative based, to help the book and story flow better, and some of this was changing illustrations based on Stuart's Mars knowledge.

Q. Was there a part that you really loved but had to edit out? Or did you think of something later that you wanted to add?
A. Towards the end of the book there was an additional spread of the rover with no text which I really wanted to keep, but we had too many pages so the spread had to go. There was so much to cover in the book, there was nowhere else we could take pages out!

Q. What is your #1 tip to those who want to write picture books?
A. Spend time working on your idea/story. Once you've got your foundations established, everything else will fall into place that much easier.

Q. Do you have a favorite writing exercise or marketing tip that you can share?
A. It’s not a very original one, but always have your pen and sketchbook/paper to hand wherever you go. You can guarantee inspiration or an idea is going to come to you when you least expect, not when when you need it the most!

Q. What are you working on now?
A. I'm currently working on a book cover for a novel by Walker Books— producing artwork for someone else's writing is a first for me, and solidifying ideas for the difficult second album, or rather picture book!