Tags: Tara Lazar, Tracy Marchini, Marie Lamba, Rebecca Grabill, Josh Funk, Sylvia Liu, Chana Stiefel, Lauri Fortino, Jami Gigot, Deborah Freedman, Katey Howes
Santa’s not the only one who likes a good list. Below are links to lists from 11 picture-book authors—from “500 Things That Kids Like” and “7 Steps to Writing Success” to “18 Ideas for a Successful Book Launch” and “10 Reason’s I’m Thankful for Children’s Books”. I’m grateful that these writers have contributed to my Q&A blog (click on author’s name above to read their #firstpicturebook interview) and that the KidLit community is so generous with their advice and support. Happy Writing and Happy Holidays! See you in 2018!

Rebecca Grabill’s How to Promote Your First Picture Book

Chana Steifel’s 5 Writing Lessons I Learned from an Ironwoman

Deborah Freedman’s Resources for Writers and Illustrators of Picture Books

Thanks so much for including me (and my humble blog) in your post, alongside such fabulous kidlit authors! And congratulations on your forthcoming books! So awesome! :) 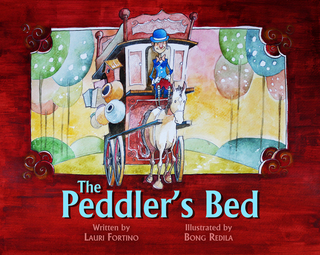 THE PEDDLER'S BED by Lauri Fortino and illustrated by Bong Redila (Ripple Grove Press, 2015)
Library Assistant Lauri Fortino is a strong supporter of library and literacy initiatives and the creator of Frog On A Blog, a forum for writers and fans of children’s picture books to share their views on all-things picture books. But today she shares the story of how she created her first picture book, THE PEDDLER'S BED—"a quirky little tale that expresses the core message of kindness and hospitality, sharing what you have with others, no matter how humble or how fine" (Midwest Book Review).

Q. What inspired THE PEDDLER'S BED?
A. My inspiration for THE PEDDLER’S BED came from a sense of gratitude I felt toward family and friends for their generosity. When my husband and I first got married, much of our furniture was given to us, including our bed. The story is all about kindness and generosity and I really feel the world could use more of both.

Q. How did you pick the title of your book?
A. The title just came to me when I knew the story was going to be about a peddler who tries to sell a bed. The title for The peddler’s bed never changed.

Q. What is your favorite part of the book? And was that part in the first draft?
A. My favorite part is the little man’s dog Happy. He was in the story from the beginning. I’m pretty sure my dog influenced my decision to include a canine companion in the book.

Q. Why did you decide to tell the story in third person?
A. At the time, I was writing all of my stories in third person and hadn’t considered anything else. I’ve become more comfortable experimenting with different points of view now. I’m even working on a story that breaks the fourth wall.

Q. How much of the story did you know when you began writing THE PEDDLER'S BED?
A. I had a rough idea of what the story was about, how it would begin, and how I wanted it to end. But my plot was disjointed. I had to work on connecting the dots from beginning to end in a way that made sense.

Q. Did THE PEDDLER'S BED receive any rejection letters? If so, how many (ballpark)?
A. Before sending the manuscript to Ripple Grove Press, I had sent it out only twice, and received back two rejections.

Q. Describe your reaction when you received an offer on THE PEDDLER'S BED.
A. There was a message on my answering machine when I arrived home from work (I work at my local public library) from Rob Broder, president and founder of Ripple Grove Press, saying he’s interested in THE PEDDLER’S BED and to call him to discuss a possible contract. Well, I must have replayed the message at least four or five times to be sure I was hearing correctly. Needless to say, I was thrilled!

Q. What kind of input did you have in choosing an illustrator for the book?
A. Rob and I discussed illustration style and he asked me to name a few books with styles that I thought were a good fit for the story. We seemed to be in agreement about what direction to take the art. Then Rob contacted Bong Redila to see if he’d be interested in illustrating the book. I’m super pleased with Bong’s illustrations. They’re so colorful and unique.

Q. What jumped out at you when you saw the first sketches and jacket cover?
A. The first thing that jumped out at me was that the peddler’s cart looked very different from what I had envisioned. But that was perfectly okay. I loved the sketches! It’s fascinating to see how an illustrator takes your words and ideas and brings them to life.

Q. How long did THE PEDDLER'S BED take to be published—from the time you received an offer until it was printed?
A. I signed the contract October 31, 2013 and the publication date was September 1, 2015, so nearly two years. But I received my author copies in April of 2015.

Q. Is there anything you would change in the book today if you could reprint it? (Was there a part that you really loved but had to edit out? Or did you think of something later that you wanted to add?)
A. I’m sure there’d be a lot of things I’d change if I picked it apart, but I try not to do that. As writers, our inner editors are always talking, making us believe what we’ve written isn’t ready, finished, or good enough. Sometimes you just have to put him/her on mute and let it go.

Q. Can you share any funny or memorable parts of letters from kids about THE PEDDLER'S BED?
A. This isn’t from letters, but from talking to the kids about the book after I’ve read it. The book ends with the little man asleep on the bed on his front porch. I like to ask the kids how they think the little man will get the bed inside the house. One child said he’d prop open the roof and lower it down. You can’t beat the ingenuity of kids.

Q. When you do readings of THE PEDDLER'S BED which part of the book gets the best reaction?
A. What gets the best reaction actually happens before I read the book. Because there is a dog in the story, I like to share a picture of my dog with the kids. I show them a blown up picture of my dog with crazy, static-zapped, fly-away hair and tell the kids he was having a bad hair day. They love it!

Q. What is your #1 tip to those who want to write picture books?
A. Read bunches of picture books, especially new ones! Go to the library and raid their New Picture Book shelves. If you want to get published the traditional way, it’s important to really get a feel for the format and a clearer picture of what publishers are publishing and what’s selling in the current market. That said, don’t try to copy what others have done. Create something new. Write the stories that only you can write.

Q. What are you working on now?
A. I’m working on several picture book manuscripts as well as a children’s chapter book. My goal this year is to find a literary agent to represent my work.
To learn more about Lauri, visit her website
Read More
3 Comments

This sounds lovely!! Looking forward to reading it! Congrats, Lauri!

Loved this interview! Lauri, Congrats and much continued success.

I enjoyed sharing my experience with you and your readers. Thanks, Karlin! :)