LUNA AND THE MOON RABBIT 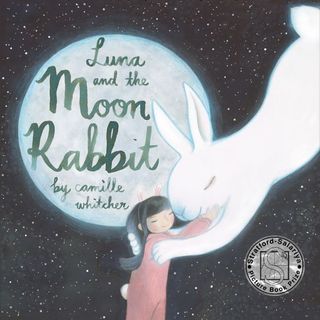 LUNA AND THE MOON RABBIT By Camille Whitcher (Salariya Book Company, 2018)
The Stratford-Salariya Picture Book Prize is a competition held by the Stratford-upon-Avon Literary Festival and Salariya Book Company to find a picture book by an unpublished author deserving of publication. In 2017, Camille Whitcher won and now her #firstpicturebook has been published in the U.K. and will be available in the U.S. this August. Congrats Camille!

Q. What inspired LUNA AND THE MOON RABBIT?
A. I’m a big fan of folk tales, fairy tales and myths and wanted to do something based on one. I’m also a big fan of rabbits, though unfortunately I’ve never owned one. Having lived in Japan for a while, and of course having a Japanese parent, I’d known about the East Asian myth of the rabbit on the moon. I thought it was the perfect basis to create the story.

Q. How did you pick the title of your book?
A. Initially it was simply “The Moon Rabbit”. However, there were one or two other books with the same or similar titles so then it was decided that the girl’s name should appear in the title.

Q. Do you write by hand or on the computer?
A. I would have to say both. I probably start off with handwritten notes, usually on scraps of paper — I particularly seem to like used envelopes to doodle/scrawl on! I then take these scraps and type them up into chunks on the computer and start trying to make sense of them from there.

Q. What is your favorite part of the book? And was that part in the first draft?
A. I think my favourite part is the image where the two characters are lying beside the river watching the koi and it certainly was in the first draft. I had been experimenting with different media initially and found an old bottle of Quink that I’d bought years ago. I thought it’d be appropriate to use for a book set at night time. I’d found out from somewhere that it reacts to bleach well so I experimented painting koi in bleach on slightly diluted washes of Quink. I liked the outcome so made sure the koi were in the book.

Q. How did you select the names for your characters?
A. I chose the name Luna not only because it means moon in English or Latin based languages but also because it exists in Japan as a girl’s name (spelled Runa when Romanised). It’s often written using the kanji for moon - the first character meaning moon.

Q. Why did you decide to tell the story third person?
A. I don’t think it was a particularly conscious decision to do so. I think I naturally write in the third person unless I am specifically writing a story about me. Having said that, it’s probably obvious that the way I’ve designed Luna shows that this story is my own wish fulfillment!

Q. How much of the story did you know when you began writing LUNA AND THE MOON RABBIT?
A. The myth that Luna and the Moon Rabbit is based on is quite well known in East Asian countries. I knew that there was a rabbit as opposed to a man on the moon and that he is seen pounding rice for mochi in the Japanese version of the myth. I didn’t know too much more than that until later on. There seem to be a couple of versions of how the rabbit ended up there. Both interesting, though I didn’t want to illustrate an existing story, I wanted to make it my own.

Q. Did you write the story first, then illustrate it? Or did the images appear before the words?
A. The images definitely came first. In fact it was almost finished before the final draft of the text was written. I think predominantly in images and the atmosphere I want to convey. I find it more difficult to convey moods with words without cringing at what I’ve written!

Q. Did LUNA AND THE MOON RABBIT receive any rejection letters? If so, how many (ballpark)?
A. To be honest before entering the book into the Stratford Literary Festival-Salariya Picture Book Prize I didn’t send it off to any other publishers as I was too afraid of rejection! I’d shown the dummy version of the book at my Graduate Degree Show and from there I had significant interest from one publisher, but after one meeting nothing came of it. I found entering the book into a competition somehow easier than sending it off to publishers.

Q. Describe your reaction when you received an offer on LUNA AND THE MOON RABBIT.
A. When I won the picture book prize, and as a result a contract, I was pretty stunned. That feeling took a long time to dissipate too. I kept thinking they must’ve made a mistake and it was only a matter of time before they’d call me to retract the prize!

Q. How long did LUNA AND THE MOON RABBIT take to be published—from the time you received an offer until it was printed?
A. It was a little over a year. However, to get it to the stage where I was ready to submit the dummy for the competition took much much longer!

Q. Was there a part that you really loved but had to edit out? Or did you think of something later that you wanted to add?
A. There wasn’t anything edited out. As for things that could’ve been added, there are probably many! But then I guess those ideas are for another story. There’s nothing that I regret not including.

Q. Have you read LUNA AND THE MOON RABBIT to kids? If so, which part of the book gets the best reaction?
A. I have read it to kids at a workshop. At the first reading, they were all so quiet and I was so nervous (!) that I didn’t really pick up on any particular reactions. However, on the second reading to them at the end of the workshop, I made it more interactive and they seemed to enjoy spying all the hidden rabbits in the images.

Q. Did you create any book swag for LUNA AND THE MOON RABBIT? If so, what kind?
A. I have had a few postcards printed up — some of which were made from previous artwork which I then redid for the book. I don’t know if it counts as ‘swag’ exactly but I also hand carved rubber stamps to use at signings. I know some illustrators like to do a little doodle when signing but I have such a fear of messing it up I thought a stamp would be better.

Q. What is your #1 tip for picture-book writers?
A. I guess what’s been invaluable to me is my picture book maker friends. I have a few very close friends that I made whilst doing my master’s in children’s book illustration and I rely on them to give me honest and constructive feedback on both my illustrations and my writing. However, the latter is much harder for me to share as I’m much less confident with it.

Q. Do you have a favorite writing exercise or marketing tip that you can share?
A. I don’t think I’m qualified to give tips on writing exactly - or even on marketing for that matter! One thing I do, as I have a terrible memory, is make sure I have access to a pen and paper, or something I can take notes on quickly. Ideas can pop up and then disappear quite quickly so I need to make a note of them. A lot of them don’t make much sense to me later but some of them do and are worth developing. It’s the same with illustrating. I don’t create beautiful instagram worthy sketchbooks. Instead, I use sketchbooks as a safe place (I hardly ever show anyone!) where I can doodle, sketch and generally dump my ideas. When my ideas start to dry up, I go back to these sketchbooks and usually find an old forgotten doodle that sparks my imagination.

Q. What are you working on now?
A. I have several ideas on the go, some more developed than others. I need to get them to a point where they’re ready to be submitted to publishers - I also need to get myself ready and confident enough to submit them!