Tags: #firstpicturebook, KHALIDA AND THE MOST BEAUTIFUL SONG, Lovely Beasts: The Surprising Truth, ODE TO AN ONION, PAUL AND HIS UKULELE, #bookreviews 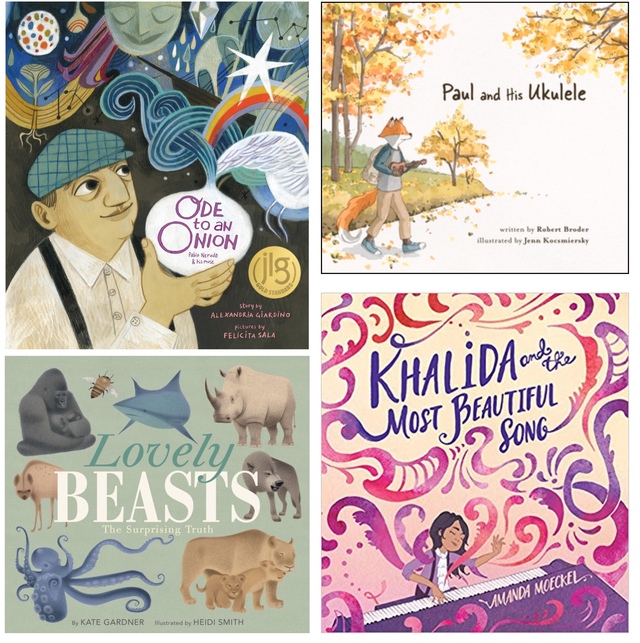 There are many ways to support debut authors, such as writing online book reviews. More reviews = more visibility. But authors can feel awkward asking you to do that. So, inspired by Debbie Ridpath Ohi’s popular blog post, I will ask for them. Have you read these #firstpicturebooks? If so, what are your thoughts? C’mon—add some stars to a book’s life! (And I’ve made it SUPER easy for you by including direct book links to GoodReads, Amazon, and B&N!)

Paul and His Ukulele

Ode to An Onion

Khalida and the Most Beautiful Song

KHALIDA AND THE MOST BEAUTIFUL SONG 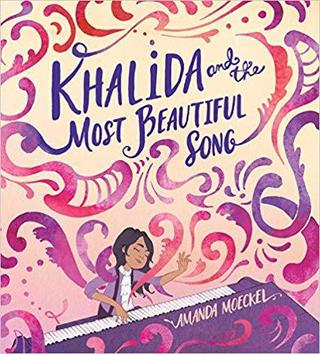 KHALIDA AND THE MOST BEAUTIFUL SONG By Amanda Moeckel (PageStreet Kids, 2018)
Artist Amanda Moeckel believes in the power of dreams and daydreaming. Her #firstpicturebook appeared to her in her sleep. Now KHALIDA AND THE MOST BEAUTIFUL SONG is available in bookstores and listed on @MatthewWinner’s September 2018 list of “seriously outstanding books.” Read Amanda’s Q&A to learn how she turned her dream into her debut.

Q. Was KHALIDA AND THE MOST BEAUTIFUL SONG the first picture book manuscript you ever wrote? If not, what was the first picture book you wrote and what happened to it?
A. It’s not. I had written a handful before this one. The first one was called Little Heart, and it’s about a girl who finds a series of posthumous signs that her grandmother is still with her. That’s still sitting on my shelf, fully illustrated, but I have been told by various people in publishing that I should wait until my third or fourth book to tackle death.

Q. What inspired KHALIDA AND THE MOST BEAUTIFUL SONG?
A. The idea for this story came to me in the same way the song comes to Khalida. I was half-asleep, and the story downloaded into my head, almost fully formed. I had gone to bed with a prayer every night for about three weeks, that a story would come to me in my dreams— one that was for only me to tell. I saw a few of the major scenes and the full plot, although the character was a boy.

Q. How did you pick the title of your book?
A. The marketing team at Page Street Kids decided to include Khalida’s name, but it was originally called The Most Beautiful Song. Actually, the first draft was called Magnum Opus, and I really liked that, but the first draft also included Khalida touring with her beautiful song and building a career on it. Thank goodness for professional editing.

Q. Do you write by hand or on the computer?
A. Both. I usually start by hand in a sketchbook with a series of words and rough sketches, then I write a draft on the computer. Sometimes I’ll start with notes on my phone if I’m out and about when an idea comes.

Q. What is your favorite part of the book? And was that part in the first draft?
A. My favorite spread is when Khalida plays in front of a crowd. I also like when she sneaks to the piano at night. Both were in the first vision I had of the story.

Q. How did you select the names for your characters?
A. In that first vision I received of the story, I heard the name of the character, which sounded like “Kel-” something. When I found the name “Khalida” which is an Arabic name meaning “immortal,” it was perfect. A good song lives forever.

Q. What made you decide to tell the story in first, second, or third person?
A. Third person felt most natural. I’ve also heard in writing classes that it’s the easiest to get published.

Q. How much of the story did you know when you began writing KHALIDA AND THE MOST BEAUTIFUL SONG?
A. I knew it all, but also knew a lot of extraneous information. So instead of trying to figure out where the story was going to go, it was more of an editing process.

Q. Did you write the story first, then illustrate it? Or did the images appear before the words?
A. The images came first. They usually do for me.

Q. Did KHALIDA AND THE MOST BEAUTIFUL SONG receive any rejection letters? If so, how many (ballpark)?
A. Yes, one. I am unagented, so when it was time to show this story to publishers, I had to find the opportunities myself to get it in front of them. I did this solely through SCBWI. I had an opportunity to submit to Elizabeth Bicknell at Candlewick after a conference, and she graciously rejected it with helpful feedback. The funny thing is, Kristen Nobles who eventually loved it, worked alongside Elizabeth as Art Director at Candlewick for many years, even during the time in which I submitted. It just goes to show you that two people at the same house can feel vastly different about a story. I met Kristen the following year at SCBWI, and gave her my postcard. She looked at my website, asked if I had stories to go along with some images, and the rest is history.

Q. Describe your reaction when you received an offer on KHALIDA AND THE MOST BEAUTIFUL SONG.
A. Utter joy! Then stage fright. Then calm relief that I’d be finally making a published book.

Q. How long did KHALIDA AND THE MOST BEAUTIFUL SONG take to be published—from the time you received an offer until it was printed?
A. My timeline was six months.

Q. Was there a part that you really loved but had to edit out? Or did you think of something later that you wanted to add?
A. There was a spread in the end where the song was coming from all the homes in the town. It looked similar to the first spread, but instead of the ghostly song swirling toward one window, it was colorful, coming out of many windows. We moved it to the endpapers, then cut it out altogether. I was okay with editing it out, even though I loved the visual. I think the book is stronger with the current ending.

Q. Have you read KHALIDA AND THE MOST BEAUTIFUL SONG to kids? If so, which part of the book gets the best reaction?
A. Yes! Good question. There seems to be an air of satisfaction in the room at the ending. Almost a sigh. It’s a quiet book, so there isn’t a lot of laughing. I am inspired to bring more humor into my next book. Not because I’m unhappy with this one, but because now I have a son and making him laugh is my new addiction. I totally get now why parents want funny books for their kids.

Q. Did you create any book swag for KHALIDA AND THE MOST BEAUTIFUL SONG? If so, what kind?
A. I made a coloring sheet!

Q. What is your #1 tip for picture-book writers?
A. Read and read and read and read. Then read some more. Picture books, that is. Go to the library and take home a stack of books over and over again. My library has a request shelf, as I’m sure most do… so I research online, request the books I want to read, then go pick them up. It takes no time at all, and I LOVE coming home with a new stack of books every week.

Q. Do you have a favorite writing exercise or marketing tip that you can share?
A. I like to transcribe other published picture books. Writing the manuscript first is important. For those of us who are author-illustrators, this might not seem intuitive. It’s really hard to envision the story on one page, if you’re used to creating page turns. But publishers want manuscripts. So I go to the library, take home a stack of books, and whichever ones feel similar to my story— whether in tone, pacing, subject matter, whatever— I transcribe them. I have a folder on my laptop of transcriptions of other peoples’s stories. When I’m sitting down to write, I might read through a few of them before I begin, so I can get into the rhythm of writing a picture book on one blank page, single-spaced. That has really changed how I write.

Q. What are you working on now?
A. My next submission!

If you have read KHALIDA AND THE MOST BEAUTIFUL SONG, please consider writing a review:
Amazon
GoodReads