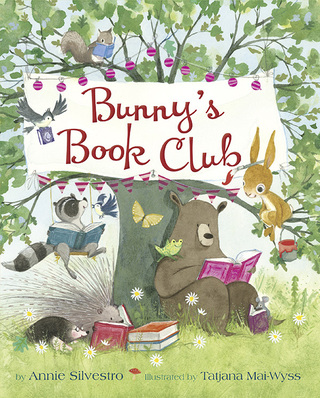 BUNNY'S BOOK CLUB by Annie Silvestro and illustrated by Tatjana Mai-Wyss (Doubleday Books for Young Readers, February 7, 2017)
Annie Silvestro has worked as a magazine editor, convention consultant, and mother. And on February 7th, all of her hard work on her first picture book will pay off when it is displayed in bookstores. Inspired by her costume in a preschool show, BUNNY'S BOOK CLUB is "a love letter to the pleasures of reading and libraries" (School Library Journal)

Q. Was BUNNY'S BOOK CLUB the first picture book manuscript you ever wrote? If not, what was the first picture book you wrote and what happened to it?
A. I had written many stories before Bunny. The very first was called LANCE THE LION, about a very vain but lonely lion who opens a hair salon in his cave. The story is locked away in a very deep drawer – I laugh about it now, but it will always have a place in my heart because it’s the idea that got me started as a writer.

Q. What inspired BUNNY'S BOOK CLUB?
A. Every year at the preschool my kids attended, the parents put on a show for the students. My first year in the show, I had a part as a bunny. I looked so ridiculous in my full-on bunny costume, I started brainstorming crazy things a bunny would do. One of those ideas planted the seed for BUNNY’S BOOK CLUB.

Q. How did you pick the title of your book?
A. My fantastic editor at Doubleday Books for Young Readers, Frances Gilbert, suggested the title after we went through a few rounds of edits and the original title no longer fit.

Q. How did you decide between telling the story in first or third person?
A. I generally feel more comfortable writing in the third person – though I hope to spread my wings one of these days!

Q. How much of the story did you know when you began writing BUNNY'S BOOK CLUB?
A. The theme of the story and Bunny’s love of books were always central. I knew how the story was going to end up, but the “how” changed quite a bit over the course of many revisions.

Q. Did BUNNY'S BOOK CLUB receive any rejection letters? If so, how many (ballpark)?
A. Yes! I had a good number of rejections. I am grateful that my amazing agent, Liza Voges, saw its potential and that my editor was willing to take a chance on it!

Q. Describe your reaction when you received an offer on BUNNY'S BOOK CLUB.
A. Screaming. Lots and lots of happy screaming! I was in the car on a road trip with my family. I may have frightened my children (briefly).

Q. What kind of input did you have in choosing an illustrator for the book?
A. The team at Doubleday chose Tatjana Mai-Wyss and I was over-the-moon when I heard. I am in love with her beautiful and charming illustrations!

Q. What jumped out at you when you saw the first sketches and jacket cover?
A. I was beyond thrilled. Bunny and his friends are so adorable and each has his or her own unique personality. The porcupine hugging the book absolutely steals my heart. I adore the final spread and the cover is so bright and happy, it makes me smile every time I see it.

Q. How long did BUNNY'S BOOK CLUB take to be published—from the time you received an offer until it was printed?
A. Three years.

Q. What is your #1 tip to those who want to write picture books?
A. Join the SCBWI! I owe so much to this incredible organization – I can’t say enough positive things about it. Otherwise, read as much as you can and write as much as you can.

Q. Do you have a favorite writing exercise that you can share?
A. My favorite and most necessary exercise is reading a story out loud so I can really hear the areas that are working and the ones that are not.

Q. What are you working on now?
A. I have a few picture books ideas that I’m working through, and I’m also tackling a chapter book which I’m really excited about. 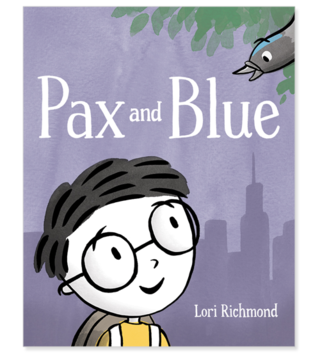 PAX AND BLUE by Lori Richmond (Simon & Schuster/Paula Wiseman Books, February 7, 2017)
Lori Richmond is a Brooklyn-based children's illustrator, creative director, and designer. And on February 7th, she will add "author" to that list when PAX AND BLUE—a picture book she wrote and illustrated—is published by Paula Wiseman Books. "Nicely pitched to young readers' empathies" (Kirkus Reviews), PAX AND BLUE "speaks volumes about being a good friend" (Publishers Weekly). Thank you Lori for sharing your #firstpicturebook story:

Q. What inspired PAX AND BLUE?
A. My younger son told me a true story about a pigeon who got lost on a subway train. We live in New York City, so subway rides are part of our daily life. It is quite funny to think of a pigeon commuting on the subway, but I was really touched by how my son was concerned that the bird may be scared. Pigeons are not the most revered urban animals, but, to a child, he was just a little bird that needed help.

Q. How did you pick the title of your book?
A. The original title was PAX AND THE PIGEON. I love alliteration. But after chatting with my editor, we decided that PAX AND BLUE was friendlier and introduced both characters sooner.

Q. What is your favorite part of the book? And was that part in the first draft?
A. I love the sequence when Blue the pigeon follows Pax down the stairs all the way on to the train— this is pretty much intact from the original dummy.

Q. How did you select the names for your characters?
A. Again, the alliteration… I knew I wanted a “P” name for the boy, since I was going to pair it with the word “Pigeon” in the original title. I searched baby name lists to get ideas, and loved how Pax meant “peace,” since the character is so thoughtful, empathic, and solves this really chaotic problem for everyone. And Blue has some bright blue feathers on his body!

Q. Did you write the story first, then illustrate it? Or did the images appear before the words?
A. I write first and then illustrate. In that process, words begin to get cut as the pictures begin to do the talking. Original drafts of PAX AND BLUE had a lot more words than wound up in the final book.

Q. Why did you use a very limited color palette?
A. LYLE, LYLE, CROCODILE is my favorite classic city story, and his bright green color stands out so boldly in every illustration. This look had a huge influence on me when working on PAX AND BLUE. Because it is a friendship story, I wanted to put all the attention on the main friends and visually push back everything else in the busy city. The background people and environments blend together in the same monochromatic purplish-gray, while Pax and Blue are rendered to stand out in bright colors with a strong, bold line.

Q. How much of the story did you know when you began writing PAX AND BLUE?
A. Since the story was based on a real situation, I had a pretty good base — but I still needed to establish an authentic friendship between Pax and Blue. I learned that it’s not really about creating plot points to move things along — it is about making sure the action in the story allows an emotional connection to happen between the characters, and, in turn, with the reader. That is what makes a story work.

Q. Did PAX AND BLUE receive any rejection letters? If so, how many (ballpark)?
A. This was not a typical submission. I did a workshop at Highlights Foundation and my instructor saw promise in my work and passed samples along to a few editors. I was surprised to be contacted by Paula Wiseman, and she asked if I had any completed dummies. I sent PAX AND BLUE to her, and then we met in person a few weeks later. At that meeting, Paula told me she was interested in publishing it!

Q. Describe your reaction when you received an offer on PAX AND BLUE.
A. Total freakout in the calmest and most professional way possible, because I didn’t believe it was real!

Q. How long did PAX AND BLUE take to be published—from the time you received an offer until it was printed?
A. The story was sold in 2014, and the pub date is February 7, 2017.

Q. What is your #1 tip to those who want to write picture books?
A. Join SCBWI for the wonderful learning resources and community! And read picture books. Lots of them. Ask yourself why you like certain books. Analyze how the book is paced. How is the conflict introduced? How is it resolved? There is so much you can learn just by spending an afternoon at a library or indie bookstore.

Q. Do you have a favorite writing exercise that you can share?
A. I am really bad at doing formal writing exercises. What I am good at is using the app Evernote to record seedlings of ideas. I have hundreds of Evernotes—each one represents one idea. Sometimes it’s just a title, or a theme, or a name. Sometimes it’s a story outline. I add to the notes over time. I wind up having this big repository of thought starters I can go back to when I am looking to start a new project.

Q. What are you working on now?
A. I’m putting the finishing touches on my next author-illustrated title, BUNNY’S STAYCATION (Scholastic, 2018.) I am also doing final art for OOPSIE-DO! (by Tim Kubart, HarperCollins, 2018) and SKELLY’S HALLOWEEN (by David Martin, Macmillan/HenryHolt, 2018.)