A BOOK OF BRIDGES 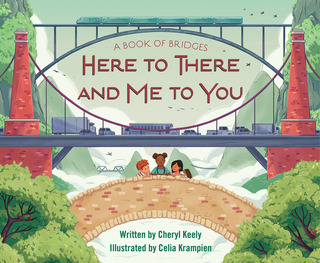 A BOOK OF BRIDGES By Cheryl Keely and illustrated by Celia Krampien (Sleeping Bear Press, February 2017)
Cheryl Keely is a journalist and also volunteers with a pet therapy organization. Along with her dog Dagaz, she visits local schools where the children take turns reading to the dogs. This month, Sleeping Bear Press is publishing Cheryl's first picture book, A BOOK OF BRIDGES —"a fine introduction to bridges and the great truth of connectivity (Kirkus Reviews).

Q. What inspired A BOOK OF BRIDGES?
A. Like many of my ideas, a few lines came to me as I was settling down to take a nap. I liked the rhythm of them, so I emailed the lines to myself. Then I emailed a few more and a few more and then got up from my nap. It was not a restful nap, but it was productive.

Q. How did you pick the title of your book?
A. The original title was Here to There and Me to You. I liked the thought of bridges making connections and bringing people together. I really liked the line in the book containing those words. It seemed to me to sum up the best connection of all – me to you and you to me. A Book of Bridges was added later to make it clear that the book was about bridges. It helps to let readers to know what a book is about!

Q. What is your favorite part of the book? And was that part in the first draft?
A. My favorite part is the ending line and that was in the book from the start.

Q. What kind of resources did you use in your research for this book?
A. I read as many books on bridges as I could from the local library (yeah for libraries) and researched bridge sites on-line.

Q. How did you decide which bridges to use in A BOOK OF BRIDGES?
A. Well, at first the bridge research was just for me to learn about different kinds of bridges and the facts weren’t originally included in the book. I wanted a wide variety showcasing different types of bridges and how they connect us to many different things. Sara Rockett at Sleeping Bear Press critiqued my story during a SCBWI Midsouth event and we talked about the research I did and she liked the idea of adding the facts. It fit well with the types of books Sleeping Bear Press publishes. I went back and added facts about the types of bridges contained in the story. A few were changed later. But it was hard. There are so many cool types of bridges out there.

Q. Did A BOOK OF BRIDGES receive any rejection letters? If so, how many (ballpark)?
A. I have been reluctant to submit and have only just started putting my work out into the world, but I do take advantage of opportunities within SCBWI to have my work reviewed. I was very fortunate with this book. I had it critiqued at a Midsouth SCBWI event in 2014. The agent doing the critique thought the book was OK, but wasn’t interested. She gave me some really good feedback and I worked that into a rewrite. I had the story critiqued again at a Midsouth SCBWI event in 2015. Sarah Rockett at Sleeping Bear Press did the critique and liked the story. She asked me to revise and submit to her. I was walking on air. I made the changes we talked about and sent the story off. She said, “yes,” we would like to buy this book! Funnily enough, she didn’t like the changes I’d made based on the first critique and the rewrite I did was more closely aligned with the version I had critiqued the first time – with the addition of the facts. Just goes to show how subjective writing is and to keep at a story you really believe in as the right publisher is out there looking for it.

Q. Describe your reaction when you received an offer on A BOOK OF BRIDGES.
A. I’m still walking on air. It also still feels a bit like a dream.

Q. What kind of input did you have in choosing an illustrator for the book?
A. I had no input on choosing the illustrator. But I am so happy with Sleeping Bear Press’ choice. Celia Krampien is very talented and I love her artwork.

Q. What jumped out at you when you saw the first sketches and jacket cover?
A. Oh my god, that’s my book. With pictures. My story …is ... becoming …a book! I loved the cover from the get go. It has multiple layers to it and captures so many of the bridges and the connections made by them and the people who use them.

Q. How long did A BOOK OF BRIDGES take to be published—from the time you received an offer until it was printed?
A: I submitted the revised story in November 2015 and received word in January 2016 that Sleeping Bear Press would like to acquire the book. It was around July I learned it would be coming out in February. I’m still stunned by how quickly it’s all happened.

Q. Is there anything you would change in the book today if you could reprint it? (Was there a part that you really loved but had to edit out? Or did you think of something later that you wanted to add?)
A: I had one line in there I really liked — “or be used for sneaking past trolls to make-believe lands” — because I liked the bridge it made to our imaginations. It is not in the book as it didn’t really fit with all the other realistic bridges. It was replaced with an animal bridge and that made me happy as I love animals and think it’s so fun that there are bridges just for animals. I’d had the bridge in an early version but pulled it because I had too many examples. It all worked out in the end.

Q. Do you have a favorite writing exercise that you can share?
A. I set a timer (usually 15 minutes) and write whatever comes out in that time. I find it to be both focusing and freeing. How weird is that? But with the time limit, I have to focus on getting something — anything — down, but since it can be anything, it’s also freeing. I will also use this method for revisions, too, so I have to get something done and not agonize of “what” to get done.

Q. What are you working on now?
A: I have a couple of stories out on submission (yeah, I’m getting better at putting myself out there) and a list of ideas I’ve been generating as a Storystorm participant in January that I’m hoping to turn into several manuscripts as a member of the 12 x 12 Picture Book Challenge 2017.

Thank you so much for inviting me on your blog. May your day have some happy.
Read More
Be the first to comment
Loading…}