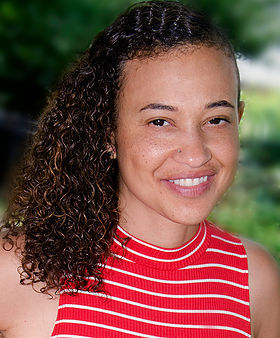 Daria Peoples-Riley's debut picture book THIS IS IT was published with Greenwillow/HarperCollins (February 2018). I GOT NEXT, a companion book will follow on July 30, 2019. Daria is also the illustrator of GLORIA TAKES A STAND by Jessica M. Rinker, a picture book biography about the life and work of Gloria Steinem (Bloomsbury, March 2019) .

So what are Daria’s 5 Favorites?:

My favorite place to write (and paint):

Outside, near my hummingbird feeder.

Beautiful Blackbird by Ashley Bryan. My two favorite lines: "I'll mix [the rest of] my black roots in a larger medicine gourd. I'll give what I can until it all gives out." And "We'll see the difference a touch of black can make. Just remember, whatever I do, I'll be me and you'll be you."

Share your gift of writing and/or art with those you love by giving them handwritten words and/or art. No matter what the reviews or the sales will be, those who love you will deem your work priceless, and that will nourish your journey.

Be present and attentive when you meet your readers.

To learn more about Daria’s work, visit her website. 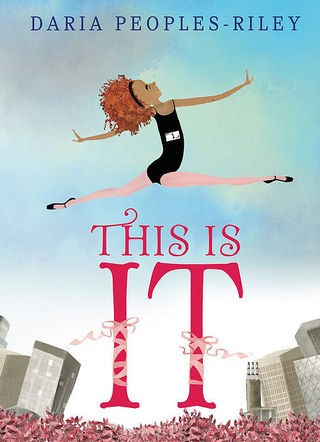 THIS IS IT by Daria Peoples-Riley (Greenwillow Books, 2018)
When Daria Peoples-Riley was nine years old, she got her first job in the children’s section of her hometown library. Later, she became a teacher and now she is a full-time author/illustrator. Released last month, her #firstpicturebook THIS IS IT is “a beautiful tribute to the power of dance” (Kirkus Reviews) that “shows a girl gaining confidence in herself—an important message for all children” (School Library Journal, starred review).

Q. What inspired THIS IS IT?
A. THIS IS IT was inspired by my daughter. She is an aspiring classical ballerina, and I originally wrote the poem as a gift to give to her on the day of her first audition. After I enrolled in an online picture book class, I was asked to illustrate a manuscript. I didn’t have a manuscript, so I pulled out the poem to illustrate and it became a picture book in the class.

Q. How did you pick the title of your book?
A. It was the last line of the poem, and it resounded the loudest to me. I thought it was fitting for a few reasons. First, there are only a few "This Is It" moments in life that can potentially alter the course of our destiny. It’s important for us to recognize these moments as they occur instead of in retrospect when often it’s too late, and we regret not making the choice we deeply desired. And, all of those choices determine our journey to becoming the best version of ourselves. We only have one journey, and one opportunity to accomplish all we dream and imagine for ourselves. This is it. The sooner we realize this, the better. And I hope children and the adults who love them receive that message after reading THIS IS IT.

Q. Do you write by hand or on the computer?
A. Both. Often, in the early stages, I write by hand . And, as I get further along, I move to my laptop. But truth be told, I’ve written entire manuscripts on my iPhone.

Q. What is your favorite part of the book? And was that part in the first draft? (Please send an image from the book or link to book trailer.)
A. The middle spread. It’s a visual representation of surrender. Whatever happens, happens. Whether we succeed or fail, let it be. We’re here. We’re trying. We’re not eliminating ourselves by not showing up. And yes, it was in the first draft, and the first final art sample I submitted.

Q. How did you decide between telling the story in first, second, or third person?
A. The poem came in second person, and it made sense because of all of the affirmations the shadow speaks to the heroine.

Q. How much of the story did you know when you began writing THIS IS IT?
A. All of it. It came out in one draft mainly because I never intended it to be a picture book. It was written from a mother’s soul to her daughter's heart, and that came from a place I'm not sure any other stories will ever come from again.

Q. Did you write the story first, then illustrate it? Or did the images appear before the words?
A. As I revised the text once it was acquired, my editor and I settled on the text first, and then I revised the illustrations.

Q. Did THIS IS IT receive any rejection letters? If so, how many (ballpark)?
A. Oh yes. Everyone rejected it in the first round. 6 or 7
times. But!! One of the rejections held a gem of advice that helped me revise it, and in the second round, it sold in a preempt within 48 hours.

Q. Describe your reaction when you received an offer on THIS IS IT.
A. Well, I was sitting with my mother as we were waiting for my grandmother to go into surgery. Marietta called me, and something told me the book sold before I answered the phone. I stepped out of the pre-op room , and when Marietta told me the news, I accidentally kind of, sort of, might've shrieked in celebration, and my mom came out and yelled at me. I took the phone call in the restroom to continue  my celebratory dance. When I shared the news with my mom, we all got a little weepy. It was really special. Both my mother and my grandmother's mother tried to be published, so I felt like all of our dreams came true.

Q. How long did THIS IS IT take to be published—from the time you received an offer until it was printed?
A. I received the offer in April of 2016, and its publishing date was February of 2018.

Q. Was there a part that you really loved but had to edit out? Or did you think of something later that you wanted to add?
A. I was really pleased with every word. There was one line, in particular, that was changed in copy edits, but I was just as happy with my revision as I was with the original line.

Q. Have you read THIS IS IT to kids? If so, which part of the book gets the best reaction?
A. Yes! Many times, and they all giggle when it says, "Shake it baby. SHAKE. IT. BABY." Then, they shake it. Haha!

Q. Did you create any book swag for THIS IS IT? If so, what kind?
A. I made bookmarks, posters of the cover, and little tote bags for the book launch.

Q. What is your #1 tip for picture-book writers?
A. Write a story for the audience of the one child who needs to read your story, and her story will touch the hearts of all the children who need to hear her story too.

Q. Do you have a favorite writing exercise or marketing tip that you can share?
A. Be yourself. There is only one you.

Q. What are you working on now?
A. I am illustrating a book by Jessica M. Rinker called Gloria Takes A Stand about the life of Gloria Steinem (Bloomsbury, 2019), and I am working on my next picture book with Greenwillow for Summer of 2019.
Q. Where can people find you? (Website, Twitter, Instagram, etc.)
A.
dariapeoples.com
Twitter and IG: @dariaspeoples
Book trailer: https://www.youtube.com/watch?v=OzzKIhf45A4
Read More
Be the first to comment
Loading…}