THE TIPTOE GUIDE TO TRACKING FAIRIES 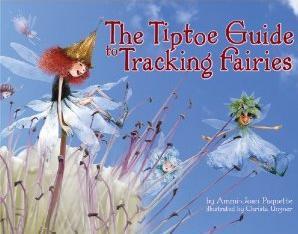 THE TIPTOE GUIDE TO TRACKING FAIRIES by Ammi-Joan Paquette and illustrated by Christa Unzner (Tanglewood Books, 2009)
Ammi-Joan Paquette is an agent, mother, traveler, chocolate connoisseur, and a writer of picture books and chapter books, including the PRINCESS JUNIPER series. But today she takes some time to look back at her very first picture book, THE TIPTOE GUIDE TO TRACKING FAIRIES where "kids will enjoy spotting the fantastical creatures hiding here and there amongst the flora and fauna of the outdoor settings” (Booklist).

Q. Was THE TIPTOE GUIDE TO TRACKING FAIRIES the first picture book manuscript you ever wrote? If not, what was the first picture book you wrote and what happened to it?
A: It’s definitely not the first manuscript I wrote - I’ve always been working on many different projects at once. This first dates back I think to 2005, so I’ve got no idea what other manuscripts were in the works back then. But I do know they were many, and generally in poor shape. ;)

Q. What inspired THE TIPTOE GUIDE TO TRACKING FAIRIES?
A: It was inspired by a nature walk I took with my daughters, who were then 6 and 8. They were not especially keen on walks at that time, so we decided that, to liven things up, we would take a stroll through our local nature preserve while being on the lookout for spots where fairies might be hiding. From there the story took on a life of its own - and the result is as you see it!

Q. How did you pick the title of your book?
A: Originally the book was called simply TRACKING FAIRIES. However, my editor felt this could invoke a harsher feel: ‘tracking’ in the sense of ‘hunting’ (poor fairies!). My writer friend Natalie Lorenzi suggested the “Tiptoe Guide” portion, which I think did a brilliant job of softening and tying the whole title together. I love the result!

Q. What is your favorite part of the book? And was that part in the first draft?
A: I think my favorite is probably the final page-turn spread revealing the fairies at the end. And interestingly, this was NOT in the original draft! My first incarnations were all very true to life, whereby the fairies were not found this time, but we had so much fun looking for them and will return again another time. The idea being that the readers could see the fairies, even though the kids didn’t. But my editor wisely said that we needed that satisfying payoff where the kids DO find their fairies - and I’m so glad she did.

Q. How long did THE TIPTOE GUIDE TO TRACKING FAIRIES take to be published—from the time you received an offer until it was printed?
A: First started writing it in 2005. It sold in 2007, and was published in 2009.

Q. Is there anything you would change in the book today if you could reprint it? (Was there a part that you really loved but had to edit out? Or did you think of something later that you wanted to add?)
A: I confess that there is a word repetition on the first page that makes me wilt each time I see it ;)

Q. What is your #1 tip to those who want to write picture books?
A: Read as many picture books as you can, especially ones which are debuts and newly released. Familiarizing yourself with what’s out there and what’s selling now is a really valuable tool to crafting your own masterpieces!