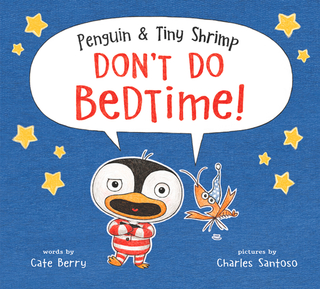 Art credit: Charles Santoso 2018
Cate Berry is a faculty member with the Writing Barn in Texas and also speaks at schools, libraries and conferences on such topics as "Gender Stereotyping and Poetic Devices" and "From Stand Up to Sit Down: Funneling Surprise and Stand-Up Comedy into Humorous Picture Books." Inspired by a class assignment, Cate wrote her #firstpicturebook which will be published on May 8th. Today she talks to us about crafting PENGUIN AND TINY SHRIMP DON’T DO BEDTIME!—a Junior Library Guild selection and “a definite do for bedtime” (Kirkus Reviews).

Q. Was PENGUIN AND TINY SHRIMP DON’T DO BEDTIME! the first picture book manuscript you ever wrote? If not, what was the first picture book you wrote and what happened to it?
A. It was close to my first book. I took two picture book classes at the Writing Barn in Austin, Texas (And I am lucky enough to teach there now). During my second class we were given the assignment of writing a bedtime book. I got a jump on the assignment and wrote this very quickly. It’s one of the few times something has come out “whole” and not needing a lot of revision (because that NEVER happens, as we know).

My very first picture book manuscript was called Puffin and Slip. It follows two creatures in a faraway galaxy. They are separated but stay connected through the moon and their special friendship. That manuscript is in a drawer right now but I think you’ve awoken my curiosity again! Thank you and I’ll keep you posted.

Q. What inspired PENGUIN AND TINY SHRIMP DON’T DO BEDTIME!?
A. As I stated above it was a class assignment. But also, as I examine it closely years later, it was a love letter to my children. They are only thirteen months apart and when they were little acted as one unit. Plus, they hate bedtime. Can you tell?

Q. How did you pick the title of your book?
A. Oh, that’s a fun topic. The book was originally titled This is Not a Bedtime Book. In the end, we wanted something a little more original and full of the voice of the characters. I brainstormed a list and Penguin & Tiny Shrimp Don’t Do Bedtime! was a favorite with the Harper Collins/Balzer+Bray team. I’m so glad we changed it. I really love the final title.

Q. Do you write by hand or on the computer?
A. I write by hand but I also write a lot on my iPhone notes app. I heard an interview with Annie Leibovitz talking about how the best camera to use was the one on you all the time. She champions iPhone photography and that got me thinking about using my Notes App for writing while I’m out in the world. There are so many opportunities to write: waiting for the dentist, right before your household wakes up, when insomnia hits in the dead of night. It’s freeing to just swipe over to an app and jot down inspiration when it hits.

Q. What is your favorite part of the book? And was that part in the first draft?
A. My favorite part of the book is probably the double spread of the “turn” or climax of the book. Penguin & Tiny Shrimp’s anti-bedtime shenanigans have reached a fever pitch and Charles Santoso’s illustrations are just so joyous and fun. He really captures my heart in that spread because it epitomizes being a kid.

Q. How did you select the names for your characters?
A. I’ve been asked this a lot and I wish there were a snappier answer. But the truth is they just came to me very suddenly while I was drafting. You have to pay attention to your story when things are flowing. Things were definitely in “flow” that day.

Q. How did you decide between telling the story in first, second, or third person?
A. A teacher of mine from grad school once said, “Every writer gets something for free.” My “freebie” is dialogue. It comes very organically for me. This entire book is told through dialogue and that is very much my voice as a writer.

Q. How much of the story did you know when you began writing PENGUIN AND TINY SHRIMP DON’T DO BEDTIME! ?
A. Well, my subconscious knew quite a bit since sleuth bedtime tactics had been my life for so long with small children. I think when I started the story I knew they would end up passing out at the end. I can’t believe in a story fully until I know the ending.

Q. Did PENGUIN AND TINY SHRIMP DON’T DO BEDTIME!  receive any rejection letters? If so, how many (ballpark)?
A. Oh yes. It was on submission for several months and we received around 8-10 rejections. But then, presto we got several offers all at once. The book ended up at auction with four publishing houses. It sounds cliché, but I guess the take-away is that you should never give up on something you believe in.

Q. Describe your reaction when you received an offer on PENGUIN AND TINY SHRIMP DON’T DO BEDTIME!
A. My agent called me and I had to pull over because I was driving. I screamed, of course, and then cried. I was very, very happy. Getting a book published relies on a lot of things lining up perfectly. I feel grateful every day for this opportunity.

Q. What kind of input did you have in choosing an illustrator for the book?
A. My editor was open to suggestions from me. I requested that she consider Charles Santoso among others. She was charmed by the idea of Charles illustrating the book and we were both thrilled when he agreed.

Q. What jumped out at you when you saw the first sketches and jacket cover?
A. Oh. They exceeded my expectations. Not only were they adorable but also they were also full of personality and verve. I don’t know how Charles did it. I have so much respect and admiration for illustrators in general. It was such a gift when the first sketches came in.

Q. How long did PENGUIN AND TINY SHRIMP DON’T DO BEDTIME!  take to be published—from the time you received an offer until it was printed?
A. I believe we sold the book in the fall of 2016. It debuts May 8, 2018.

Q. Was there a part that you really loved but had to edit out? Or did you think of something later that you wanted to add?
A. That’s a great question. There was not much editing on my end. However my editor did nudge me to perfect some of Tiny Shrimp’s lines, adding more specificity. I’m so glad she did as it goosed the humor, in my opinion, and made his character that much more fun.

Q. Have you read PENGUIN AND TINY SHRIMP DON’T DO BEDTIME!  to kids? If so, which part of the book gets the best reaction?
A. I have read the book to lots of kids! I think the biggest laugh always happens when the Uni-Hippo makes a surprise entrance. I think my biggest thrill is seeing kids delight in two aquatic creatures bounding into zany adventures avoiding sleep. It’s every kid’s fantasy, or at least the kids I know.

Q. Did you create any book swag for PENGUIN AND TINY SHRIMP DON’T DO BEDTIME!? If so, what kind?
A. Yes! My sister is a wonderful designer and she and I have just ordered postcards for librarians, bookplates, stickers and buttons. I also made an invitation for the book launch on May 20th at the indie bookstore BookPeople in Austin, Texas. You’re all invited!

Q. What is your #1 tip for picture-book writers?
A. Read, read, read and then read more picture books. Don’t underestimate how much you’re learning about the form while you read picture books, especially aloud.

Q. Do you have a favorite writing exercise or marketing tip that you can share?
A. I try to write something every day even when I have just a few minutes. One of my advisors in grad school taught me this. It can be as small as a picture book title idea or a stanza in a poem. But it does wonders for keeping your creative wheels greased.

Q. What are you working on now?
A. I’m in the middle of revising four picture books and I’m on my third major revision of a middle grade novel. I’m also dabbling in non-fiction picture books. It scares me because the research is so interesting I’m afraid I’ll fall down the rabbit hole and never come out!

I’m also reminding myself every week to pay it forward and be generous about helping other writers as much as time will allow. That’s important to me: connection and community.