CHARLOTTE THE SCIENTIST IS SQUISHED 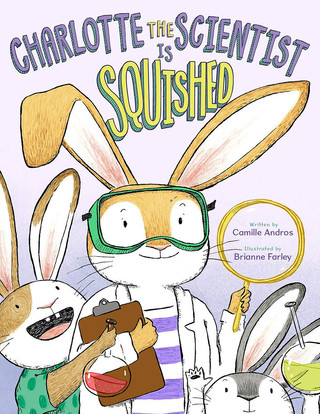 CHARLOTTE THE SCIENTIST IS SQUISHED By Camille Andros And Illustrated by Brianne Farley (Clarion Books, March 14, 2017)
E.M.T. Camille Andros is the oldest of seven kids, has six children of her own, and loves science. So it makes perfect sense that her #firstpicturebook would be CHARLOTTE THE SCIENTIST IS SQUISHED. But exactly how did she craft a book with "loads of charm methodically delivered" (Kirkus Reviews)? Read on to find out . . .

Q. Was CHARLOTTE THE SCIENTIST IS SQUISHED the first picture book manuscript you ever wrote? If not, what was the first picture book you wrote and what happened to it?
A. No, Charlotte wasn't the first book I wrote. The first serious try at a PB manuscript is a book called THE DRESS AND THE GIRL that sold to ABRAMS about six months after Charlotte sold. It will be out in the Fall of 2018.

Q. What inspired CHARLOTTE THE SCIENTIST IS SQUISHED?
A. There were several inspirations for Charlotte. My husband comes from a very large family of ten children. All of those ten now have children of their own totaling over 65 grandkids. I am the oldest of seven kids and I have six children of my own, so there is always lots going on and sometimes we all feel the need to have our own space.

I also love science and want kids, especially girls, to know that science is awesome and it's ok to love it too.

Q. How did you pick the title of your book?
A. It came to me while I was in the shower--like all good ideas I have;)

Q. What is your favorite part of the book? And was that part in the first draft?
A. My favorite spread doesn't even have any words-it's the spread where Charlotte lands in outer space and is so thrilled to finally have her very own space. Having Charlotte go to space was always in the manuscript, but she wasn't Charlotte in the first draft. She was Seymour.

Q. How much of the story did you know when you began writing CHARLOTTE THE SCIENTIST IS SQUISHED?
A. I wrote the first draft in one sitting and it was only 76 words. It evolved quite a bit from that first draft and, after a great SCBWI critique at a conference, the rest of Charlotte came to me pretty quickly. There were still lots of drafts ahead but it was mostly cleaning up the manuscript and making the story more focused.

Q. Did CHARLOTTE THE SCIENTIST IS SQUISHED receive any rejection letters? If so, how many (ballpark)?
A. Yes! Of course! Probably around two dozen or so from agents and then editors. But I wasn't really shopping Charlotte around as much as I was THE DRESS AND THE GIRL which was the first book I wrote and was more focused on initially.
That book got lots and lots of rejections, but each personalized rejection (they weren't all like that of course) and the feedback that came with it was so helpful in improving each manuscript.

Q. Describe your reaction when you received an offer on CHARLOTTE THE SCIENTIST IS SQUISHED.
A. I had just left the dentist when my agent called to tell me we had an offer on Charlotte--it was super exciting and I couldn't believe it was happening. Then I was even more surprised when we received three more offers on top of that first one. It sounds so cliche to say I was beyond thrilled to get that kind of response for my first book. The day my agent called with all of the final offers and asked if I was "sitting down" was kind of an out-of-body experience. I loved reading the stories of authors getting their first book deals or signing with an agent and now it was happening to me. It was very surreal.

Q. What kind of input did you have in choosing an illustrator for the book?
A. In an unusual turn of events my agent and I discussed pairing my manuscript with one of the RLM (Rodeen Literary Management-the agency that represents me) illustrators since I was new. Brianne Farley's style was perfect for Charlotte and I absolutely love what she has done to bring her to life. So lucky for me I kind of got to choose which doesn't happen very often:)

Q. What jumped out at you when you saw the first sketches and jacket cover?
A. That favorite spread I mentioned above really jumped out at me. I love the look of pure joy on Charlotte's face.

I didn't get to see the jacket cover until much later and it went through many different versions so I saw some a few before the final cover selected and loved them all. It's just so much fun to see a character that lives in your head come to life on the page.

Q. How long did CHARLOTTE THE SCIENTIST IS SQUISHED take to be published—from the time you received an offer until it was printed?
A. The offer for Charlotte was finalized in June of 2015. Charlotte will be out in the world on March 14, 2017, so just a couple months shy of two years.

Q. What is your #1 tip to those who want to write picture books?
A. Don't give up. The authors who are published are the ones who didn't give up.

Q. Do you have a favorite writing exercise that you can share?
A. Endings are hard for me. One thing I like to do to help is imagine what I want the reader to feel at the end of the book and then start writing different endings that would give that feeling.

Q. What are you working on now?
A. I am working on edits for the second Charlotte book, and the book I mentioned above, THE DRESS AND THE GIRL, to be illustrated by Julie Morstad that will be out Fall 2018. I'm also working a middle grade and a YA novel and I also have a few other projects in the works that I have my fingers crossed for.