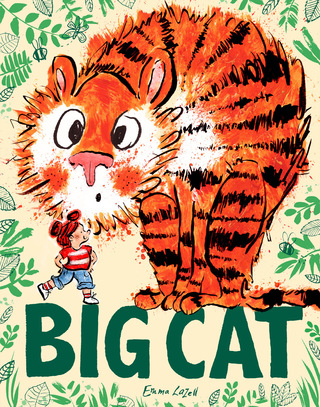 Get to know your characters inside out. Take your characters and put them into scenarios you won't necessarily find in the book. I do this through drawing, by drawing them in different settings, such as their home, their classroom, on holiday. But I'm sure the same thing can be achieved through writing too.

Inspired by her naughty cat, Emma Lazell wrote and illustrated her #firstpicturebook while finishing her Masters of Illustration at the Cambridge School of Art. At her graduation exhibit, a publisher spotted it and now BIG CAT is ready to pounce onto  bookshelves!

A. It was the first that I finished and felt happy with! I'd written and illustrated a few before but never got them quite right, or managed to get to an ending I was happy with. In some cases, the story worked, but the illustrations didn't, or vice versa. With BIG CAT everything clicked.

A. My Cats! BIG CAT started out as a story all about an oversized domestic cat, based on my naughty cat Ruby. It was a few drafts on that BIG CAT became… without revealing any of the story… the Big Cat that he is.

A. I don't fully remember, the title just seemed to fall into place. I think for a long while the story was just called Cat.

A. By hand, usually while story boarding. I like to be able to lay things out visually and quickly and whenever inspiration comes to me.

A. There are three moments I really like: the big tiger reveal for its saturation of orange; the tiger tea party; and the moment where Isobel realises how fun Big Cat is, compared to grandma's other cats.

A. I didn't have a particularly difficult job here, as my main characters have very self-explanatory names: Grandma and Big Cat. Isobel, the little girl, is named after my younger sister, although her name doesn't actually appear in the story.

Q. What made you decide to tell the story in first person?  Q. Why did you write BIG CAT in the past tense?

A.(Answering the two questions above together) In both cases this wasn't a conscious decision, more something that just happened as I wrote. The writing voice I used didn't really change at all from the first conception and drafting of the idea.

A. The images definitely came first. I feel as if I am an illustrator who has somehow fallen into being a writer too. But pictures certainly come first, because that's what I am used to. I think very visually and pictorially and know exactly what will happen visually, before even beginning to think about a written story. Since BIG CAT, I have actually tried to work the other way round, and write first, but it doesn't work for me.

Q. Did BIG CAT receive any rejection letters? If so, how many (ballpark)?

A. No. I was really lucky with BIG CAT. I finished it during my Masters in Children's Book Illustration at Cambridge School of Art, and it was spotted by my lovely publishers at my graduation exhibition.

Q. Describe your reaction when you received an offer on BIG CAT.

A. Over the moon of course!

Q. How long was the publication process for BIG CAT— from the time you received an offer until it was printed?

A. Almost exactly a year, I signed a contract in Spring 2018, and BIG CAT will release in the UK on the 4th April 2019. But it went to print in much sooner than that. I worked on it between May and October and I received the first proofs in late October, and the first advance copy in December.

A. For a long time, BIG CAT had a different, more abstract cover that I felt really happy with. But it wasn't commercial enough. It took persuading and hard work to create the new cover, but it was definitely the right decision. I'm so much happier with the final cover. It's really easy to get attached to a piece of artwork or writing and much harder to see the benefits of changing it. But in this case it was definitely the right decision.

A. Keep going! Expect and allow your idea to change and morph continually. Lay your story out visually from word go to get the pacing and exciting page turns. You'll know when something clicks.

A. Get to know your characters inside out. Take your characters and put them into scenarios you won't necessarily find in the book. I do this through drawing, by drawing them in different settings, such as their home, their classroom, on holiday. But I'm sure the same thing can be achieved through writing too.

A. Top secret at the moment, but I can say, if you quite liked BIG CAT but you're more of a dog person, then this will be the book for you!

Q. Is there a public launch for the book (reading/party at bookstore, library, etc.)? If so, provide details:

A. Yes! BIG CAT book launch will be the 10th April, at Heffers Bookshop, Cambridge, UK

BIG CAT will be released in the UK on the 4th April 2019. Available to preorder now. Coming soon to the US and Commonwealth.