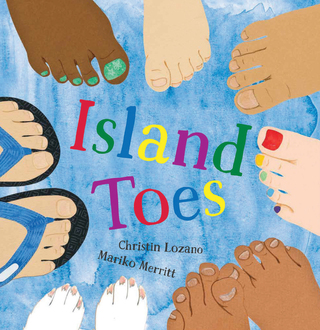 Q. What inspired ISLAND TOES?
A. During the time I was working on ISLAND TOES, I was super involved with developing my library's weekly storytime program for toddlers and preschoolers.  I was always on the lookout for local, Hawaii-based picture books for my youngest "readers," since children as young as nine months old would attend storytime.  Most of the local books I could find were too wordy for the ages I was reading to.  The one exception was a Hawaii classic called WHOSE SLIPPERS ARE THOSE? by Marilyn Kahalewai.  It is still one of my favorites as it is simple, has wonderful illustrations, and the subject is all about something young children in Hawaii can identify with—our state's footwear of choice, the slipper (flip-flop). This book inspired me to write my own story short enough for a two-year old's attention span and about a subject everyone knows well—toes!

Q. How did you pick the title of your book?
A. Actually, I'm embarrassed to say it, but my working title was Those Toes.  After I began working with my publisher, they came up with the much more appropriate title ISLAND TOES!  I'm so happy they encouraged me to think about a different title than what I originally had in mind.

Q. What is your favorite part of the book? And was that part in the first draft?
A. One of my favorite parts of the book is the surfing spread where it shows a girl surfing. Not only is it wonderful to showcase girls in sports, but this young girl is clearly experienced enough to be able to surf “toes-on-the-nose” style. I remember this phrase coming to mind after I had been working on the manuscript for quite a while.

Q. How much of the story did you know when you began writing ISLAND TOES?
A. I had no idea there were so many places and "faces" of toes when I began writing this book!  Almost every day, I had a whole new list of possible toes and the final result was definitely a pared down story of my favorites.

Q. Did ISLAND TOES receive any rejection letters? If so, how many (ballpark)?
A. I feel that my experience was probably NOT the norm because I only sent my manuscript to two publishers, and both are locally based, here in Hawaii.  One never responded and the other one, which was my publisher of choice, accepted my manuscript.  However, it did take quite a few years and a couple of submissions to garner their attention.

Q. Describe your reaction when you received an offer on ISLAND TOES.
A. I was absolutely ecstatic!  I had originally submitted my manuscript to the publisher about five years prior to receiving an offer, so it was the product of quite a few years of waiting, praying, and pursuing my idea.  My publisher told me that "it is all about timing," and in my case this was definitely true.

Q. What kind of input did you have in choosing an illustrator for the book?
A. Since this was my first book, I was not even aware that I had any choice until the book was almost completed.  So I was extremely happy when I found out that Mariko Merritt was going to be illustrating ISLAND TOES.

Q. What jumped out at you when you saw the first sketches and jacket cover?
A. I absolutely loved the choice of colors used on the jacket cover and could tell from the sketches that we were all on the same wavelength as far as the artistic direction of the book.  I was relieved that it looked as great as it did because we all know that the illustrations can "make or break" a picture book.  I can't say enough good things about Mariko's work!

Q. How long did ISLAND TOES take to be published—from the time you received an offer until it was printed?
A. The whole process took about 1 year.

Q. Is there anything you would change in the book today if you could reprint it? (Was there a part that you really loved but had to edit out? Or did you think of something later that you wanted to add?)
A. I wouldn't necessarily change the content, but someone pointed out an aspect of the book that I would change if it is reprinted.  Unfortunately we did not include the diacritical markings on the Hawaiian words and I would love to see these added.

Q. Can you share any funny or memorable parts of letters from kids about ISLAND TOES?
A. At this point, I haven't received any letters, but I do have a couple of adorable pictures of children stamping their toes on the last few pages.  (The end of the book includes an activity where readers can stamp their toes on the last four pages.)

Q. When you do readings of ISLAND TOES, which part of the book gets the best reaction?
A. Almost every time I read ISLAND TOES, kids giggle at the beginning when it comes to "clean toes, stinky toes."  They seem to really relate to the illustration of stinky toes.

Q. What is your #1 tip to those who want to write picture books?
A. Read, read, read!  Spend lots of time at your local public library reading what's currently being published as well as older titles.  This will give you the best picture of the children's picture book world and it may even spark an idea for your first book.

Q. What are you working on now?
A. The main thing I’ve been working on has been the promotion of ISLAND TOES. I didn’t realize all the self-promotion and events you need to do in order to share your work with others. I’m hoping to begin working on a few of the new ideas I have this summer though!
To learn more about Christin's work, visit her publisher's website.
Read More
Be the first to comment
Loading…}