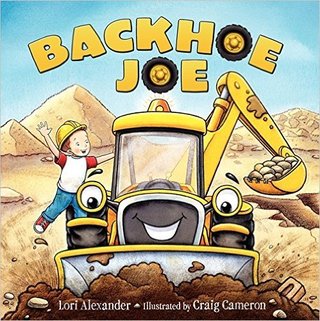 BACKHOE JOE By Lori Alexander and illustrated by Craig Cameron (Harper Children's, 2016)
As a kid, Lori Alexander made her own books to keep busy on rainy days. Now she's a grown up, a mom, and a picture-book writer (whether it's raining or not!). Today she talks to us about her debut book BACKHOE JOE—"A perfect, heartfelt book for boys and girls who like trucks and construction things" (San Francisco Book Review, 5-stars).

Q. Was BACKHOE JOE the first picture book manuscript you ever wrote? If not, what was the first picture book you wrote and what happened to it?
A. Yes and no. My first attempt at a picture book was a story about construction trucks with a zoo setting. But that version lacked tension. It morphed into a story about a boy who wrote letters to his parents. Each letter explained why a backhoe was the perfect birthday gift. But that version lacked a just-right ending. One of his letters compared a backhoe to a puppy. Those few sentences were the spark for the current version of BACKHOE JOE. (TIP: Dig deep with your revisions. The story’s in there somewhere!)

Q. How did you pick the title of your book?
A. I wanted a title with a nice ring to it (à la Fancy Nancy). In the story, J.O.E. is painted on the side of the backhoe and it stands for Jumbo Operating Equipment. When the boy character sees it, he calls the truck Joe.

Q. What is your favorite part of the book? And was that part in the first draft?
A. The twist ending. Yep, it was there from the get-go.

Q. How did you select the names for your characters?
A. Besides Backhoe Joe, there’s only one named character—a boy named Nolan. At the time, my daughter had a Nolan in her preschool class. He could already read and that’s probably why the name stuck in my mind.

Q. Why did you decide to tell the story in third person?
A. I flipped between 3rd person, 1st person (in my epistolary version), and back to 3rd person. Third felt right for the final version and is the most common picture book POV. (TIP: Try alternating the POV of your work-in-progress. You may like what the change does for your story).

Q. How much of the story did you know when you began writing BACKHOE JOE?
A. Only that I wanted to tell a fictional truck story. I read so many truck books to my son when he was little. Many were non-fiction and that’s where he learned all the names of the trucks and their various functions. There seemed to be fewer fictional truck books and I wanted to take a stab at a story where a kid wanted a construction truck of his own.

Q. Did BACKHOE JOE receive any rejection letters? If so, how many (ballpark)?
A. Oh, yes! Pre-agent, I sent the early versions to various publishers and ended up in their slush piles. There were a handful of non-responses and some form rejections. I nearly gave up at that point. The process was so slow and I didn’t feel like I was learning enough from the rejections. But the more I read, the more I realized rejections are all part of the business. I kept at it and eventually landed an agent. Once I had an agent and JOE was closer to its current version, we received 3-4 rejections in the first round of submissions. One of the editors had a useful bit of feedback which helped me streamline the story into its current version. BACKHOE JOE sold in auction in the next round of submissions. (TIP: Don’t give up!)

Q. Describe your reaction when you received an offer on BACKHOE JOE.
A. The day of the auction is right up there with my wedding day and the birth of my two kids. Sound crazy? Maybe. But now I know walking down an aisle and pushing out a kid or two is easier than selling a traditionally-published picture book (for me, at least!).

Q. What kind of input did you have in choosing an illustrator for the book?
A. Not much. The entire process was new to me as a debut author. They ran Craig Cameron’s name by me and shared a few illustrations from his portfolio. I remember reading his bio and learning he worked on Bob the Builder books so he seemed like a good fit.

Q. What jumped out at you when you saw the first sketches and jacket cover?
A. The first things that jumped out at me were the wheels that took the place of the Os in the title (love!) and Backhoe Joe’s big smile!

Q. How long did BACKHOE JOE take to be published—from the time you received an offer until it was printed?
A. It sold in July 2012 and released in September 2014, so just over two years.

Q. Is there anything you would change in the book today if you could reprint it? (Was there a part that you really loved but had to edit out? Or did you think of something later that you wanted to add?)
A. Very little editing occurred after the sale. A few words added, a few removed. I try not to think about what I could have done differently. It would make me crazy!

Q. Can you share any funny or memorable parts of letters from kids about BACKHOE JOE?
A. I have received lots of sweet letters after visiting schools (with surprisingly good illustrations of backhoes!). But my favorite fan “mail” was a video sent to me by PB author Corey Rosen Schwartz. In it, a friend read BACKHOE JOE to her young son, who had memorized the text and was able to complete the last word in each sentence. It still warms my heart to see such a little guy “pre-reading” the text I wrote!

Q. When you do readings of BACKHOE JOE, which part of the book gets the best reaction?
A. Definitely the final spread. The illustration leads the kids to think one thing and then BAM! Twist ending. After we finish reading, I like to talk with the kids about why I chose that ending versus the expected one.

Q. What is your #1 tip to those who want to write picture books?
A. Don’t give up! You WILL receive rejections letters. So. Many. Rejections.

Q. Do you have a favorite writing exercise that you can share?
A. I don’t have a writing exercise to share. I do like to participate in Tara Lazar’s annual PiBoIdMo event for idea generation. Check out her blog here.

Q. What are you working on now?
A picture book biography and a few other quirky fiction PB manuscripts. My next picture book, FAMOUSLY PHOEBE, comes out in Fall 2017 with Sterling.

To learn more about Lori and her projects, visit her website.
Read More
1 Comments

It's a very sweet book!!