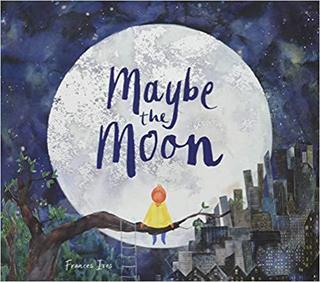 “The favourite pages seem to be the first ones – everyone loves to spot all the animals, and wherever they crop up again and can be spotted later in the book is popular.”

Inspired by her own experience of moving to London from the countryside, Frances Ives wrote and illustrated her #firstpicturebook. MAYBE THE MOON reminds us that whatever the differences between people and places, we are all united and are never alone when we share the same moon. Today Frances tells us how she created her debut picture book.

A. It was! I started a very rough draft when I was at university, and never quite let go of the ideas behind it – I'm really pleased I didn't now!

Q. What inspired MAYBE THE MOON?

A. I think my main inspiration is my own experience of changing environments – I'm originally from the countryside, and have lived in London for about nine years altogether. I believe that you can really change your own experience of environments by embracing all the positives you can find, and if you need to as I do, finding the areas of quiet amongst the bustle.

A. With the help of my publisher – we felt it just brought the whole message of the book together and of course, it mirrors the text on the final page.

A. The illustrations and story go hand in hand for me, and notes are often scribbled on the edge of rough pencil drawings, so the story is created from there and mostly by hand!

A. I love the night time cityscape, which has been in the drafts from the very beginning of the idea. It really sums up the whole message for me, as Eric sees the grey city in a whole new light with his friends…. It was also my favourite to make, which I'm sure influenced my decision!

A. The only named character is Eric – he's been called this since the first draft nearly a decade ago! I think it was just an unusual name that I liked. A little bit of unknown information – his friends are called Ralph and Jess, and the sausage dog is called Reginald, but I like to ask children what they would like to call the animals when reading it to them; my favourite so far is 'Frog the Dog'.

A. When creating the story we were imagining it being read aloud, and by using the third person we could give the impression that the narrative voice was whoever was reading the book to a child. We were really keen to give Eric his own voice as well, though, which is why the rhyming verse is in the first person.

Q. How much of the story did you know when you began creating MAYBE THE MOON?

A. I had an idea of the arc, what I wanted to happen, and the illustrations I wanted to make, and that really influenced the story.

A. My initial ideas tend to start visually, and are influenced by the sort of images I would like to produce. I worked really closely with the publishers to help develop the story further, which was really helpful – especially for my debut book!

Q. Did MAYBE THE MOON receive any rejection letters? If so, how many (ballpark)?

A. No! I was incredibly fortunate that Michael O'Mara were the first to take a look at the whole premise and come back to me with a positive answer! I know that this isn't the case for most people, and I fully expect to have a few rejections in the future.

Q. Describe your reaction when you received an offer on MAYBE THE MOON.

A. I'm aware this sounds like a pun – but I was over the moon! I wanted to get to work straight away, and make the most of an opportunity I couldn't quite believe was happening!

Q. How long did MAYBE THE MOON take to be published—from the time you received an offer until it was printed?

A. 14 months in total, from my contract being signed until publishing date.

A. There are always little details that I want to add, and I'm a bit of a quibbler so will always look back and critique my own illustrations, or think 'why didn't I add an extra flower there? Or an extra bird? Or change that expression slightly?' I think with an extra page I would have really expanded on all the fun things Eric and his friends could get up to in the city.

Q. When you read MAYBE THE MOON to kids, which part of the book gets the best reaction?

A. The favourite pages seem to be the first ones – everyone loves to spot all the animals, and wherever they crop up again and can be spotted later in the book is popular.

Q. Did you create any book swag for MAYBE THE MOON? If so, what kind?

A. My publisher created some lovely little charm bracelets with silver crescent moons on them, which they sent out in PR packs, and it's been lovely to see them on wrists over twitter and instagram.

A. Don't give up on an idea, but be prepared to compromise too.

A. As above, just keep going and don't lose faith. It's ok to put something to one side for a while (in my case it was several years!) but if you believe it can work you can find a way.  As far as marketing goes, social media can be an excellent tool, but don't let it swallow you up!

A. I've got a couple of other pitches that I'm working on, and I'm excited to work up the roughs for those! I'm also working on some personal artwork, to push my own practice.

A. You can find me at '@francesives' across all my social media accounts, apart from facebook where I had already inconsiderately taken my own name… so I'm Frances Ives Art on that page.