HORTENSE AND THE SHADOW

Tags: HORTENSE AND THE SHADOW, Natalia and Lauren O’Hara 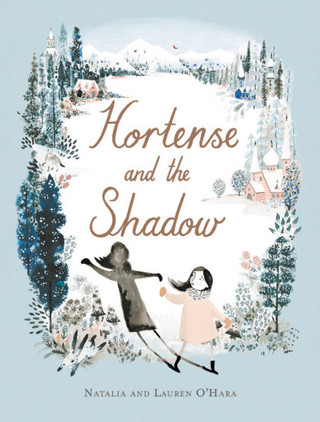 HORTENSE AND THE SHADOW by Natalia O’Hara and Lauren O’Hara (Puffin, 2017)
As children, sisters Natalia and Lauren O’Hara adored the tales their Polish grandmother told on snowy nights and planned to create their own stories one day. Now all grown up, script editor Natalia and set designer Lauren have created their #firstpicturebook together. “Children who love eerie stories will be fascinated" (Publishers Weekly) by HORTENSE AND THE SHADOW —“a handsome debut picture book...beautifully designed" (The New York Times ).

Q. What inspired HORTENSE AND THE SHADOW?
A: A lot of different things—fairytales, Eastern European illustration, animated films. But most of all it's a personal story, rooted in our own childhood, about struggling with who you are.

Q. How did you pick the title of your book?
A: It was the obvious choice really. We were asked at one point to change it to HORTENSE VERSUS THE SHADOW, which made sense, but we thought that sounded like a prizefight.

Q. Do you write by hand or on the computer?
A: I plan and draft in a scribbly old notepad and then type up the first full draft later.

Q. What is your favorite part of the book? And was that part in the first draft?
A: Hmm. I like how the bandits are hidden on every spread, but Hortense doesn't notice because she's busy fighting her shadow. That was a second draft solution I found to the problem of how to introduce the true antagonists at the start, but subtly enough that we didn't tip our hand that it's not the shadow Hortense needs to fear.

Q. How did you select the names for your characters?
A: This book only has one named character, the little heroin Hortense. I made a list of names that sounded like they were out of a gothic novel, then we picked the one we liked best. Gothic because it's a genre where you incarnate the terrors young women face, which is what I wanted to do.

Q. How much of the story did you know when you began writing HORTENSE AND THE SHADOW?
A: The idea was clear up until where Hortense cuts off her shadow. I had to figure out what happened after that, though I knew the shadow would have to save Hortense somehow.

Q. Did you write the story first, then illustrate it? Or did the images appear before the words?
A: I came up with the story and then told it to Lauren. She liked it, so we both went away and started work, talking as we went to sort through our ideas. So the story came first and then the words and images followed hand in hand.

Q. Did HORTENSE AND THE SHADOW receive any rejection letters? If so, how many (ballpark)?
A: Seriously Karlin. So many. We wrote to every agent we could find, and only one (the wonderful Angharad Kowal at Kowal Stannus Agency), was interested. But after all that, eight publishers wanted the book, which goes to show that sometimes even agents misjudge the market.

Q. Describe your reaction when you received an offer on HORTENSE AND THE SHADOW.
A: Disbelief and joy. Our agent called me to say she'd closed a deal with Penguin Random House and then I called Lauren to tell her. We were both laughing with surprise and delight.

Q. How long did HORTENSE AND THE SHADOW take to be published—from the time you received an offer until it was printed?
A: Just under a year and a half.

Q. Was there a part that you really loved but had to edit out? Or did you think of something later that you wanted to add?
A: There's a page where Hortense leaves her house at night and the text says she sees nothing, just the dark. It used to be a double-page spread and it was quite lyrical and Lauren's image was wonderfully evocative, but unfortunately it had to be squeezed into a single to fit the standard 32-page format.

Q. Have you read HORTENSE AND THE SHADOW to any kids? If so, which part of the book gets the best reaction?
A:  That's always so fun! I don't know why but they really love the bit where the shadow turns into a bear. I'd thought it was quite scary but they laugh their heads off.

Q. Did you create any book swag for HORTENSE AND THE SHADOW? If so, what kind?
A: Lauren designed wrapping paper, christmas baubles and bunting for bookshops. She used to be a designer so she's great at that kind of stuff.

Q. What is your #1 tip for picture-book writers or illustrators?
A: Something we've found useful is the discovery that criticism is a bullseye pointing to a problem that the critic might not have worked out. So if your agent or editor says "You need to introduce your antagonist on page 3", it's possible that's not what you need to do at all, but there's almost definitely something wrong with page 3.

Q. Do you have a favorite writing exercise or marketing tip that you can share?
A: I make spider diagrams and lists when I'm blocked.

Q. What is your next project together?
A: It's a picture book called THE BANDIT QUEEN about a baby girl who's raised by bandits. HORTENSE AND THE SHADOW is a restrained, quiet book so we wanted to do something full of colour and chaos. It's published by Puffin, and out in October this year.