MY DOG'S A CHICKEN 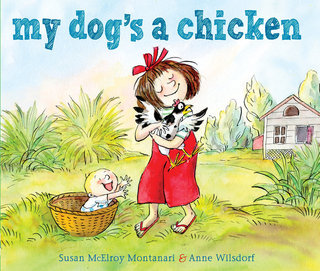 MY DOG'S A CHICKEN by Susan Montanari and illustrated by Anne Wilsdorf (Schwartz & Wade, 2016)
Susan Montanari is the author of upcoming books WHO'S THE GROSSEST OF THEM ALL? and HIP HOP LOLLIPOP but today she is talking about her first picture book MY DOG'S A CHICKEN—"an ideal read-aloud that will have kids and adults chuckling" (School Library Journal).

Q. Was your first published picture book, MY DOG'S A CHICKEN, also the first picture-book manuscript that you wrote? If not, what was the first book you wrote and what happened to it?

A. The first picture book I wrote was called “MIRE THE LYIER (A Dragon Tale)”
This was before the Dragon Tale cartoon series came out years later. Some time ago an article was written stating the ten worse mistakes new children’s book writers make. This story contained all ten and has been rightfully destroyed. The next book I wrote that I thought was publishable was called “ALLIGATOR SOUL.” I still love this story, but have not been able to sell it.

Q. What event or person inspired MY DOG'S A CHICKEN?

A. I had a dream about a chicken and an old woman. When I woke up I wrote it down, but I changed the old woman to a little girl.

A. My favorite part is when Mama let’s Pookie sleep in the house and yes it was in
the first draft.

A. Lula Mae’s name came from “BREAKFAST AT TIFFANY’S.” Holly Golightly’s
name was Lula Mae, before she decided to change her life. The other names
I just thought were funny.

Q. Why did you decide to tell the story in third person?

A. Telling the story in third person was not a conscience decision, that is how it
came to me.

Q. How much of the story did you know when you began writing MY DOG'S A CHICKEN?

A. I basically knew the beginning and the end. I just had to figure out how to get there.
Although the editor shortened the end a bit, because she wanted the story to happen all in one day.

Q. Describe your reaction when you received an offer on MY DOG'S A CHICKEN.

A. My reaction, as you can imagine, was pure joy!


Q. What kind of input did you have in choosing an illustrator for the book?

A. I had absolutely no input into choosing an illustrator.

Q. What jumped out at you when you saw the first sketches and jacket cover?

A. The pure joy on Lula Mae’s face matched my own.

Q. How long did MY DOG'S A CHICKEN take to be published--from the time you received an offer until it was printed?

Q. Is there anything you would change in the book today if you could reprint it? (Was there a part that you really loved but had to edit out? Or did you think of something later that you wanted to add?)

A. There are a couple pictures, if it was in my power, that I would like to change. Just
minor details.

Q. Can you share any funny or memorable parts of letters from kids about MY DOG'S A CHICKEN?

A. This isn’t a letter, but one of the first times I read it to a group of children, at the end
a little girl raised her hand and said, “I would of eaten that chicken for breakfast.”

Q. When you do readings of MY DOG'S A CHICKEN, which part of the book gets the best reaction?

A. The children are very concerned about where Baby Berry went and if he is okay.
Then when the story is over they like to go back and find where he wandered off and
where he went.

A. I have several picture books in varies degrees of completion and I’m working on a
YA romance.

A. Find a good critique group, be prepared to accept criticism and act on it.

To learn more about Susan and her books, visit her website.
2 Comments

This looks like such a sweet and funny book! (but I definitely wouldn't have eaten the chicken for breakfast ;) )

Certainly...this is a lovely book for children. The story, the imagination and the dynamics of the book is one of my favorite!!!