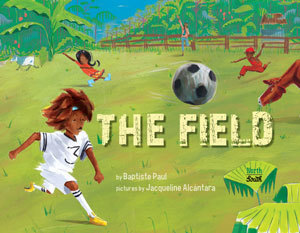 THE FIELD by Baptiste Paul and illustrated by Jacqueline Alcántara (NorthSouth, 2018)
Baptiste Paul is a dad, sports fan, woodworker, gardener, and school speaker. On March 6th, he will also be an author. Today he does a quick Q&A of his #firstpicturebook THE FIELD—an “excellent” (Kirkus Reviews) and “engaging book . . . sure to resonate with children who are passionate about soccer and even those who simply enjoy lively play. (School Library Journal)

Q. What inspired THE FIELD?
A.The inspiration for THE FIELD came about as a result of my childhood experiences. The idea for the story came while playing outside in the rain with my children. They were so happy running in rain, splashing in pools of water and rolling in the dirt. I saw myself in them and, although our childhood experiences were totally different, we found joy in the same exact thing.

Q. What is your favorite part of the book? And was that part in the first draft?
A. I like every part of the book. One of my favorite parts is when the kid is chasing the animals off the field. It was something we did everyday before we started our game. This scene was in the first draft and it was the only part where I included illustrator notes.

Q. Was there a part that you really loved but had to edit out? Or did you think of something later that you wanted to add?
A. Kids getting into a little scuffle after a rough tackle from one of his friends was cut from the book. I believe that part was important simply because, there were days we got into scuffles with each other but we always found a way to settle our differences before the game ended.

Q. What is your #1 tip for picture-book writers?
A. Live life deliberately and ideas will find you. Record moments for later use. What works for one person might not work for the other. With life constantly evolving around me, I walk around all day with a memo book and a pencil tucked above my ear to record those moments.

Q. Do you have a favorite writing exercise or marketing tip that you can share?
A . When I’m working on a piece, I ask questions like who, what, why, where, when and how over and over again. I always think universal — similarities and differences. Most times those questions are being answered while I pace back and forth talking out loud to myself. 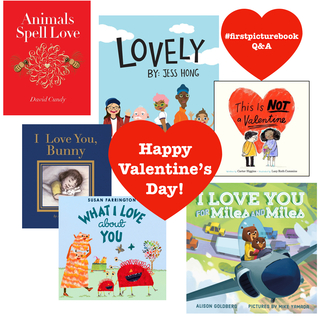 This Valentine’s week, let’s treat ourselves to a box of chocolates and rereading these lovely #firstpicturebook Q&As:

WHAT I LOVE ABOUT YOU: “It seemed natural to tell the story in the first person. I wanted the child to feel the parent/caregiver was speaking directly to them.”

ANIMALS SPELL LOVE: “A wise author listens to and learns from editors for whom his/her book isn’t a “fit.”

LOVELY: “I wrote most of this book on post it notes.”

I LOVE YOU FOR MILES AND MILES: “When I’m looking for inspiration I like to go on ‘writing walks.’”

THIS IS NOT A VALENTINE: “The best picture books are created by people who are true fans of the form.”

I LOVE YOU, BUNNY: “I wrote it as a short poem first, then started sketching and storyboarding.”
Read More
Be the first to comment 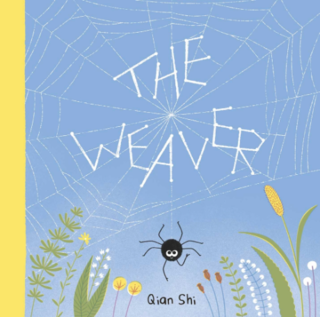 THE WEAVER by Qian Shi (Anderson Press, 2018)
Animator and illustrator Qian ('Chen') Shi grew up in Shijiazhuang, a northern city in China. Her short animation Shoe won two awards and she worked as an artist on Tim Burton’s movie “Frankenweenie.” She’s a little bit afraid of spiders but that didn’t stop her from writing her #firstpicturebook THE WEAVER—a “beautiful and wise” (Kirkus Reviews) story that “integrates facts about the natural world with this unusual arachnid adventure (The Irish Times).

Q. What inspired THE WEAVER?
A. The short answer is that I saw a piece of leaf stuck in the middle of a spider web, somehow this scene just got my imagination going. The full answer is that THE WEAVER is a story about what I have been through my life — I’m originally from China and have lived in Norway, Denmark, and the U.K. My life was formed and transformed through all the years of moving around. It hasn’t been the easiest experience, partially due to my ever-growing collection of books, things, and even furniture! Finally, I was quite into the idea of minimalism. Although I have to admit that I would probably never be able to be a minimalist myself, I have given a lot of thought about it. So when I saw this leaf on the spider web, the story of THE WEAVER formed in my head.

Q. How did you pick the title of your book?
A. The title “The Weaver” came sort of naturally when I was already working with my editor Libby (Andersen Press). Stanley the spider is a web weaver, as spiders do, but he also weaves his imagination as a way of creativity. It just felt right to call this book “The Weaver”.

Q. Do you write by hand or on the computer?
A. I would say I write by doodling on the paper.

Q. What is your favorite part of the book? And was that part in the first draft?
A. Perhaps it is the first spread—“Every spider leads a life of adventure”—as it sets the key tone of the entire book with spiders flying around holding a piece of leaf or flower. I had been doodling them even before I had the entire story figured out. I knew I wanted something magical and poetic for the story.

Q. How did you select the names for your characters?
A. Coming up with a name for the main character was the hardest thing! Both Libby and I had suggested quite a few names to each other. We wanted something catchy, but none of them felt right. So “he the spider” didn’t have a name until the project was almost completed. Then I went to this Stanley Kubrick exhibition and thought—Stanley Kubrick was a collector. He was so creative and did lots of great movies which influenced generations of artists and filmmakers. Stanley works with Spider too!

Q. How did you decide between telling the story in first, second, or third person?
A. I didn’t duel on this for very long. It felt natural to tell this story in third person. Stanley didn’t talk in the entire book. His thought process and conflict through the journey is internal, also instinctual. Using first person might make the story too analytical.

Q. How much of the story did you know when you began writing THE WEAVER?
A. After I saw the leaf on the spider web, I went on a short train journey. During the 45 minutes on the train, I pretty much thought through the whole story in broad strokes. Then later on, I sat down and figured out a much more fine-tuned story arc.

Q. Did you write the story first, then illustrate it? Or did the images appear before the words?
A. The story and the image sort of came at the same time. Sometimes certain images come first. I doodled the moments of what the main character Stanley would do when he collects things. The final illustration came a little later, after I had done some more research on plants. If you remember, there was a 100-day challenge on Instagram. I participated in it by drawing plants, flowers and leaves everyday, which was preparation for this project.

Q. Did THE WEAVER receive any rejection letters? If so, how many (ballpark)?
A. Yes, of course. It’s inevitable to get rejections, especially in the beginning. I went to Bologna Children’s Book Fair to present my book idea rather than sending out submissions. During the fair, I got both interest and rejections. But because I’d shown the book idea to so many people within a short amount of time, I also quickly learned that it’s quite subjective whether this publisher/editor/art director likes your idea or not. Each publishing house has their own set of style and lists of interests. Don’t let this make you lose confidence. Always look for feedback and suggestions and consider them. You might pick up some really good ones!

Q. Describe your reaction when you received an offer on THE WEAVER.
A. YAY FINALLY!

Q. How long did THE WEAVER take to be published—from the time you received an offer until it was printed?
A. 1 1/2 years. I’m not used to the turnaround speed as I normally work in advertising/animation which is always in a rush. But it’s incredible to see what goes on behind a printed book. Sometimes things take time and it’s worth waiting.

Q. Was there a part that you really loved but had to edit out? Or did you think of something later that you wanted to add?
A. I’m quite lucky. The initial story which I presented was pretty much intact. Throughout the collaboration with my editor and art director, we added a few things, improving the story here and there.

Q. Did you create any book swag for THE WEAVER? If so, what kind?
A. I haven’t created book swag but I am thinking about printing wrapping paper with the endpaper designs.

Q. What is your #1 tip to those who want to write picture books?
A. Read lots and lots of picture books. Read classic picture books - they’re classic for a reason. You can learn so much from them! And write your story ideas down—even if you’re not 100% sure yet, they might just need some more time to mature.

Q. Do you have a favorite writing exercise or marketing tip that you can share?
A. Once I joined a writing workshop with Barbara Slade who gave us a great advice. First, write down all the things you imagine that could happen in the story. Don’t judge, just write them down. Then once you’ve got enough material, look through them and edit. Use the ones that make sense, put away the ones that don’t work. You can repeat this process a few times, eventually you will get a story that can even surprise you.

Q. What are you working on now?
A. Recently I was just finished up a couple of short animation clips for promoting The Weaver (http://www.qianshi.co.uk/illustration.html) And I’m currently exploring the next idea for a picture book!